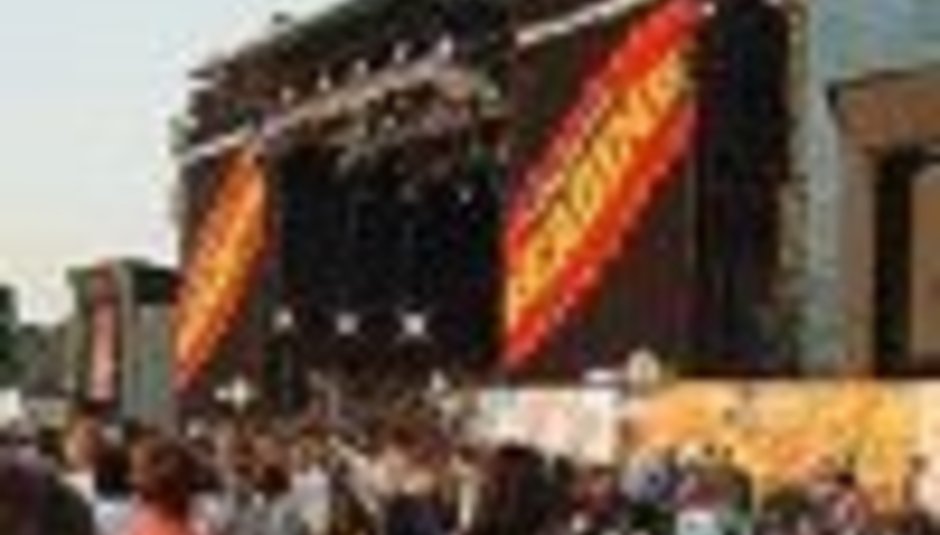 Sunday 24th August 2003 AKA Reading Festival Day 3/Leeds Festival Day 1 sees over 40 bands playing to tens of thousands of real ticket-buying people at what some say is, on balance, the best festival of the year. Want to know what to see? We're here to help with our little lists of what we're planning on seeing. Read on...

Last day of the festival, Main Stage Rock Day with some big names on show, but what's to be seen...?

1. Carling Tent: Winnebago Deal
Once again a band that I've heard good things about and Reading will be the place I first see them. Your guess is as good as mine as to whether they'll appeal to me, after all the coverage here, gigs even, they'd better be good. DiS was right about Jarcrew so I've got high hopes...

2. Carling Tent: Har Mar Superstar
If only to get a little class into the weekend, the hedgehog of sleaze-funk will be there to provide it. I'm hoping for some costume changes but really I'm just expecting him to get his kit off, get in close and let Reading feel his love...

3. Carling Tent: Primal Scream
This might not be a good idea considering I still pretend that their last album doesn't exist... but they were good - better than good, great last time they played here... what, 3 or 4 years ago? I'm pretty sure they were higher up the bill back then, but hey *ahem* that last album...

Also not to be missed: Quite a few things today, some things great and others not so, but if you're wandering around when one of these is on, drop in and see them: Lamb, The Eighties Matchbox B-Line Disaster, Kinesis, Grandaddy, System Of A Down & The Yeah Yeah Yeahs... Looks like it'll be a good day.

1. Main Stage: System Of A Down
Finitely crazy and some of the greatest pop-rock songs of all time. They guarantee 1 hour of me singing and jumping around cos otherwise it's pretty much fuck all else going on this day.

2. Carling Tent: Winnebago Deal
It doesn't always pay to leave the past behind. There are only 2 of 'em but they'll be the loudest thing in this tent since Aereogramme 3 years ago. Promise.

3. Dance Tent: Squarepusher
Bleeping madness from AFX's mate. They sound the same to the untrained ear so you'll still be able to enjoy it even if you ain't heard any before. Schweet.

Name: MG (Hippy and a Half)

1. Main/Radio One Stage: Maybe that something treads along the shimmering, piano-laden lines of Keane. Maybe that something could prove my deliverance. Alternatively, I will probably subject myself to the black ooze, the sweat drizzled grunting, the impervious head-ripping carnage; the Winnebago Deal. Oh yes.

2. Main Stage: I’m also intrigued by U.S gloomathon, dusk-stalkers Calla and their skeletal and breathless aggression that sounds so poignant and bloodcurdling on record.

Also not to be missed: To complete such dizzy heights with an extremely bewildering euphoria I’m going to trip into the dance arena to catch Squarepusher, timetables allowing, and indulge in perfect styro, bloc-bloc smoog pop. A fleeting interest in ‘Flaming Lips-esque’ space trippers Manitoba beckons me once again to the Carling Tent, where I’ll conclude a hopefully fantastic festival experience with those bird-watching bunnymen British Sea Power. Roll forth the drugs and blessed be the weather. Actually, I don’t care if it rains, but y’know…

BRING FORTH THE ROCK.

1. Carling Stage: Hope Of The States
Steeped head to toe in Billy Childish-style regalia you will (hopefully) be welcomed with open arms to the music and picture show that is Hope Of The States. From the off-set they were likened to all the things that would be set to take them to the stars, most eminently Radiohead, which can be anything but endearing. Although sweeping in and out of lethargy with post-rock-esque energy as they do, it certainly is a pretty view of them. They’re stars!

2. Radio 1 Stage: Yeah Yeah Yeahs
They’ll make you ‘gooey in a girly way’ one minute, then make you wanna let blood with punk fury the next. Unfortunately, they can be a little hit or miss, but when they hit, "that’s the hit of the whole fruit", you know when you’ve been Yeah Yeah Yeah’d. Be prepared.

3. Main Stage: Primal Scream
Who wouldn’t want to see Bobby Gillespie in the flesh? Even if it is from a substantial distance. The word ‘legendary’ springs to mind, there’ll be tears on my pillow and pain in my heart if I miss this one. I’m gonna go down the front with ‘Evil Heat’ in my eyes.