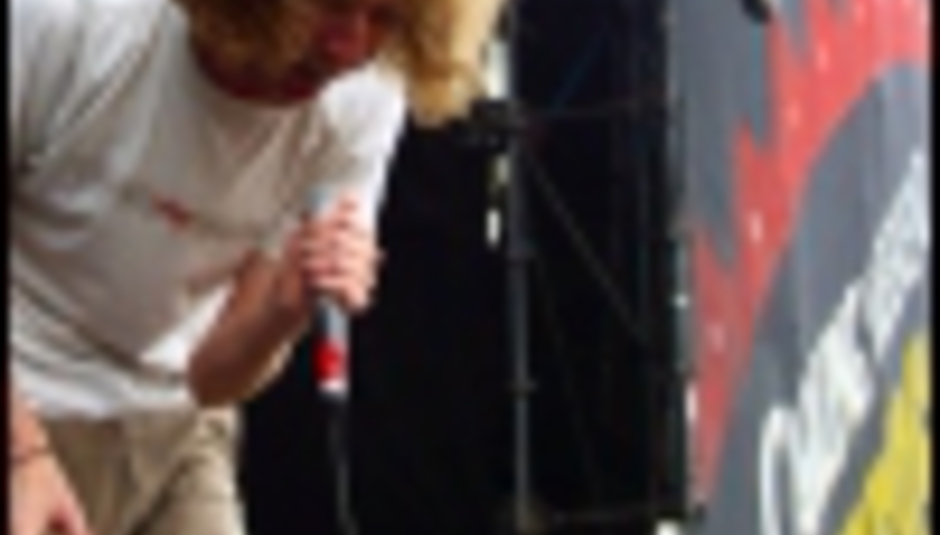 Saturday 23rd August 2003 AKA Reading Festival Day 2/Leeds Festival Day 3 sees over 50 bands playing to tens of thousands of real ticket-buying people at, some say, is on balance the best festival of the year. Want to know what to see? Well we're here to help with our little lists of what we're planning on seeing. Read on...

There are 21 'the' bands on today. That's a lot, and with The Concrete Jungle Stage looking a bit rubbish this year it's going to be hard to find some bands to see. Or is it...?

1. Dance Arena: Gold Chains
First must-see band of the day, if only for the occasional high points on his last album or the storming singles including darkly world conquering 'I come From San Francisco' Perhaps the only thing I actually want to see at the Dance Tent this weekend.

2. Radio One Stage: The Mars Volta
Although I've still got to get into their recent album, as much Bluetones as it is ATDI, this is going to be one of the packed moments of the tent bringing together the Kerrang! Kids with the old-school "I bought their albums before they split" ATDI fans. Extra points if (when) you spot members of Sparta stage-side.

3. Main Stage: The Streets
Last year in the Dance Tent, packed and confusing. This year on the Main Stage, it might just work...

Also not to be missed: Hmm.. perhaps see Funeral For A Friend as a first band of the day, then a bit of the various The bands on offer ending with The Darkness. Beck and/or AFI will be the headliners to my Saturday and I'll be on the lookout to see if any more of The Libertines have been arrested by today...

1. Concrete Jungle Stage: Funeral For A Friend
I love F4aF. Possibly gonna be the band of the weekend. Trust me. I don't love them for nothing. And neither do all those people who got their single to #19. Made for festivals and massive stages.

2. Concrete Jungle Stage: Alkaline Trio
This is pop-punk when all the colourful hair and t-shirts are in greyscale. If you can call different shades of black greyscale. You will not experience morbidity quite so infectiously anywhere else.

3. Dance Tent: Gold Chains
He's from California and he loves [ahem] pussy. He has a laptop and loves rapping. Do the math*.

Also not to be missed: The Darkness - cock-rock on the main stage, Hundred Reasons - emo arisen from the wilderness with new tunes, THE REST OF THE CONCRETE JUNGLE STAGE – errrrr.

3. Carling Tent: The Agenda are likely to feature prominently upon my first bands to watch on Saturday morning list, with their rollicking, blistering teenage maniac garage detonation proving to be somewhat compelling.

3. Radio One Stage: Stellastarr*, likened to a Frank Black hullabaloo by some and raved about lavishly by others, could also prove quite interesting. Succeeding Stellastarr* on The Radio One Stage will be glow-baked, soft-core folksters My Morning Jacket attesting that whispers can resonate louder than screams.

3. Dance Arena/Radio One Stage: Gold Chains and The Rapture will be wrestling for my aural headspace and skirmishing for the right to make me dance like an idiot; something which is synonymous in both of the aforementioned.

Also not to be missed: The Kills, and their malevolent game, smouldering between the two wired electrodes in shape of sizzling VV and sardonic Hotel, never fail to beguile me. One of the other bands I’m eagerly anticipating is, of course, The Mars Volta. The fact that I’d still eagerly anticipate them even if Cedric and Omar had shat on a microphone for their debut album doesn’t matter; it’s the reality that 'De-loused In The Comatorium' is one of the most wonderful oeuvres to be released this annum, and it suggests something truly spectacular lurking in the loins of the 'froed ones. Beck… I don’t believe that I need to elaborate further on the wondrous Mr Hanson. Saturday is fine, then. Good, good.

1. Radio 1 Stage: The Mars Volta
"I’ll reign blood on this city….bathe you in unsuspected floods….atop pyramids vested triplicates, amongst bails of used skin…." What more could I possibly say?!

2. Carling Tent: The Sights
The vocals are sketchy, the guitar rudimentary. But it’s so compelling. Something draws me towards 'Are You Green?', every time. As far as I know they don’t have the drug-adled shadow that suspends The Libertines, but they’ve got the similar slaughter-it-and-dance-on-it’s-grave passion that captivates me. Even if you don’t, I’ll be smiling... down the front anyone?

3. Radio 1 Stage: The Kills
Why will I be going to see The Kills? In a word, sex. It’s suspenders and stiletto-fuelled seduction. It’s the dirtiest, head-pounding, sweat-moistened experience you can have in the missionary position that is guitar, drum machine and exquisite vocals. You may think I’m being vulgar, but there’s nothing vulgar about it. If you do nothing else, get ‘The Kills’ stitched on your lips, then go home and make love like you’ve never done before (provided you're old enough, of course!).

And if you don't care much for our choices for the day, here's the full list of the day's lineup, any changes/updates that happen over the next few days will be faithfully reported in a last min print-out-and-keep festival update. As you know, the listings necklaces things are out of date the day they're printed.