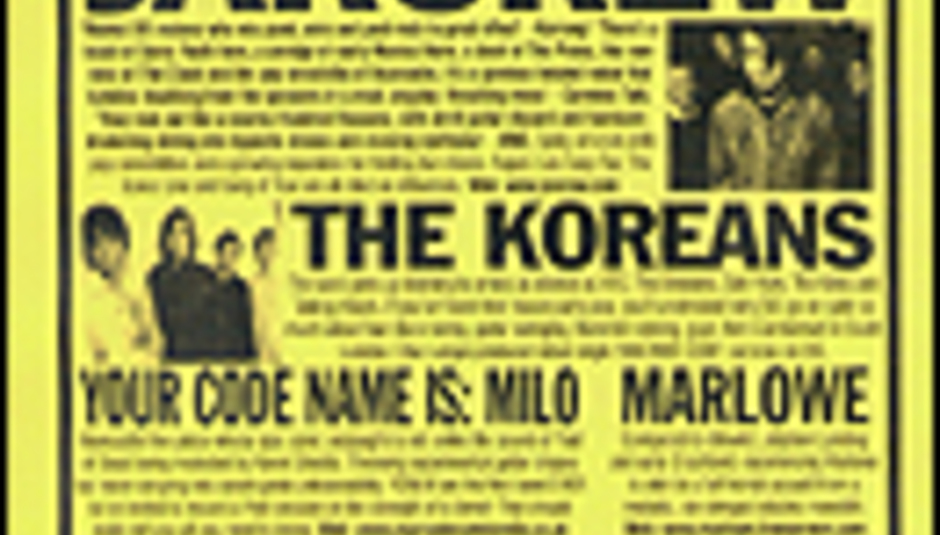 We've teamed up with the kickass folks at PURR (purr.org.uk), who're quite often named by many'a band, punters and folks like us, as the best gig promoters in the UK (argue/defend this statement on our the comments board!). They also run Purr Records, responsible for outputs such as the latest Evening Session single of the week from Intentions of an Asteroid. You can find out loads more about 'em on their website, but for now, here's the press release'ish info about our first DiS Night in one of the England's prettiest cities, Bath.

JARCREW:
Formed two years ago whilst still at school in Welsh middle of nowhere Ammanford, all five members of soon-to-be Jarcrew awoke one morning (in separate beds) having shared the exact same dream. Set in a jungle, the dream involved the lads witnessing a terrified Michael Jackson being chased by a machine gun-toting Axl Rose. A hole swallows up Michael who soon finds himself in deep philosophical conversation with a subterranean Marlon Brando. They are soon interrupted by an ill-mannered Axl who rudely butchers Marlon mid sentence. Axl is then himself slain by Michael, the whole experience turning Michael white with fear.

Of course, Jarcrew saw this as a definite sign that they should all buy instruments and form a band (who wouldn't?). The band's growing reputation is for their thrilling live shows, built around the antics of frontman Kelson Mathais (part Henry Rollins, part Howlin' Pele) and their mental singing drummer Rod. Fugazi, Les Savy Fav, The Icarus Line and Gang of Four are all cited as influences.
Website: Jarcrew.com.

The band have recently signed a deal with Gut Records and will be re-mixing 'Breakdance Euphoria Kids' for re-release later in the year.

"Mental UK rockers who mix punk, emo and post-rock to great effect." - Kerrang! (KKKK)
"There's a touch of Sonic Youth here, a smidge of early Manics there, a dash of The Pixies, the rawness of The Clash and the pop sensibility of Buzzcocks. It's a glorious twisted noise played by kids who are still getting the hang of power chords and synths, that tumbles headlong from the speakers in a mad, angular, thrashing mess." - Careless Talk Costs Lives
"Jarcrew look set to fill the At The Drive-In void." - Radio 1

THE KOREANS:
Introducing The Koreans, a refreshing assault on the music world, who released their limited edition debut single, 'Machine Code', on 21st July on the Drowned In Sound label.

Formed 5 years ago in South London, they have known each other since school. The Koreans HQ is in two railways arches in Camberwell where they live, record and rehearse. The band grew up listening to artists as diverse as XTC, The Breeders, Daft Punk, The Kinks and Talking Heads.

Excited comparisons seem to vary from Soulwax to Rialto (!?!) to Rolling Stones to Fountains of Wayne. If you've heard their house-party pop, you'll understand why DiS go on quite so much about four disco loving, guitar swinging, theremin rubbing, guys from Camberwell in South London.

"...a fantastic tirade against scenes." - RockSound
"...damn catching tune... there's definitely something unique going on in Camberwell" - The Fly
"..the urgency of The Jam with the inquisitive cool of The Dandy Warhols" - Virtual Festivals
"Thanks to The Koreans...Trying to keep up with all the new bands that are good is almost impossible. Best scene for new bands since 91-92" - Alan McGee

YOURCODENAMEIS:MILO :
YCNI:M are a Newcastle five-piece whose epic sonic onslaught is not unlike the sound of Trail of Dead being molested by Kevin Shields. Throwing experimental guitar shapes but never straying into avant-garde unlistenability. YCNI:M are the first band EVER to be invited to record a Peel session on the strength of a demo! That should really tell you all you need to know.
Website: yourcodenameismilo.co.uk

MARLOWE:
Marlowe are serious guitar drama, with no less than three singers (who all play guitar) in their musical artillery, each lending his own individual style to the bands' sound.

Their tunes are tough and memorable, with strong, hook-laden vocals, pounding rhythms and inventive guitar interplay, keeping their live set fresh-sounding and inspired throughout. Compared to Idlewild, Jetplane Landing and early Crashland, experiencing Marlowe is akin to a full frontal assault from a melodic, six-stringed electric monolith.
Website: marlowe.freeservers.com

"Marlowe are a firestorm: Spreading it or fighting it? Military or civil? Dunno (sounds political). Two guitars and a bass almost orchestrated, and a drummer that does it all over again. Last number, the bass comes through like your pulse bursting or the sound breaking up completely, and it's clear nothing could possibly stop them tonight. That is THE rock experience, anywhere, anytime." - Venue Magazine

For more info and to find out how to get a show in Bath, visit purr.org.uk. Or join our DiS Bath mailing list here:

We'll also have copies of our Free Drowned in Sound Magazine and Badges available for everyone in attendance (whilst stocks last!).