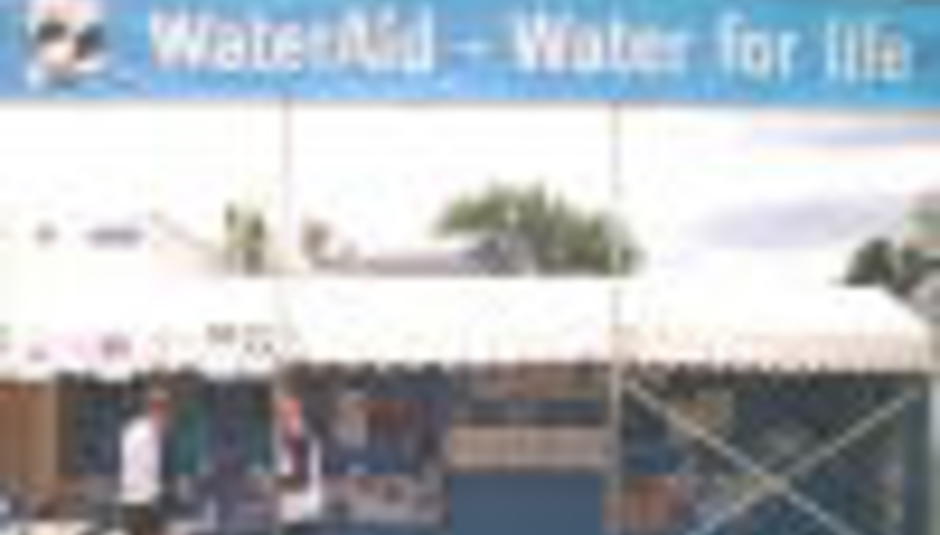 It’s Glastonbury time again, and whilst we all froth at the mouth at the prospect of five days of whacked-out, solstice bliss in the Somerset countryside, we should remember the wider implications of the festival.

Throughout the eighties Glasto was known as the CND (Campaign For Nuclear Disarmament) Glastonbury Festival, and though it no longer has that monicker, its profits still go to charity and its message as a prominent supporter of politically charged good causes is louder than any bombs.

Set up in 1981, WaterAid has grown and developed into a highly respected international organisation. It is one of the leading international non-governmental organisations in the global drinking water sector. For 22 years WaterAid has been working towards a world where everyone has access to clean water and sanitation. So far it has ensured a brighter future for over 7 million people in Africa and Asia and influenced many other organisations to do the same.

WaterAid works in 15 countries in Africa and Asia. Through partner organizations in each of these countries, it uses practical solutions to provide safe water and sanitation to the poorest communities. So that health benefits are maximized, all its water projects are integrated with improving sanitation and hygiene knowledge. WaterAid works with families in their communities, paying special attention to the role of women, to enable them to take ownership of these projects and to maintain a lasting supply of safe water.

WaterAid projects use low cost technology appropriate to local conditions. It costs around £15 for WaterAid to provide a lasting supply of safe water, effective sanitation and hygiene education to a person in the developing world. It costs £100 to train 10 members of a village water and sanitation committee in Ghana to manage their own projects. It costs £25 for a health worker to teach hygiene education to 200 families living in an urban slum in Bangladesh.

These are pathetically small amounts when you consider how much money we spend on simply drinking for an evening.

WaterAid has been involved in Glastonbury since 1994, with involvement increasing all the time. It now receives about £50,000 in donations from the event, and lots of other benefits such as the auction of Kurt Jackson's art from Glastonbury Festival (which raised £30,000 in March 2003) and the Glastonbury Mature Cheddar cheese, on sale in Sainsbury's with 10p per kilo going to WaterAid.

Glastonbury is of vital importance to WaterAid. It's an ideal environment to get its messages across as water and sanitation are top of most festival-goers concerns. We all spend enough time moaning about lack of running water and toilets – and we’re only there for a few days! Normally it only requires a short walk. Imagine living in that situation and having to walk many miles.

Glastonbury gives an organization like WaterAid the chance to raise its issues and profile to literally millions of people without costing a penny in advertising. It’s a wonderful and unique opportunity that is impossible to recreate anywhere else. Through the BBC's televised coverage across the world and with web partners like VirtualFestivals also helping to bring the festival to millions through the power of pictures, the visual message of the stage wide WaterAid poster ensure that it resides at least somewhere in the back of people’s minds.

This year WaterAid are asking for bands to agree to be photographed for a portrait. They want to put these photographs up for auction later in the year to raise vital funds. They are also requesting any other well known people at Glastonbury to agree to be photographed with their campaigning messages to help spread the word that ‘1.1 billion people are still lacking any clean drinking water and 2.4 billion people have nowhere to go to the toilet’ causing terrible sanitation problems.

WaterAid will also be asking celebrities to come into their backstage tent and create a design (using art equipment supplied) which will be put onto charity plates for sale with profits to charities like WaterAid. So far, stars like Ewan McGregor and Samuel L Jackson have released their designs for their favourite charities.

WaterAid's African pit latrines will be in full working order as usual, the cleanest loos on site. They have a team of volunteers keeping them in order and queues of up to 45 minutes to use them! Those queuing will be kept entertained by a singing angel and an exhibition of photographs from WaterAid's work in Ghana. They will also be giving out water to thirsty festival-goers by the main Pyramid Stage and running a Water Carry competition, highlighting how much water is used in the developing world as compared to the developed world where they have to carry the water they need to drink. They’re also helping Glastonbury with environmental and health and hygiene messages around the site, including turning off taps properly, washing hands after going to the toilet and don't piss in the stream!

There will also be WaterAid costumes at the event – brave volunteers will wear giant tap, toilet and for the first time this year a brand new giant turd costume. These costumes are the ideal way to draw attention to issues which have some serious messages.

The UK government provides funds for some WaterAid projects and in addition, WaterAid works closely with the Department for International Development to add their direct experience of working with the poorest communities in Africa and Asia to improve their water and sanitation projects. WaterAid has very little staff members working overseas - about 200 directly employed. It is associated with around 2000 people who work for local organizations in each of the countries they work in. These organizations are partnered with them and directly implement projects with advice and funds from WaterAid.

WaterAid expects to raise about £50,000 directly from Glastonbury, which could help over 3,000 get access to safe water, effective sanitation and hygiene education for life. The other benefits are harder to quantify but include greatly increased public awareness of the cause and interest in working with WaterAid from all sorts of quarters.

Festival-goers can read up on Glastonbury's environmental guidelines, but WaterAid would particularly ask them to use water wisely, DON'T piss in the streams and don't throw rubbish down the toilets. It’s likely to be quite warm, so keep yourselves thirst free, but don’t use environmentally damaging cleansing products if you’re one of those clean folk showering, and keep your rubbish in bags.

With Radiohead, Sigur Ros, and Suede, it’s gonna be the weekend of a lifetime, and with a bit of thought maybe you could change someone else’s life too.