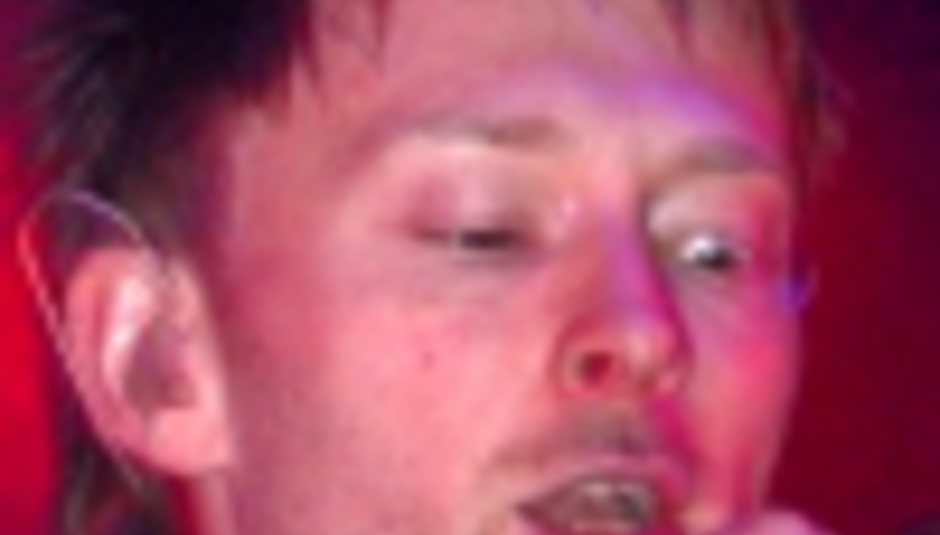 by Andrew Future May 26th, 2003
DiS-scribetographer Andrew Future ventures into the Radiohead photopit at the second Shepherd's Bush show to snap and stare. But something happens.

This is not a review. Ignore the tin. Don’t give me any of that message board crap about lack of focus or writing selfishly in the first person, etc. This is a rant.

Caked in sweat and still buzzing from an eighteen hour stint at Homelands I’m waiting anxiously for EMI’s Director of Press to give me a ‘generic sticky pass’ allowing me to take my bag of cameras to within inches of Radiohead. It wasn’t left with my ticket and the Shepherd’s Bush front of house people are being typically unhelpful. Mental note; do not be rude to them and do not fuck things up.

Chances are, like everyone else, I’m never gonna see Radiohead in a venue this small again, let alone photograph them. Best behaviour. Be on.

The last time I shot Radiohead was at the Spanish festival, Benicassim, last year. The photopit was rammed and no one could move. The lights were off, and few people got any decent photos. Tonight is a different story. Everyone else must’ve gone last night, because there’s plenty of space in the pit tonight, and this being a TV gig, the lights are up, too.

Unlike many of the people here I’m not obsessive enough to know every subversive meaning behind every song lyric, but still I’ve been a massive Radiohead fan ever since the Melody Maker warmed me to their long gone guitar genius. I know that ‘Talk Show Host’ is an old b-side and not a new song but I couldn’t recite all the words. The bit about the sandwiches and gun yeah, but not the rest. It has. Guitars. Guitarists. Not drummers. Birds. Not bitches. Etcetera, etcetera, as Morrissey sang.

You ponder the value of having one of the true master guitar players in the world confined to synths and strange electronic voice warpers for much of their recent output, or to a large drum, as Jonny Greenwood is on opener, and new single ‘There There’. Two-thirds in, as Greenwood grabs a Fender, the genius is back. Returned. It’s damn fine; swinging behind schoolboy hair like ‘Creep’ was. They don’t play it tonight but they play ‘Just’, which is close. But it’s slow and doesn’t rock like ‘2+2=5’ the opener of ‘Hail To The Thief’ which you all already have, right?

Clever, humorous, intelligent, original aren’t words you’d banter about new music, are they? Rocking, yeah. Catchy, uhuh. Are you telling me that Hot Hot Heat have changed your life? Or that you’ll still be unveiling the intricacies to 'See This Through And Leave' twenty years from now? Let’s not start on Biffy. Progressive stuff like Aphex and Four Tet is all well and good (I do love the new Four Tet LP, ‘Rounds’), but as soulful as electronica can often be, without a vocal and lyrics, how can it have as much heart?

DiS writer, Genevieve, remarked to me recently that I don’t seem to enjoy gigs that much, and in truth I rarely do. I go to so many ‘buzz bands’ and ‘hot gigs’ that everything washes over my head. The Dandy Warhols played a similarly lengthy 130 minute set last Friday at Brixton, and mostly it bored me shitless. They don't have the canon of songs needed to do that in such a large place and the pace never changed. The crowd went for two songs and got twenty they didn't know.

I don’t care how this sounds, but the point is; being sardined above a pub watching A&Rs wave chequebooks in front of pretenders like the 22-20s and every other fucking band that has two week's of fame numbs you to the brilliance of live music. The 22-20s boy is a great guitarist but where are their songs? Where are the melodies that chill you and the lyrics that can save your life? These people don’t have the emotional disposition. Those that do, like Hope Of The States sadly lack a front man with the vocal aptitude of the mercurial Thom Yorke. Even little spikey haired Matt Bellamy has yet to come close to anything like ‘No Surprises’ or ‘Karma Police’. Their last LP rocked. Few people touch Muse, for sure, but ‘Unintended’ is one his few really heartfelt compositions. (I have a huge photo of the bloke above my bed that I took in Cambridge, so don't start calling me a Muse-hater either.)

They should encourage bullying in schools, it’ll make future music better. Give it more feeling.

And there lies Radiohead’s true calling for many. They make you feel. They envelop you in Thom Yorke’s warped phsyche.

“Does anyone else have dreams about floods?” he quips before they encore with ‘Pyramid Song’. Of course we fucking do. We think so much that we’re never satisfied and we strive so fucking hard for perfection we fuck things up. Acceptance.

The same kind of acceptance we need to have about Radiohead. They’ve made ‘OK Computer’. They ain’t gonna make another one. (If you don’t see the true magnificence of this record, you’re missing out beyond all belief.) The new album, ‘Hail To The Thief’, which most of the crowd tellingly sing along to, is pretty damn fine, but its sound is in the same production sling as 'Kid A/Amnesiac'. The guitars don’t leap out, and it sounds a bit processed. Live, tracks like ‘Idioteque’, ‘Everything In Its Right Place’ and ‘Where I End And You Begin’ are mesmerising. The bassy halogen of dance music, cured with the blood flooding soul of, well, Radiohead.

Their rhythm guitarist must get a bit sick of doing nothing during a good third of the set, though.

It’s one of those gigs where you don’t get time to think. Too much anyway. I contemplate whether the pulsing bass would be more trippy if I was on something more potent than a three pound beaker of rat’s piss. I stamp my feet to the drums during ‘Paranoid Android’ and contemplate how any band can have the audacity to write an epic-arsed rock song and fuck it up around a churning of four-four and seven-eight timings. I tell this ugly voiced, common sounding girl to ssshhhh as Thom embarks on a (third) solo encore of the ultra-rare ‘True Love Waits’, which he duly fucks up twice. I say it in my head first and then I do it. She shouts back. Slag.

Why the fuck would you go to the trouble to obtain a ticket to something like this and then chat about your pointless life during the most moving moments? Slags.

And they are the most moving moments, because, for four minutes, Radiohead are about hope, the future of love and beauty. Not backdrifting, or muddy rivers of corpses, but love. "Your tiny hands, your crazy get-up smile…/True love waits in lollypops and crisps…" Thom comes down to Earth. Stripped of his band and lacking the need to have an ego he ends what, for me, was the most amazing gig I’ve ever seen. And I have photos to prove it. You can see them and read my actual review here.