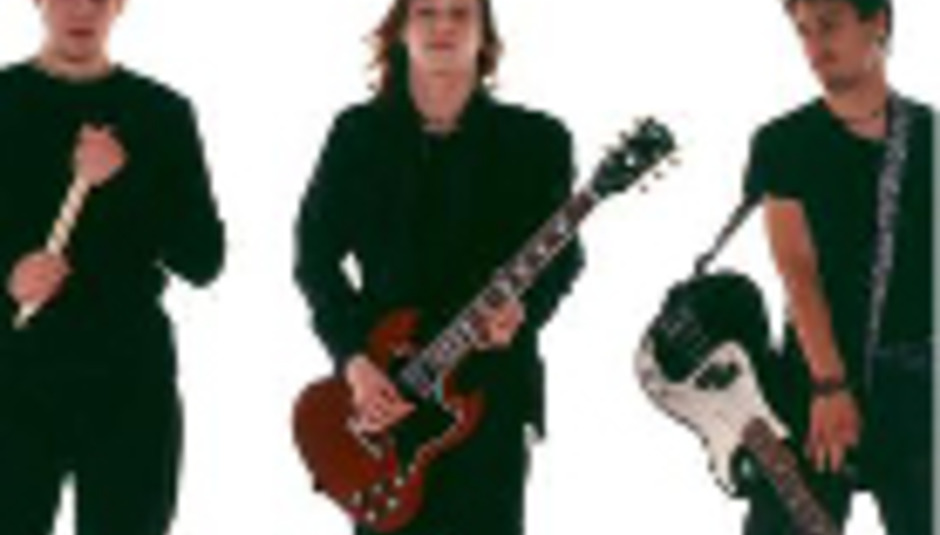 Today was pretty cool. I got up and had a great boiling shower and then had some breakfast and did some interviews etc. Chilled out for most of the day and our security dude has nearly completed Grand Theft Auto – Vice City!

The show today was incredible – the crowd were really vibing and I think that helped our performance a lot. It’s great seeing hundreds of people jumping up and down to one of your own tunes. It was a shame to finish the show but our new ending worked well – lots of feedback.

After the show we had a quiet one and chilled out socialising then slept in a cold bunk.

Hey there! Woke up feeling good, had a shower and then went down to Café 306 (a student café for healthy foods). Got myself a potato and pasta salad and a Mexican bean wrap – good stuff. Anyways, soundcheck was nice and easy and then we did some interviews. Outside the tour bus a girl gave us dog tags with our names, job in the band and the InMe logo – now that’s devotion!

Walking onstage at the MDH is absolutely awesome. The show was incredible and there were apparently 950 peeps at the gig and 200 were jumping like crazy to our tunes – a great feeling. After the show we went down to a bar because it’s Abiss’ (our lighting dude) birthday tomorrow. Had some raspberry beer which tastes like champagne and on that subject, we got a couple of bottles of champers from the promoter which was really nice. Had a cool night but retired when my head started to spin. Zzzz…

Today was a great day, certain members of our crew taught us a valuable lesson – don’t stay up all night until 9.30am with two bottles of vodka and then with only two hours of sleep, go out bowling still pissed! Anyway, we went bowling for Abiss’ birthday and we met up with a few of our friends from home. Basically we chilled for the rest of the day.

Then we thought it would be a good idea to go out clubbing, so we found a rock club and danced and drank until some stupid time in the morning and staggered back to our hotel for a sleep. But no, our merch guy and I thought it would be a good idea to wake up two members of the crew at about 3am for a smoke. I’m not sure how but I managed to find my room – sounds simple but not for someone who has been out on a heavy night. Anyway, I found my room and fell unconscious. I’ll leave you in the capable hands of Joe for tomorrow. Bye!

Hello! I hate the way every day seems the same in this diary. Still in Norwich today, at the Waterfront venue and I bought a new wallet as Edinburgh police still have my old one!

Played a cool show, Biffy Clyro were as good as ever and Serafin joined us today – I checked them out too. Managed to stack it during ‘Mosaic’, I always get too into that song! Anyways, I apologise for boring you.

Joe xx. (Joe drew a picture of Zippy under this entry – Ed)

OUR DEBUT ALBUM RELEASE!!! Woke up and walked down the seafront a few times…some great sunshine and sea air. Later on we did a signing session in a HMV Megastore which was cool. Signed everyone’s stuff and then got two C.D.’s. I got The Haunted and Mr. Bungle. We then went to the venue and soundchecked until dinner time. Got myself a Thai which is really good food followed by some more fresh air and exercise!

The gig was awesome, the crowd was vibing and it was a really enjoyable show – apart from the dentist anaesthetic all over my microphone! It made my mouth go numb so I doubt anyone knew what I was jabbering on about! Had an early one tonight…

Today was a very hectic yet successful day. First, we had to play a show in Virgin Megastore, which went smoothly…but it is weird playing in a shop. Then we did a signing and there were so many people in the queue!! In between interviews and stuff we fitted in a shower and a soundcheck. I got ‘Porcupine Tree’ and ’36 Crazyfists’ as my CD preferences from Virgin.

Eventually we hit the stage and the gig was absolutely awesome apart from a few technical problems! The vibe was great and it was the perfect way to finish a very hard day.

Woke up feeling tired (serious lack of sleep) and got in our cab to do an acoustic session. Before we got in the cab, Ricky Gervais strolled past us. Acoustic session went very smoothly, I did a very mellow version of ‘Crushed Like Fruit’. We then proceeded to do a signing session in Colchester. The signing was cool and we got some CDs and gifts, which was nice.

We then went for dinner at Wagamama’s, a futuristic Japanese restaurant. Soon we were able to get back on the bus and we retired for the night.

Hello, Exeter was a weird one for me. I was pretty ill so spent most of today walking about in a fever, not really knowing what I was talking about or doing which makes interviews pretty hard.

The show was cool, managed to see some old friends afterwards, including my old boss from work which was so strange as he used to order me about! Got talking about the old days with the band and how far things have come since. I’m glad that people are proud of us (for once!)

Anyway, this fevered talk is over. Thanks for listening,

Today I had the biggest fried brekkie ever – it was about a foot high off the plate! I thought about going skiing but I had a show to do and knowing me I’ll most probably snap most of my bones.

Later on we had a signing at HMV and we met some more of our crazy fans. Anyway, the gig was in what looked like my old school sports hall but it was a crazy night – might be the craziest so far.

After the show we chilled with the Biffy and Serafin boys then went back for a quick chilled night on the bus. I’ll be back here to bore you again soon,

Hey, I’m back. Today it took about half an hour to find the showers but thankfully I did. We got some prizes from interviews today – Joe managed to get “The Fist of Fury” and I got an orgasm badge.

The gig was cool and I met some old chums from home and talked shit for ages. Again, we chilled with the Biffy and Serafin boys after the show. Then chilled on the bus again while on the way to Bristol.

Did I bore you as much as last time?

Today was kind of cool but sad in a way because it was Biffy Clyro and Serafin’s last night with us – great bands and great guys.

Did a photo shoot a little earlier before soundcheck. Dinner was good but I can’t remember what it was! (That’s a first! – Ed) I got a little behind on the old diary!

Today’s gig was awesome, the crowd were rocking even though stage was too low to see most of them. After the show we chilled out with Biffy, Serafin and the Redefine boys (based in Bristol – good lads) and bid them all farewell. I’ll miss ‘em. Anyways, we got a day off in Cardiff tomorrow and it’s the last show of the headline tour – it went too fast!!!

Today was uneventful and depressing for me – I lost my voice! I slept as much as I could but I did pop into Cardiff and got myself Meshuggah – ‘Nothing’ and Gun – ‘Swagger’ – both good albums. I also watched ‘Ghost Ship’ at the cinema with Keane and Simon (not a good idea considering we are going on a ferry tomorrow!)

Had a meal with John, our manager, to celebrate our debut album hitting the charts at No. 15 and I drank brandy to help the vocals. I then hit the hay for fourteen hours!

This is technically the last day of our headline tour so ha ha! hope you didn’t get too bored reading it all but if ya did – never mind because we had a fucking cool time.

Today’s show was pretty crazy because of the crowd surfers knocking the mic into our teeth, kicking the poor folks at the front and generally kicking our pedals but hey, the crowd still enjoyed it so hurrah!

To all the true followers of InMe…thanks for making this a truly real experience – we’ll miss you until next time when I doubt we will write one of these because it is certainly not our forte…neither is my shitty handwriting!