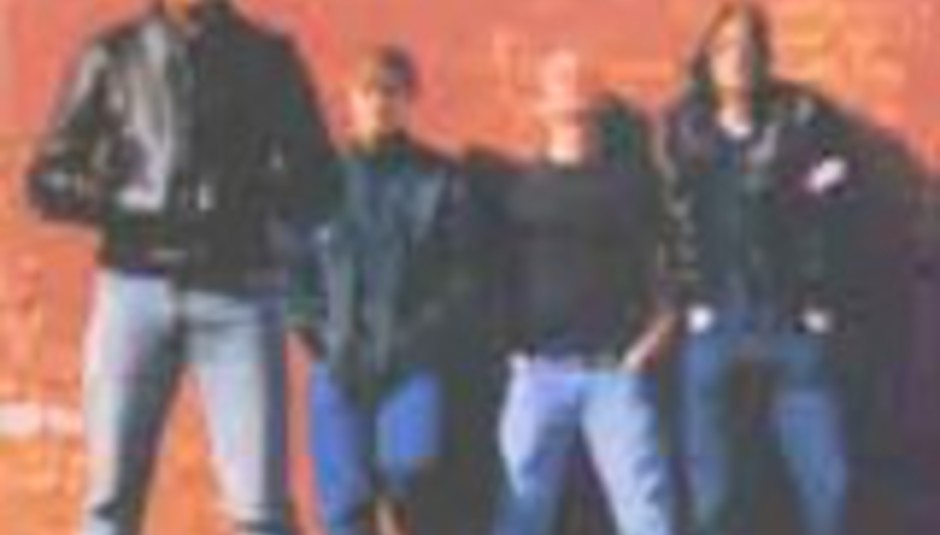 Nottingham based noise terrorists FACE are currently whipping live audiences into a frenzy up and down the country with their Verve-tinged feedback-singed eardrum bursting sonic assault.

Although the core of the band, Andy Shipley (vocals & guitar), Sean Brooks (bass) and Jon Knowles (drums) have been playing together for five years, it was only with the more recent addition of guitarist Dave Startin that Face began to hone their definitive sound to perfection.

I caught up with them on the eve of their biggest UK tour to date, which sees them take to the road throughout the majority of April and May culminating in a show at the London Archway Tavern on May 24th:-

Do you think it’s possible to categorise Face in terms of any current scene or movement?

Dave: Crud-rock!
Andy: I think I’d say club rock - create a new genre. I don’t think it really matters how different you are in terms of other bands or scenes it’s more a case of how good you are. You can’t stick yourself onto any scene otherwise when that scene dies, so do you…

What records made you want to form a band in the first place?

Andy: For me it was ‘Definitely Maybe’. In fact, I used to buy every Oasis release religiously, sometimes before I’d even heard it on the radio, for about two years. I think that’s the difference between when I was a teenager just getting into music and now. There just aren’t enough bands who are worth caring about at the moment.
Sean: I can’t really say one record, because I was into completely different kinds of music to what the others were before I joined the band.
Dave: I think what Sean is saying is that because he lived in a remote Derbyshire village called Shirebrook, he got into music through the other two. I mean he wouldn’t have been as exposed to punk rock as someone living in a city.
Jon: But punk rock is shit!
Dave: Why is punk music shit?
(and there ensues a ten minute "discussion" between the guitarist and drummer over the merits of the Sex Pistols).

What about your lyrics? Did you try and structure them around any particular songwriter’s style of writing?

Andy: It’s probably not the "coolest" reference point but I have to say that Noel Gallagher was the one person that inspired me to start writing songs. I mean he proved that you didn’t need a degree in English Literature to be able to write fascinating lyrics. I don’t think we’ve ever based our songs around the way either he or anyone else writes though. I mean, we don’t sit around and just analyse people’s lyrics. I get a similar feeling when I listen to Joy Division. There’s just something so powerful, so moving about the way Ian Curtis tried to get his message across.

So which comes first, the title or the song?

Sean: It depends really. Usually we’ll just jam for a bit until we come up with something and then Andy will write some lyrics for what we’ve been playing and sometimes we add bits and sometimes we leave it as it is and other times we might scrap the idea altogether if we don’t think the finished piece is good enough.
Andy: Some of the time we can have a whole song laid down in less than an hour, like if I just sing along a set of lyrics to one of the jams we’ve been playing and it sounds great (e.g. ‘Kerosene’), whereas other times we might start off with an idea that doesn’t end up as a finished piece of music for weeks. I think when it comes to writing lyrics I’m not one of those people who can just sit there and think of a title or brainstorm a set of scenes around a word or whatever. If I have an idea for a lyric whether I’m in the rehearsal room or on the bus or sat at home watching the TV, I tend to jot them down rather than structure lyrics around them, and eventually the song will come together using many different ideas and experiences. I think some songs really do warrant great lyrics and vice versa. It’s like when you listen to ‘The Holy Bible’ by the Manic Street Preachers. There are some amazing words on that record but some of the music is just so unlistenable that it detracts from the whole piece. We have a song called ‘You Don’t Have To Tell Me’ which I think is incredible, so I made a conscious effort to make sure the lyrics throughout that song were up to the same standards as the music.


You have a song entitled ‘Bring Up The Phlegm’. How did the lyrics come about for that one?

Andy: We were rehearsing in the studio one day and I was really ill, all snotted up with a cold and I was having to stop during the song every so often to, bring up some phlegm!
Sean: So we just thought it sounded pretty catchy as the title for the song…
Andy: There’s no hidden meaning or anything. The song isn’t even about being laid up with the ‘flu or anything. I hate it when bands try and make out they’re being ambiguous in order to appear cleverer than they actually are when they’d might as well be talking about the weather or the paint on the walls or whatever.


Would you ever let some manager or record label tell you what to do?


What if someone offered you a ridiculous amount of money beyond your wildest expectations?

Andy: We’d never change what we do, not for anything.

Not even to advertise some hi-tech product that got you a multi-million pound sponsorship deal that funded the next five albums?

Dave: No.
Andy: It’s like winning the lottery. If our six numbers came up now it would ruin our lives. I wouldn’t know what to do with that kind of money.

So you’d never compromise anything?

Andy: I don’t think we’d ever think about that. When you consider how long this band’s been together and we’ve never even thought about making money, so there is no way we’d ever even dream of selling out.

But surely if you’re selling records, by whatever means, that could be classed as "selling out" to some degree?

Andy: Yeah, I can see what you mean, but I don’t necessarily think that just selling records could ever be considered as selling out, whereas if you change your sound or your image just to suit a market trend or record company executive is taking it to a different level entirely. You need to be able to draw the line somewhere.

Would you agree though, that Face’s sound has changed, or rather developed itself over the last year?

Andy: Yeah, definitely. Over the last five months I think I’d say. I think since Dave joined the band really we’ve been gradually building up into what you hear today. I’ve always liked writing songs and I don’t think that side of it’s changed too much, and we’ve always had quite a few heavy sounding songs in the set, but with Dave’s style of guitar playing being so central to what we’re doing now I think that edge is what distinguishes us from most other bands who are around at the moment.

You seem to have transcended this progression to your live performances. Would you say playing live is a big thrill to the band?

Andy: Definitely. I think we had a period when Dave first joined the band where we may have been pulling in different directions in terms of what we wanted to achieve, but that transition period is over now and people have commented, particularly after our last few live shows, just how far we’ve come in the last year or so.

Obviously with people like Seachange gaining more attention from a wider audience, do you feel Nottingham bands are getting the recognition they deserve?

Andy: It’s good that people are listening to these bands because of the music they’re making and not because they come from the right places or know the right people. I think what astonishes me more though is the attitude of some people in Nottingham, who seem to dismiss local bands rather than embracing them when they’re on the verge of breaking through. It’s like with Six By Seven years ago, nobody wanted to know them around here until they’d made it in London.
Jon: I think one thing that sets us apart from other bands in Nottingham is Andy’s attitude to writing and delivering timeless, classic songs.
Andy: That’s why we don’t like being categorised or classed with other bands, because when that happens it can affect the way you write, and you end up writing in one particular style to suit a specific audience.
Dave: I think we stand apart from everyone I’ve heard anyway.

What about mixing music and politics? One or two bands are getting involved with anti-war demos and the like. Could you ever see Face doing anything like this?

Jon: I think it’s so false what Coldplay are doing.
Dave: Yeah it’s sad to see bands jumping on bandwagons, especially when the war is just about over.
Jon: I think what must be going through their minds now is that since the war began public opinion has swayed so more people actually agree with it, so does this mean Coldplay are going to come out and say it was good, after all?
Dave: I honestly don’t believe that Coldplay have any kind of opinion or objective other than to increase the sales of their records. I think music and politics can be quite synonymous in the way you express yourself but…
Andy:…I don’t see us as a political band. Of course we have our own beliefs and views but is it really up to us to ram those views down other people’s throats? We have wrote songs in the past that have been political but on a local basis, like the closure of a factory and how redundancy has affected people we know, for example our first release ‘Little By Little’ could be politically related.
Dave: I think we’re more touched by everyday life and social issues, and if that is construed as being political then fine. I think I actually feel impolite if I’m asked to express my opinion in public on how and why I should vote for or against a particular subject.

What’s your main ambition for the rest of the year?

Andy: To make a fantastic first album, maybe even the best record that’s ever been made. I wanna play with this band and at this moment in time I don’t ever want to stop playing.
Jon: …and then when we’ve made that first great record, write another one.