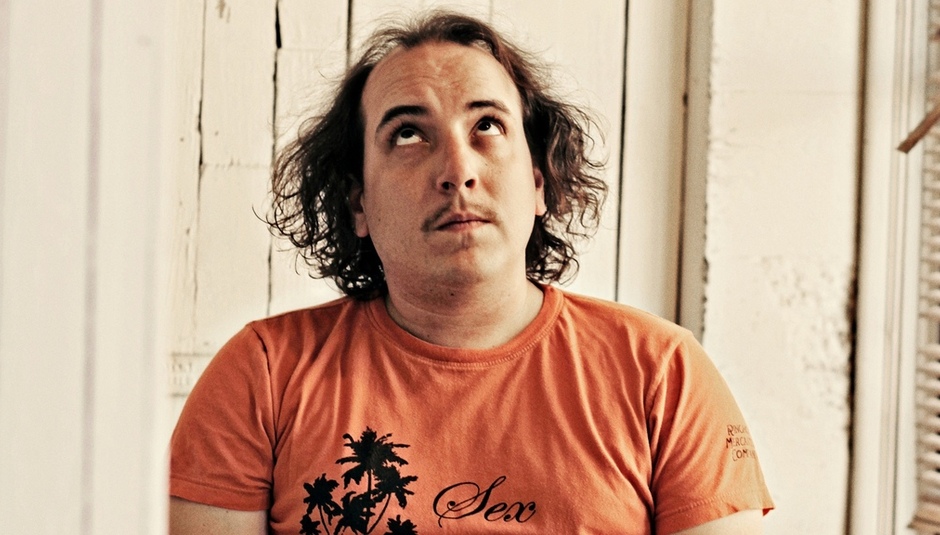 Har Mar Superstar named after the mall a block from the house where I grew up in Roseville, Minnesota. The mall itself takes its name from its founders, Harold and Marie Slawik. It boasts such swanky shops as T. J. Maxx (the US equivalent of T. K. Maxx), Northwestern Bookstore (a Christian store), and Pet Connection. The H. M. S. is a smiley, funny little guy whose frequent giggling offsets his “I’m the shit” attitude. And he can get away with it, because he really is the shit. He puts on the most kick ass show you’ll ever see, girls snog him from the stage, he strips down to his pants and shakes his sweaty thing all over the crowd and they eat it up. I think this guy is everything that is right about the American indie pop scene.

We had a lovely dinner at Ichiban in Glasgow, and I only harassed him for a little bit…

HM: “I’ll take a chicken katsu bento box…ummm…some nigiri—hey, how are you? to a little red chubby cheeked girl at the next table. Her cheeks kinda look like sushi.”

He tells me to make sure I tell people about “Spirit Shadows, it’s by far one of the best stores in the mall.”

_Is that the one with the wooden geese? _ “No it’s more like the Native American store, they make those like calendars with your picture in them, and like the t-shirts and stuff. It’s really shitty, and awesome. Also the cub scout store”

_Yeah, the cub scout store with the scary mannequins with the wigs on. _

“Yeah, and you can buy really good shirts there and stuff. Pretend that you made it really far in cub scouts. With the badges.”

What has gotten you to where you are today?

“Just being able to throw the ultimate party wherever I go, and ah, not be star-struck by anyone, because I don’t know, I don’t really care what your status is—-I’m just gonna be the best. The best at any party.”

What made you want to cut your hair into a rat tail?

“Um, all the Ron Jeremy comparisons, and the fact that I’ve really needed a rat tail for a long time. This was just getting to be the right time. 2003 ushered in the rat tail—the Year of the Rat… I think, it’s probably not but…ha ha, ssssshhh!”

Yeah, I’m a horse too. Last year was my horse year, my Chinese friend told me, but maybe not the year of the horse…

Yes, umm, but so how did this all set off? Last time I was at home, not this last Christmas but the one before, you were famous around the Midwest and other parts of America, but now all of a sudden it’s like ‘ping’ and people know who you are in Scotland.

“Umm, well, mainly over here it’s my album—I finally have a release over here but I don’t know, I did a tour in the UK with the Pattern and the Beatings in August and I played at King Tut’s and all over the UK and I did this show at Reading… I wasn’t supposed to play but I ended up getting thrown into this tent, it was the Orange tent where the Hives were doing a DJ set, and they gave up half their DJ set to let me play. So I did it and it was raining so all these photographers came in with their cameras to get out of the rain, then I was basically like an asshole to everybody, like “Put me on the cover of your magazine you fucking idiots, I’m gonna be famous in your country, make me rich!” and then… it worked, and now they do.”

So, why do you know Kelly Osbourne?

“Ahh, I did a lot of the photos for the album in her house ‘cause we have mutual friends, and we needed to use her carpeting. She’d already heard the album and liked it, and we just hung out. And like 10 minutes after I met her she invited me to go to the MTV Music Video awards with and, I don’t know, we just hung out. She likes dirty, dirty boys. So we started hanging out, and that night she and Sharon asked me to write for her album, so they flew me to New York to record it after I wrote it and I’ve just known her since then and I’m gonna go on tour with her starting next week in the US.”

So exciting! Um, so do you think now that you’re gonna end up being big mister Superstar living far away from home?

_But don’t you love Minneapolis? _

I love it too, but I’m here for a PhD, so I have an educational excuse

“I’m getting a PhD in entertainment. There’s no time for that—-I’ve already conquered Minneapolis. What’s left to do?”

Yeah, it’s kinda incestuous over there…

_I don’t know… wait a minute, who’s interviewing who here? _ (much giggling)

I actually wouldn’t mind, but that’s because it’s such a nice place where people are nice…

“Yeah, but there are no famous girls for me to have sex with.”

Okay, well, except that one girl…

“Rachel Leigh Cooke? She lives in LA though… I’d have a better shot with her there.”

Umm, Jessica Lange… she has a house in Stillwater…

Plans… “Yeah, the album comes out here on March 17th. And the next single, “EZ Pass” comes out in May, and the new video for that and a bunch of remixes and stuff. And I’ll be touring in the beginning of May with Hot Hot Heat all over the UK and doing this tour all over the US with Kelly Osbourne for 5 weeks right before the Hot Hot Heat dates. I’m playing at SXSW with the Sugarhill Gang, which is gonna be awesome, then I’ll probably live here all summer and be at the festivals hanging out playing and yeah, I don’t know, just kinda work it over here. I’ve already worked it in the US.”

the album “You Can Feel Me” is out on b-unique records March 17th.