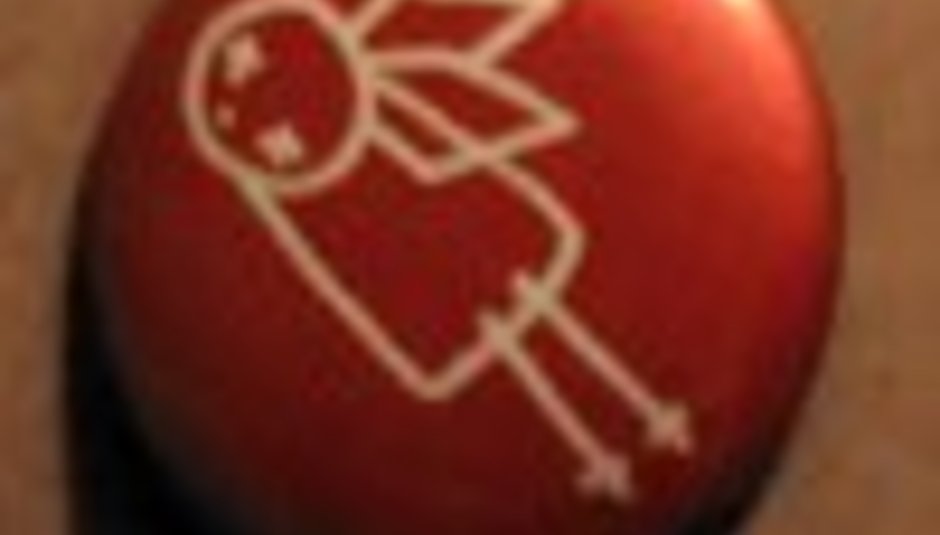 by Sara Lovejoy December 20th, 2002
Sara Lovejoy @ Barfly London.
MEW enter the miniscule stage of the Camden Barfly to applause and the pre-requisite heckles. A young man, his guitar slung across his chest, strap obscuring a well worn Pixies t-shirt, makes a request for the lights to be turned off..
‘Am I wry? No’ the band's last release, before their more timely single, She Came Home for Christmas, kicks in and signals the start of something gorgeous..
The darkened room gives way to a kaleidoscope of mad, fairy tale, dreamscape images projected onto a screen at the back of the stage. Mew are immersed in pictures of lost highways with freakish Victorian dolls coasting down them in old American cars. Volcanoes erupt before our eyes. Stars shoot by and a barrage of stick angels float around, flying across the band as they lose themselves in their equally obscure pop sounds..
Jonas’ vocals pitch sky high (really high) and finally land piercing our skin like blunt, hot, butter knives. My legs start to shudder, as I stand too close to the speakers, Dis badges gripped firmly in my little paws, waiting to make a small mark on Mew, which looks like a small blemish compared to the huge dent they’ve made on my eyes and ears.
I think I’ve found my new favourite band, and there’s not a ‘Jagger Swagger’ insight.

Sean Adams @ Barfly, London.
Image is Nothing? No. This band thrive on it, they're riddled with it and they inspire it. This band are it, yah hear? Are they leather wearing trendies? No.
Right from the off, with single 'Am I Wry? No' I listen and lissen good, imagining I'm sat cross-legged and that my wine's really ribena. For some reason, I feel like I'm in the middle of a game of pong. On one side are the Flaming Lips. On t'other, swooping up and down fighting to keep the ball spinning, is a smitten-six-year-old who got bored of street fighting men, waiting to pluck up the courage to speak to his playground sweetheart. Just killing time? Perhaps. The idea of pop is the blocky digital ball bouncing diagonally left to right. What is pop? Like, why is it that if you're a bit quirky for an "alternative" band, then immediately you're pop? Why is most pop music SO terrible? Why gawd-dammit??
Thoughts spin and spin.
But there isn't any sense, only signs.
There's the bassist in his faded "this monkey's gone to heaven" Pixies tee - summing up the somewhere this band came from. It's that lost realm, back in a time when you could be good and good alone and actually get somewhere and it'd not matter that you're fat and stubbley and singin' outta key (Mew's frontman is more of an angelic model with a universe-roof polishing high voice than Frank Black, to be honest!). People got away with writing music that changed the world, back then. Madly, and best of all back in the day, whoever signed a great band, really believed, they saw it through til people agreed. Mass hysterica followed. This is a land time forgot. And blimey, you wouldn't believe it, but the media was run by opinionated hacks who love music! Imagine that kidz.
Then there's more signs amongst this.. this, whizzing Velvet Undergroundy visuals, projected onto the band, their silhouettes lined up on the back wall amongst 3D horizons, big-eyed kittens, cheeky rabbits, cartoon foxes with their bushy tails, old-womens wrinkley nipples, volcanoes, the elements, fallen angels with tales to tell if only they could and flames and snow and the moon and the stars. It's all there. And more. The whole world put into surreal digital, in sync with their soaring, smiling, sweet-sweet music, complete with ice-etched, jagged dew-shining teeny rainbow edges. Rainbows refracting of the world and all its light all wrapped up and ready for things to change back and this.. this, music, pouring starscapes all over the squished up, sold out, got-in-there-first assembled, who've had an hour or so of evidence that life still exists. They've had everything they ever wanted, rummaged together and been taken from this room to a different place. And different is always good. And it's good to go places too, places anew, places of-old, great places, places where Mew are playing!
P.S. Plus they’re Scandinavian, which always helps, especially if you're a lo-fi pop combo such as this.

Rebeckah Pearce @ Barfly London
I didn’t realise that Mew were this popular and neither it would seem did Mew frontman, Jonas Bjerre, as he asks the crowded sweaty room: ‘So how many of you actually bought tickets?’
Bringing with them their dark faery tale magic, Mew kick off with their previous single ‘Am I Wry? No’ and the crowd nod their heads in approval. Amazing imagery is thrown at our faces; stick angels, broken Victorian dolls, incredible patterns swoop across the band as they play. It gives you a sense of other worldly beings and reminds you of something you can’t quite put your finger on.
Yet, with all these fantastical things going on it doesn’t detract from the band themselves, in fact, it serves to enhance their performance. Singer Jonas lends each song his unbelievably high vocals that never once waver or break and all this delivered with the face of an angel. Jonas is gobsmackingly beautiful and will definitely appeal to young, tortured female poets the world over.
‘156’ is a majestic song that soars over our heads and defies you to not like this band. Current single ‘She came home for Christmas’ is moody, ethereal and utterly magical and it seems as though the audience are holding their breath oblivious to the fact that they are in a dingy beer soaked bar.
Mew will never become super famous and I don’t think that is their aim. Tonight, they have opened up a mysterious and dark world and everyone seems satisfied that this band have lived up to their expectations and more. For half an hour the crowd have been airlifted from Camden to a beautiful and strange land and this is what I think Mew have intended to do. Call it Lo-Fi, call it pretentious but in my eyes it beats "new" Radiohead into a dirty and dusty corner.