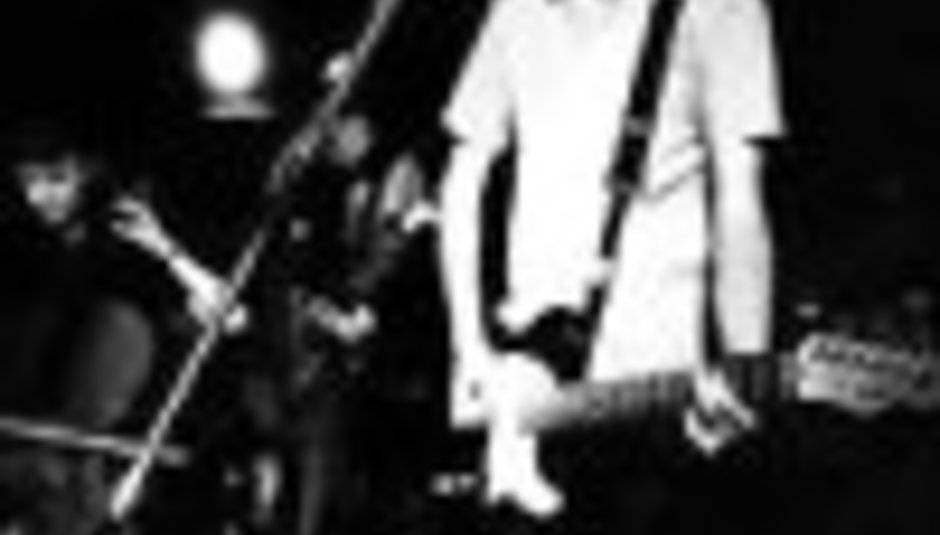 by Sean Adams December 9th, 2002
This is the first of many tour diaries from the best bands in the UK right now, strange stories, tales of debauchery, drunkeness and wot not...

This is Dan Reeve's Diary, from Exeter's amazing rawk with a cello that is Tyler ..think Aereogramme, Fugazi, early iDLEWiLD, Six by Seven's raw bits.. stuff like that! Check out an MP3 of 'Liar'. And check out the dates to see if you can catch this tour near you here.

Day one- 25/11/02
We start off the day doing all the normal horrible stuff which kicks off a tour. Picking up the van at a ridiculous time in the morning, last minute packing and then trying to find a way of fitting all our stuff into our little van. Once again we have gone for the option of a van with only three seats. There are five of us. We pile all the stuff in and Chris and Craig jump in the back in what we will come to lovingly call 'the cell'. This thing has no windows, most probably no air and when we are feeling mean in the front... no light!
Myself and Hannah share driving duties and we get to Newcastle in time to sound check. Loading in is a bit of a bitch as we have to carry our stuff through a break dancing class (!?) and then up a lift to the venue. We get told off by a security guard for using the lift and then i have to use the service lift which is kinda like a thin skip that carries us up to the correct floor. Okay, enough bitching, on with the rock!
We say hello to the Hell Is For Heroes boys and introduce ourselves to Reuben, everyone is super nice. Sound check goes well and before we know it we are ready to go on. The place is totally rammed and this is pretty weird for us as we're used to playing to half empty venues! The set went well and we sold a shit load of stuff and generally got treated like minor celebrities by all the kids which was pretty amusing. Reuben and HIFH both pulled it out the bag that night so all in all it was a great evening of RAWK.
That night we decide to go to Anna's (our stand in bassist from Exeter's HeadsOnSticks) grandparent's house which is in Saltburn by the sea. We get lost and it takes us about two and a half hours which sucks as we're pretty tired. Chris and Craig stay at her uncle's house. Hannah, Anna and myself stay at her grandparents. Nice.

Day two- 26/11/02
We spend the morning in Saltburn, when we meet up with Craig and Chris, Craig amuses us with this little story. He wakes up and wanders into Saltburn, he doesn't know where he is so he starts asking random people "Where am I?", "Is this York?" This place is a small town so everyone thinks he is some kind of loon who has wandered into town. He then gets further confused/excited by the fact he is by the sea. The cell does that to you...
After saying goodbyes to Anna's folks we head off to York. We get there in time to have a little look around and it's generally a really pretty place. The town centre is within an old city wall and loads of the streets are still cobbled. It seems like a nice place (despite the fact Hannah almost got spat on!) and having done our tourist bit head back to the venue. The people at Fibbers are very cool, making us tea and food. The show goes well and the place is rammed. That night, Hannah and I have the joy of staying at some computer geeks' house whilst Anna, Craig and Chris go out on the piss with the HIFH boys. The dirty stop outs.

Day three- 27/11/02
We wake up at the pretty damn grim house and make our way into town. We meet up with Chris, Craig and Anna and they are all suffering!!! Ha ha! See kids, booze doesn't pay. We wonder around York for a bit then set off for Liverpool.
When we get to Liverpool we go to the wrong uni, hmmm not good. We finally arrive at the correct uni, Pippa from the Cavern in Exeter joins us and it's cool to see her. She generally looks after us, does our merch and makes sure we get paid! Nice. Me and Chris indulge in some skateboarding in one of the empty uni corridors which is fun, the place was massive, it reminded us of something out of 'Nightmare on Elm Street' with bare walls and long dim corridors.
Liverpool was weird for us, the crowd were unresponsive. Not that any of the bands had an amazing show! Jamie from Reuben kept getting shocked by his mic all the way through their set, he was pretty messed up by the end of it and was understandibley shocked (excuse the pun) by the whole experience. HIFH rocked the house but even they said the crowd were a little subdued. Another thing that sucked was HIFH having their van broken into, we don't think the thieves got much but it capped off a slightly strange evening. That night we stayed at a big travel lodge and sneaked all six of us into one room.

Day four- 28/11/02
We looked round Liverpool for a while which is really pretty in parts, we got quite obsesive about taking photos of the radio tower and had breakfast in a cafe inhabitted by grannies. A good start to the day all in all.
Our show was in Merthr Tydfil that day so we headed off on our journey in to Wales. Sign posts (or the lack of) caused us problems finding our way but we found our way in time for sound check which is always a bonus. There were problems with the PA, it was just a vocal one and apparentley there had been 'words' exchanged earlier between Matt the tour manager and the promoter ending up with the promoter crying! This aside the show went ahead as planned and a good time was had by all. We pulled out some rock moves, there was hella strobe light action and in HIFH set Justin dived OVER the drum kit narrowley avoiding death!
It was a good night, even though some of the Lost Prophets were there (only kidding!). That night we drove back to Exeter, a lovely day off followed for all of us, bar Hannah, who had to work (she IS punk rock).

Tour Diary to Be Continued...