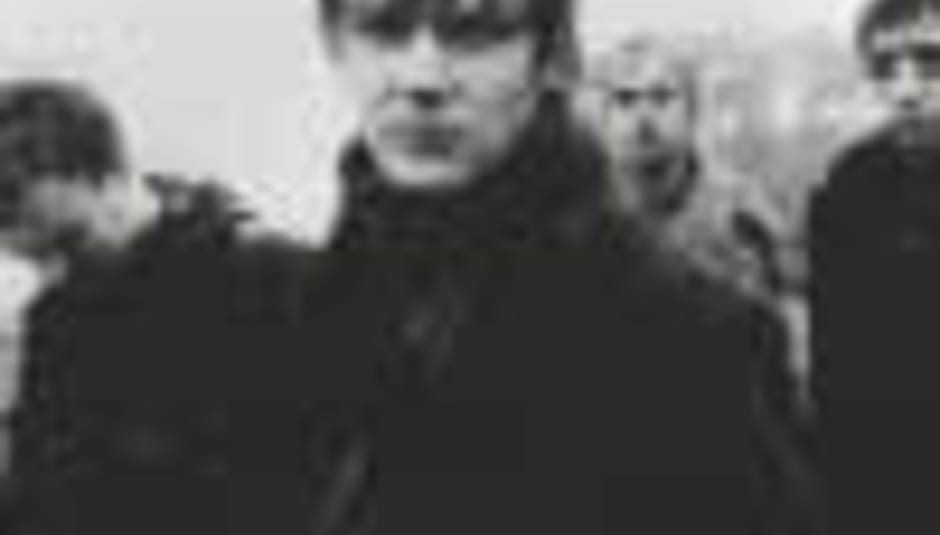 However, scrape away the surface layer, and then the next few, and you will get to some 10 to 12 ct gold bands. Okay, okay, I'm being cynical, but if you take a look at the Reading/Leeds line-up, you realise that that fucker's on fire. I mean, you could spend all three days away from the main stage (give or take =w=, The Strokes and White Stripes on one day) and not give a flaming one.

Whereas at V2002, every act is signed to a major label, everyone has been pushed by the Evening Session, Virgin Radio or HMV. It's a different kind of festival for a different kind of people. You know who they are: Nelly Furtado-buying Evisu-wearing, Waitrose-shopping people of insubstantiality. And me. Because ultimately a weekend in a field watching bands is a pretty cool thing to do regardless. My name is Gareth, I listen to Radio 2 and this is my story…

I will be in Chelmsford for the V-festival this year, meaning that my Saturday will be different from the Saturday if you were in Staffordshire.

Starting from the top down, it's a Saturday night fight out between The Chemical Bros. And Badly Drawn Boy, The Chems appear to be on the wane at the moment, but that don't mean their last album didn't contain some Mum-ra (this means good) moments, and like their fellow stadium-bleep brethen Orbital, they can still hammer out a ferocious live show. BDB is a lovely fella touched by the genius of genius songwriting. Potentially he could play for an hour and it would be solid pure MOR gold. But you know its not going to be. The man's too much in love with, well I don't know what, The Show? Stupidity? The Reality That Its All A Bit Mad? to resist poncing about on stage and creating horrendous 'jams'. BDB may have the bumbling tuneful loveliness, but the Chems have the essex-boys-off-their-tits-in-a-park thing going on. The wise amongst you will have noticed that I've completely ignored the claims of The Mediocre Street Pie Eaters. Correctly.

What else is on that day? Well on the main stage it's a case of walking very quickly past Alan Morrrrissssetttte, Nickelback and Elvis Costello (old, wrinkly, angry, irrelevant), and perhaps sniffing out Sigur Ros and The Beta Band on the other stage.

The Beta Band are mad. This is not a bad thing, as they tend to utilise their insanity to good ends. Live, the previously shambolic lo-fi-loser-kings picked it all up around 2 years ago and played a seminal set at Glastonbury. I've seen the three times since then, and they've not let their standards drop. Sigur Ros are great, like a Nordic Led Zepplin (the sonic excess and medieval weirdness) crossed with Godspeed! (who they sound like) and Bjork (bleepy voice weirdity). Whilst listening to Radiohead. Obviously.

Unsurprisingly, Halo have has some time purchased for them on the bill. Not that I'm going to see them, I'm just cynically pointing that out. Athlete look promising. Of the Deptford crew, people keep saying Super Furry Animals and Beach Boys to me. This makes me happy. And David Holmes in the Dance Arena. God, even the rest of the acts in the dance arena all appeared to have re-mixed a Ministry compilation album in the last 6 months. Groan.

Sunday's better. Much better. Starting from the bottom up, The Crescent are meant to be part of the burgeoning scouse scene, but like the Ocean Colour Scene of the group. So I might miss that. Royksopp and Seafood look like they're having a head to head on the stages, so its probable I will be seeing a bit of each set and feeling that I should have bothered with one or the other. Royksopp might edge out Seafood though, cos I hear there will be coffee tables at their performance. So we can put our U.N.K.L.E CD's on them. Or our unfeasibly big trainers.

The Coral will get a second inspection, they were on far too early at Glastonbury this year, and now, their album has been nominated for a Mercury Music Award. Which makes them more important. Expect people in their early 30's (all wearing newly purchased Reni Hats) to mutter things like "weird, they have tunes, but they keep messing them up with odd bits".

Then, sit down, pipes in, lighters out, its time for the day's quality triple header on the other stage. Elbow, Idlewild and Doves. Elbow are quite simply wonderful, their debut album was a long time coming but took infinitely less time to be recognised as a brilliantly raw album. I mean Guy Garvey, the man's a poet. Have you ever listened to the lyrics on 'Scattered Black and Whites'? No? Do. The album is utterly fearless, and very brave. The lyrics seep blood, sweat and tears in no less dramatic fashion than open wounds on a badly beaten man would. This is their last gig before they go away to try and top their first effort (or themselves) so its should be quite a last hurrah.

Idlewild. Don't like seeing them play this festival, but it seems their most likely route to ruling the world. Not sure if I want to see them do that, but the new album is a slow burner and a grower. In the right conditions and the right frame of mind (both the bands and the audience), this could be a massive, massive gig for the 'Wild.

Doves. They are great. They are like the new Stone Roses mixed with the new New Order. Which is cool. Even if they are not. Which is fine. I'm torn though, I might have to sacrifice some of their set to see Primal Scream. What the hell are they doing at a V Festival? I don't know, but if their live set matches the fury, passion and extreme guttural stomach-wrenching qualities of their live ventures two years ago, I may even forgive them for chucking out a so-so album.

Then it's a choice between Basement Jaxx, Groove Armada and Stereophonics. Or perhaps an early train home.

Or maybe I could do the alternate bill

Which would involve seeing Manics, Alanis Morissette, Nickelback, Paul Heaton My Vitriol, The Burn on Saturday

Urgh. It's a game of four halves, Brian.