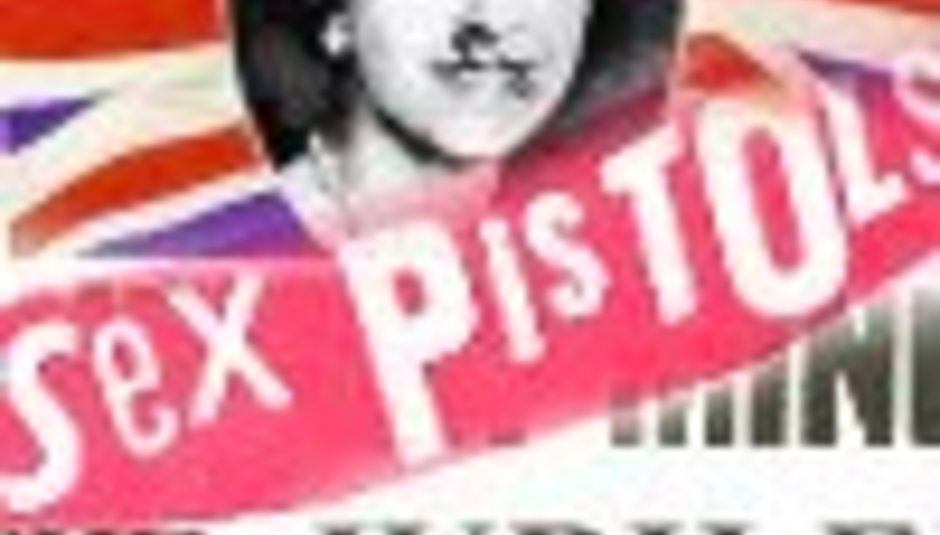 by Sean Adams July 30th, 2002
It’s the SeX PiSToLS Jubilee, just like the Queen's one but for the people who can’t afford towers of cake, champers or to live outside of relative poverty. 25years ago the Sex Pistols were living in squalor, with barely enough cash to eat but the brains to get by. Most importantly they had the empowering vision to see: enough is enough, we want to see things happen. So, sick of the world around them, the state, the mediocrity of the people and the popscene - apart from Bowie, Roxy and some American stuff – their mission was see change/change! I wasn't even born.

It’s a beautiful summer’s day, proper skin cancer weather. Crystal Palace Sports Centre is buzzing with excitement, smiles and the fuzz of support bands. I missed the first couple but got there in time to see The Dropkick Murphy’s who play old-school punk, with bagpipes and very little in the way of hooks, lyrics you can hear yet some change-the-world venom is hanging around. That passion comes as standard. And stylistically, it’s the rage that’s all that matters. Right? I’d like to think so. The rows of scruffy haired, tartan trousered, ’77 torn-shirted look, take your picture with one of them... they all bounce up and down, lapping up this Epitaph-flavoured irish-punk. It’s just not my bag, to be honest.

Onwards for the proper support act... Lydon was quoted as saying he wanted to have people who were living and breathing the dream NOW, as the support acts. What better band to choose (wonder if it was done personally?) than …And You Will Know Us By the Trail of Dead! The name alone stands out from the flock. They walk onstage, mockingly-apologise for taking up our time and begin their war. Because, sadly, the second they start, these anorakists (who later jump around to Pistols b-sides) begin to hiss, boo and throw beer at the band. Fuckerz. Punk, I believe at least, is about being open-minded, thinking for yourself, not being a sheep and living in the moment, right?

If only these uniform wearing, £32.50 paying ‘punks’ had given the Trail o’Dead a chance. Had they listened and realised that THIS IS NOW, this is one of THE most exciting, and down right emotionally-charged catharsis experiences - and I mean experience, forget that they’re just a band - that these people (who probably, like me, never saw the pistols at their peak!) are ever likely to witness. And maybe it’s because, shock-horror, they can play their instruments. And maybe it’s because they’re not bothered if it’s verse, chorus, verse. And maybe this is more the Sonic Youth take on punk than the Ramones but just fucking maaaay-beeee, this progression is both in keeping with the ideals of punk rock and crawling with the leeches that punk let loose into the heads of my parents g-g-generation!

Now, as I’m too much of a hypocrite to be straight-edged, I think I want a drink. And what better place than the only bar here (well, it is a sports ground I guess!), a bar ran by today’s sponsors. Guess how much a pint of lager was? £1.50? Hahaha. £2? No, no. £2.50? I wish. THREE-stinking-queens-heads-on-golden-coins!!! Not only are there no other options, but there’s also a cigarette machine to feed other various lung-destroying, money-for-addiction type corporations. Did I miss something, somewhere? I knew the media and the education system was bad enough, but for me to totally miss the point of something that was so life-changing for so many people, apparently, how on earth could I be so wrong?

Anyway, the suns burning itself into the ground, in alsorts of Turkish delight-like colours and some speed-garage, with mc’s, are sent to test us. I’m not racist, I just don’t like Garage music. I dread to think how many pounds worth of beer is thrown at them but eventually they leave, the lights go down and THEY take to the stage.

If you hadn’t been reading until now or were as confused as me and 30% of the paying through-the-nose for an experience punters, then onstage now are Sex Pistols. Like I said at the start, they wanted to do something legendary and they made it into the history books and created a helluva lot of drink’n’drug-addled inspiring chaos. Or maybe not as inspiring as I once thought. The boxset with 3cds of the best moments is really amazing, I put it on and instantly began to falter at the thought of nothing that exciting happening in my lifetime.

We get what is to be expected, oh-so pretty much all the songs they’re famous for. They look like performers but visually a bit like Dire Straits from my don’t-throw-beer-on-me distance but with the obvious added frontman pulling all the poses you’d expect. There were a lot of b-sides, which I didn’t know but they were lapped up. ‘I Wanna be Me’ (or was it ‘Submission’, I don’t really remember) was dedicated to camp-cult-icon Graham Norton.

They go off! “You know the protocol” and come back on again to ‘My Way’ which has the putrid, 25 more years of decay, stench of irony! I’d had enough. This was never going to live up to what it coulda, shoulda or woulda been. I don’t think I can stomach watching the guys in football shirts, n*k*s and union jack shorts dancing along, missing the point completely. I decide to leave.

Well, I’m sorry I didn’t wait so I could tell you all about the balloons but sometimes people make me sick!! Walking away, past dodgy merch sellers, dropped lager cans, half-eaten sprinklings of heart attack food; my heart is totally void – and not even in a vacant nihilistic way. I truly wish I wasn’t naive enough to believe that today was something more than a reunion show, a cashing in for the Pistols. I know people = shit, all the signs are around just like they were in ’77. But I wanted the magic of the revolution, the idea, the simple notion that one day things could get better; that is something I truly hold to my chest. We can’t just keep on, keeping on... can we?