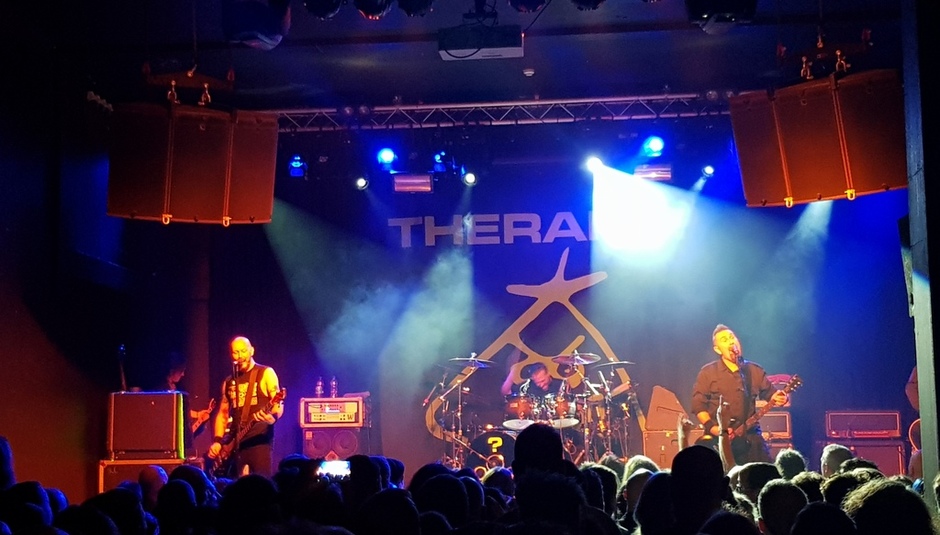 It may have gone unnoticed to some but Therapy? released their fifteenth album Cleave earlier this year. While it would be churlish to suggest the band ever lost any of the desire and enthusiasm which went some way towards making them one of the most successful rock bands of the 1990s, Cleave undoubtedly heralded a marked return to form. An energetic and at times brutal record, it harks back to their halcyon era, not to mention reuniting them with esteemed producer Chris Sheldon, who also worked on two of Cleave's most critically acclaimed predecessors: 1994's Troublegum and the band's sixth, Semi-Detached, which came out four years later.

While their commercial peak may have happened two decades ago - the aforementioned Troublegum went onto sell over a million albums with the band regular fixtures on Radio One and Top Of The Pops between 1993 and 1995 - they've retained a dedicated hardcore fanbase when it comes to playing live, and even though tonight's show in the Rescue Rooms is a downsize compared to their previous Nottingham visits when they've graced Rock City, the atmosphere isn't any less diminished.

Indeed, Therapy? have enjoyed a long and productive relationship with the East Midlands. Not least by way of Derby-born drummer Neil Cooper, who despite not joining until 2002 is now the longest-serving drummer to have played with the band. So when singer and guitarist Andy Cairns - one of the two remaining founder members - dedicates 'Potato Junkie' to the long departed Hearty Goodfellow venue where Therapy? played their first ever show in the city, the sentimental bond between band and audience is evident for all to see. Therapy?'s last performance in this part of the world at May's Bearded Theory festival proved something of a revelation.

If that was a timely reminder why Therapy? have remained so vital and relevant, this evening's show pretty much cements that. They open with recent single 'Wreck It Like Beckett' and 'Kakistocracy' from the new record, both instantaneous crowd pleasers, before 'Die Laughing' takes us back to 1994. Its refrain of "I think I've gone insane, I can't remember my own name" is riotously sung back at the stage by a lively and eagerly participant crowd out front, and from thereon in, the setlist takes shape, new material and more familiar older numbers following one another for the majority of the show.

What's most noticeable is how songs from Cleave fit comfortably with the songs from their back catalogue they choose to play. Even though some are now over a quarter of a century old, nothing sounds tired or out of place. 'Trigger Inside', probably the only song to namecheck serial killer Jeffrey Dahmer and reach the top 30 of the singles chart, segues perfectly into this year's 'I Stand Alone'. Likewise non-album single 'Opal Mantra', which reached the top 20 a year earlier, could quite easily sit beside 'Save Me From The Ordinary' on their latest album as it does in the set this evening, while another former single from back in the day, 'Turn', nestles congenially between a frantic 'Expelled' and thought-provoking 'Callow'.

Although Cairns is an obvious focal point, bass player Michael McKeegan remains the most animated of the three throughout, constantly buoying the crowd while fluctuating between left and centre of the stage. Early single 'Teethgrinder' takes us back to a time when rock and shuffling hip-hop inspired beats scarcely interacted, before 'Stop It You're Killing Me', another of the nine songs aired off the mighty Troublegum tonight, brings the first set to a climactic end.

Returning for an eight-song (nine if you include the two-thirds of Judas Priest's 'Breaking The Law' they play before slipping seamlessly into 'Nowhere') encore many lesser bands would call a set in itself, their relentless passion and drive a joy for all to witness. Perhaps the only surprise is that nothing features from any of their previous eight albums including 1999's excellent Suicide Pact - You First. But then with such a strong body of work to choose from, there's always going to be something that misses out. Nevertheless, Therapy?'s confidence in their latest record becomes none more evident when explosive closer 'Success? Success Is Survival' brings down the curtain on an incendiary performance.

Next year, Therapy? turn thirty, and you can bet your bottom dollar those celebrations will last well into 2019.