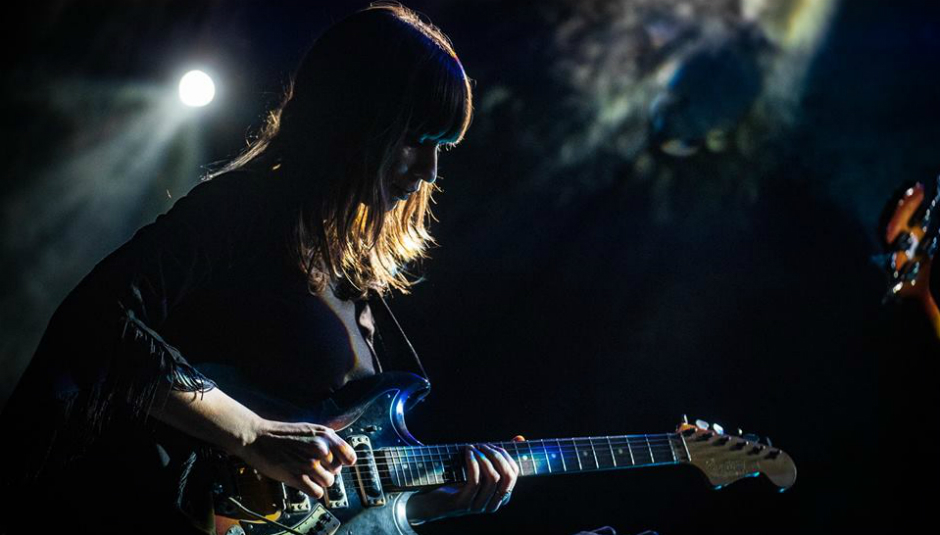 With their latest full-length effort Magnifique, Juniore have created a universal aural language from the pop history of their French homeland. Their self-coined ‘yéyé noir’ sound merges the classic stylings of 60s French pop, from Francoise Hardy to Serge Gainsbourg, surf-rock and retro-futurism, with post-punk rhythms and the quirky humour of the country’s new wave scene.

Formed in 2013 around the Parisian scene that also gave us La Femme, Juniore is the fleshing out of band founder, and central figure, Anna Jean’s bedroom-penned songs, the personal made into something much more expansive. A girl-gang of sorts, despite being anchored by Samy Osta’s production (sprinkling his “magic and craziness” over the bare bones), the band is intended as a ‘sisterhood’ and a vessel for talented women to “write music, connect, and share it with the world”, a formula that is yielding the most interesting results the world over.

Their genesis, like many bands, is much more commonplace, a story of outcasts connecting over music.

“Samy [Osta] (who records our music) and I met in secondary school. We’d spend hours listening to music together and sharing absurd philosophical theories. One day, I asked him to show me how to play ‘Blackbird’ on the guitar - and years and years later, I asked if he’d like to produce and record Juniore. And with Swanny (the greatest drummer), we have a very modern romance. We met through Facebook and mutual friends. All the girls who have played in Juniore are friends or friends of friends. They come and go with life changes. And because Swanny, Samy, and I are adolescents attardés (politically incorrect French expression that best translates as “retarded adolescents”) we’re still here,” explains Anna-Jean.

With early hype in their homeland, the band made good on their promise in the form of the Marabout EP in 2015 and their debut album Ouh là là last year. But this excellent output was only marginally making a dent outside of France. In stepped new British label Outré Disque, who collected the best of their career to date and combined it with stunning new track ‘Magnifique’, for a new album of the same name and their first UK targeted release.

It’s easy to see what attracted the label. Juniore are one of those strange bands where their influences are so obvious, yet they never quite sit right, like Stereolab’s work. Is the mining of the past a conscious decision, or a kind of aural osmosis?

“Yes! It’s really what Samy wanted to make – an album full of recognisable references, adding something new to the production. To avoid making a copy of a copy of a copy. Do I feel it forces lazy comparisons? Sometimes, but I always take it as a compliment.”

Despite its fervent Frenchness, sung all in French, the album gained regular airplay on BBC 6Music and press praise. Although it doesn’t happen always, there is still a power to French pop that allows it to break down cultural and language barriers, suggests Anna Jean.

“I would say maybe two things [make this happen]. First, that the classic French pop songs were the first pop songs, perfect gems! That it changed the way people made music, the way people listened to music too (for better and for worse). And, second, because the French were copying the greatest British classic pop songs.”

Even if the listener doesn’t speak the language it is a language that sounds right and paints pictures. She continues to talk about the language’s unique relationship with music.

“I suppose it’s different whether you do or don’t understand French. I like the roughness of certain syllables, it gives something rhythmic to lyrics that might be quite unique. I also really enjoy French idioms, so full of images.”

Perhaps it is this ability to evoke imagery that has started to connect internationally? A fact that is more than welcomed by Anna Jean, who is buoyant about the recent attention in the UK and further afield.

“It feels wonderful. It’s really so unexpected and gratifying. Especially because we’re so fond of English culture. And especially now. The lovely Graeme at Outré Disque, who decided to release our album in the UK, said once it was the greatest response we, France and England, could have to Brexit.”

Aural unity in a time of deepening division across our continent is nice hyperbole, but from a French standpoint looking in, does Brexit look that bad?

“It’s very hard to say – of course, we’re worried about what happens next. For younger generations who might not have the chance to study abroad as easily as we could and for everyone who felt the way we do, like our European countries are sisters. We fight and make nasty comments about each other because we’re familiar and different. But I’m too desperately hopeful to imagine that things could really change for the worse. Hope for the best, it’s as much as we’re able to do.”

“There’s the same kind of tension here in France, as sadly everywhere. It affects the way we do things, because it seems even more important now to not make unnecessary compromises. To be grateful. To make the best of it. And share,” says Anna Jean.

And there’s something about the music of Juniore that suggests it is trying to impart something profound about the world and our current times, but it also feels like it could be abstract. For Anna Jean her lyrics, and themes, are both.

“ I like the way a lot of horror films talk about something very real, wrapped inside complete nonsense. The way zombie films are a metaphor for war. I think that’s how our lyrics work too. It’s serious wrapped in ludicrous.”

The mention of ‘horror movies’ leads to the question of what kind of movie Juniore would soundtrack? “Some people tell us they like to listen to our music while they’re driving - maybe it would have to be a film about roads.”

This idea fits. There is a returning commonality to bands that think, not just in terms of sound, but in aesthetics, in the visual, to create a complete artistic persona and Juniore fall directly into that camp. They have created a world where their videos, graphics, and photography all complement each other and are as part of their fabric as the music.

“It’s so nice to create your own universe, full of all your favourite things mixed together. I think Juniore is the best excuse I’ve ever had to do all the things I love doing – drawing and playing music and making videos,” explains Anna Jean.

“We’ve worked with the same lovely and talented photographer/filmmaker since we started the band, Julia Grandperret. We talk about ideas and things we love and throw it all in, as best we can.”

Perfectly democratic, Juniore is personal art completed through collaboration and sharing, an almost perfect way to create. Until recently, the fruits of this labour of love would have been largely lost on UK audiences, but following the UK album release and a handful of gigs, the band are heading to our shores in November for an extensive tour, to change this fact once and for all.

Reports of their recent live shows suggest audiences will not be left disappointed. Having been recently chosen to support Miles Kanes on a European tour and just announced as joining The Dandy Warhols on their 25th-anniversary stint, they are certainly getting big endorsements where it counts.

Like the experience of many visiting bands, their experience of British audiences – so far – has been overwhelming in its enthusiasm.

“It’s very different to play for an audience that speaks another language. I think maybe people understand our music with more finesse, ironically. Maybe because it becomes about feelings and energy, more so than lyrics and language. I’m not sure. It’s also different in every UK city we’ve played so far. Bristol was incredible. Brighton was mad. And London hit us like a heatwave.”

With a stunning album, big support slots and a forthcoming stint on these shores this should be the time that Juniore becomes the next Franco-pop act to win over the UK. As our time comes to an end, Anna Jean ends with a tour anecdote.

“Might not be the strangest, but it was quite funny. We were playing in a small village in France for a festival last winter, and the weather was so bad, all the other bands had cancelled. For some reason, we were the only ones who made it to the festival. The audience was exclusively made out of little old ladies and their dancing partners. At the end of our show, one of the dancing men came up to us and said, “J’adore le rock'n'roll”.

And with rock’n’roll coming from Juniore, there is much to love.

Magnifique is out now via Outré Disque. For more information about Juniore, including forthcoming UK tour dates, please visit their Facebook page and their Bandcamp.

The Fangasm: Kid A by Radiohead

"The act of addressing darkness is in...