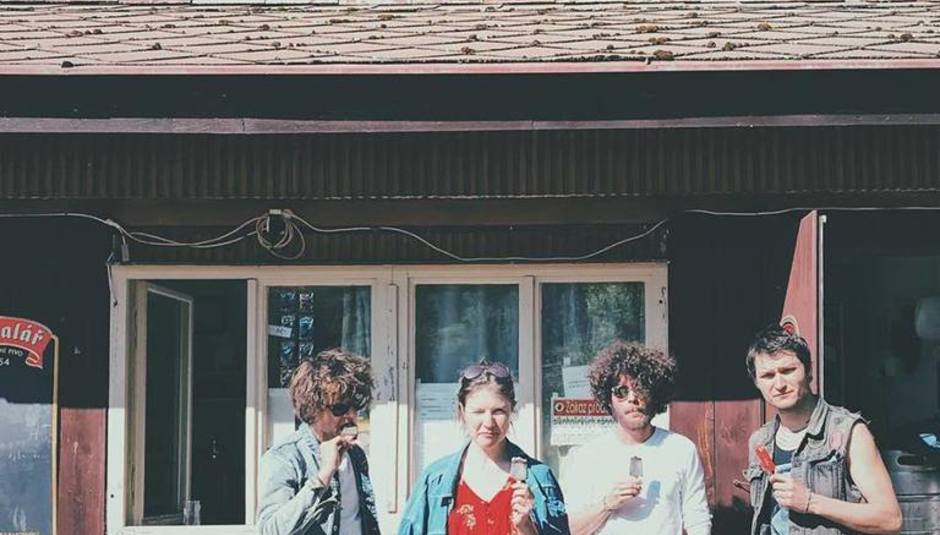 Despite forming eight years ago, Manon Meurt are one of Drowned In Sound's finest discoveries of 2018. Hailing from the small town of Rakovnik to the west of Prague, the four-piece - Kateřina Elznicová (vocals & guitar), Vojtěch Pejša (guitar & vocals), Dave Tichý (keyboards) and Jiří Bendl (drums) - play an exquisite blend of ambient, reverb-drenched dream pop that wouldn't sound out of place on 4AD, Bella Union or Creation Records back in the day.

Their self-titled debut EP came out on Canadian independent Obscura back in 2014, and having undertaken a couple of line up changes along the way, will finally release their first long player MMXVIII in just a few days, which you can listen to exclusively below. With a European tour also in the pipeline, the next few months look set to be busy for the Czech quartet.

DiS caught up with the band after their blistering performance at Bratislava's SHARPE festival earlier this year.

DiS: How did Manon Meurt start?

Vojtěch Pejša: It all started with Kateřina (Elznicová). She played guitar and I liked her voice so we started playing together.

Kateřina Elznicová: That would be about eight years ago when I was 16. 2010.

VP: Then Jiří (Bendl) joined us on drums and we got a bass player. Now Dave (Tichý) has joined on keys.

Dave Tichý: Tonight was my third show with the band.

You've had a recent lineup change on bass, which no longer features in the band set up. What preempted that?

VP: It wasn't really a big deal. We needed someone to play some bass heavy frequencies and our previous bassist left, so we chose Dave because we knew him from a different project and saw what other elements he could bring to the band.

Manon Meurt have a sound that's unashamedly influenced by bands from the UK yet are still relatively unknown outside of the Czech Republic. Why do you think that is?

VP: I think a lot of it is because they only focus on themselves. On Western culture and Western bands. Nobody cares about Eastern European bands in the UK. I don't know why that is. I guess because they've been pioneers in so many different music genres they don't feel the need to care about other stuff. I don't know, but if that's the case then it's understandable.

But the same token I wouldn't call Manon Meurt copyists as you're bringing a lot of new elements to the shoegaze, dream pop and psych rock genres.

VP: You think so? We're heavily inspired by many bands but ultimately want to sound like ourselves.

With the exception of The Ecstasy Of Saint Theresa from the early 1990s, Manon Meurt are quite pioneering in terms of introducing shoegaze to Eastern Europe. How did you first become aware of that style of music?

VP: Thanks! We don't really feel like pioneers. There are many shoegaze and post-rock bands around Eastern Europe so we're always to do something a bit different. I'm heavily inspired by a lot of shoegaze bands but we all like lots of other stuff too. For example, the others like Deftones and Rush too.

Jiří Bendl: When we make something together we don't really think about how it should sound. We just play together and if we like it, take it from there. I guess we're in the playground of shoegaze and post-rock but we like to think outside of the box too.

VP: I don't think there's much of a scene in the Czech Republic for what we do. A lot of bands love shoegaze from the early nineties but there aren't many that actually play it.

JB: A lot of it is mixed in with the hardcore punk scene.

Your shows at Eurosonic Noorderslag, MENT, and SHARPE festivals attracted large audiences made up of delegates from all over Europe. Do you see yourselves playing more shows outside of the Czech Republic as a result?

VP: We played some shows in the UK last year. I really enjoyed that.

JB: I think our ambitions are to record and tour, although not necessarily in that order!

VP: Hopefully a European tour, or maybe somewhere else.

How do the songs come together? Do write the music first and build the lyrics around it or vice versa?

KE: The music comes first, then I write the lyrics. Most of the time anyway.

What are the songs about?

KE: Mostly they're about real life situations I've been through, or about people I've met. Sometimes they're about love and other emotions.

KE: When you're stuck in a moment of something and the feeling you get from that.

Kateřina sings the majority of Manon Meurt's songs in her native tongue. How do you feel about Eastern European bands that choose to sing in English instead?

VP: It depends because I think it's much harder to write good, meaningful lyrics in our language.

KE: We've all been listening to English music since childhood so I guess people do what they know best.

VP: Or else you can easily fall into a trap. We're really strict about how we write. So even though we write in Czech first, we're more strict about how it translates than we would be if we wrote it in English. I think that's similar to a lot of bands in the Czech Republic except to them, English is more of a musical language.

Has the political situation in the Czech Republic influenced your songwriting in any way?

VP: We're aware of what is happening in the Czech Republic and the rest of the world but we don't write songs about it.

Do you see music as an escape from what's happening socially and politically?

VP: I do. I've never seen a shoegazer wearing an American flag!

Your debut EP came out in 2014 yet the album isn't out until October of this year? Why the long gap between records?

VP: Too many new people in the band! That's actually the main reason it's taken so long. We were planning to record something a while ago but then our first bass player decided to leave the band. Then we got offered a bunch of shows in between times so had to rehearse the new songs and it's been a long process getting to the recording stage this year.

So have Manon Meurt finally acquired their perfect line up?

VP: You never know! I hope so. I do enjoy bass guitar but I think this will work too. This is something new for us but we're still searching for our sound.

What advice would you give to a new band just starting out?

VP: Be natural. Do it for the right reasons, and don't work with people unless you fully trust them. Be ambitious but don't expect too much. Find the right balance between ambitious and modest.

JB: Don't expect to sell out arenas straight away!

KE: Don't be scared of rejection at first.

What's been your proudest moment of being in this band so far?

DT: My highlight was joining the band!

When did Dave join the band?

DT: I joined at the end of January.

JB: We had something like six rehearsals before he played his first show.

DT: I was already a big fan so knew all the songs.

VP: We mainly play new songs now so I don't think you knew all of them. Maybe some?

DT: I knew most of them after the first rehearsal.

Are there any other bands you'd recommend for Drowned In Sound and its readers to check out?

VP: The Ills are great, and I also really like Kalle from the Czech Republic.

JB: There's a really vibrant underground hardcore scene in the Czech Republic too, and we've played with lots of great bands who are a part of that like Rutka Laskier.

MMXVIII is out on 12 October through Minority Records. For more information about Manon Meurt, please visit their official website, Bandcamp and Facebook pages.