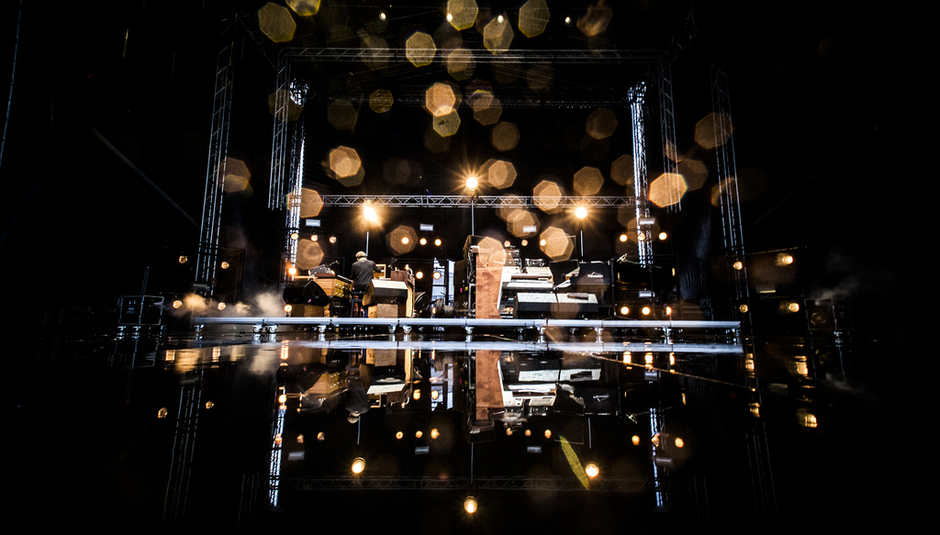 HAVEN Festival debuted in 2017 on a wave of hype and expectation, which it largely surpassed with flying colours, horrendous weather accepted. To many, the idea of a festival marrying carefully selected music (Bryce Dessner, The National) with Copenhagen's best food (Claus Meyer) and craft beer (Mikkel Borg Bjergsø, Mikkeller) scenes was simply too good to resist, and the festival's inaugural year delivered spectacularly on all three fronts. But what next? As enjoyable as the initial concept was, there also was a potential difficulty to maintain over the years; would The National headline every year? Is there enough of a beer and food crowd to draw in the same crowds? Will the festival have any luck or better prevention against the potentially bad weather? DiS went to HAVEN's second edition to find out.

Despite a thunderstorm the previous night, Friday is very pleasant: I kick the day off watching Phoebe Bridgers, who is playing the VÆRKET stage, which is at the opposite end from the festival entrance, giving us a chance to take in this year's grounds. What is immediately obvious is that HAVEN's second edition is much smaller than last year. To some extent, this isn't a problem: there are virtually no queues, getting from stage to stage is easy enough, and while the selection of food and drink is much smaller, what is present is generally of a very high standard. Anyway, Bridgers, unfortunately, can't quite overcome an overly excited, talkative crowd for her delicate, melancholic sound.

Jenny Lewis fares much better, largely because of her more upbeat, pop-rock stylings. We haven't had new music from Lewis since 2014's The Voyager but her cult fanbase can still pull a crowd regardless of when and where she plays, featuring both her solo ('Just One of the Guys', "See Fernando') and Rilo Kiley ('Silver Lining', 'Portion for Foxes') highlights to delight and charm the crowd in equal measure.

Dirty Projectors are the first act to really kick things off of the weekend. Post David Longstreth's self-titled breakup album, this year's Lamp Lit Prose has seen something of a return to form with an energy that had been missing from Dirty Projectors for some time. Longstreth's current amassed live band are equally up to the task of making the relatively new material shine, as highlights such as 'Zombie Conquerer' or 'I Feel Energy' displays.

Next up, Kevin Morby wins the first of two particularly tough clashes today, though, in my defence, I will be seeing BROCKHAMPTON very soon elsewhere. Morby more than makes up for the hard decision, however, which a perfectly breezy set to match the last of the summer sun of the day (and apparently, season). Morby's easy going approach somewhat enraptures the crowd who are willing to go along with him and his band's long, drawn-out jams and witness them form into the brilliant pop songs he has become well known for.

After some much-needed food comes the day's second awful clash, and this is a real doozy, Big Thief vs Kamasi Washington. This is a real killer, but in the end, Big Thief win out, partly as it's still possible the catch the end of Washington's set which turns out to be an excellent rendition of recent single 'Fists of Fury', so it's not all so bad. Besides, Big Thief are one of the most exciting prospects around just now, especially after their 2017 masterpiece (pun intended) Capacity. While on record the Brooklyn quartet can be a bit of a daunting prospect in terms of the sheer range of emotion they can elicit, live they are a far more upbeat affair, which is at first a little jarring but is quickly forgotten when they tear through an excellent rendition of 'Shark Smile'. For example, their gorgeous-yet-heartbreaking single 'Mythological Beauty' is played perfectly, but much more uptempo, with vocalist Adrianne Lenker even, in her own words, "fucking up the words" but approaches the whole ordeal with such grace that she is easily forgiven. This was a masterful set just as the sun set on the opening day.

And so, to tonight's headliner Arcade Fire. The multi-member Montreal act find themselves in an interesting situation currently, as last year's Everything Now was the first of their records to not receive glowing reviews. Perhaps as a result, their last tour didn't sell as well as years previous. For a moment it seemed like the indie-rock veterans' dominance of the genre was over. However, Win Butler and co still had an ace up their sleeve: they continue to be one of the world's premier live acts. And while Everything Now still remains the band's patchiest effort, its highs have aged pretty well, something the band seem keenly aware of, featuring only the album's highlights; the title track, 'Creature Comforts', 'Electric Blue' and 'Put Your Money On Me'.

Outside of this, Arcade Fire are on full on festival headliner big-hitter mode, and they never miss a step. While it's a shame to not get any of the criminally underrated Neon Bible (not even 'No Cars Go'!), the band rip through their greatest hits with much aplomb. Given Funeral's age, one would expect that people would be tired of shouting along to 'Power Out' or the chorus to 'Rebellion (Lies)' or all of 'Wake Up' (tonight joined by The National's Dessner twins) but no, they still stand up as one of the most cathartic and apparently timeless experiences to have at a music festival.

The weather seemed to be playing ball, however, some ominous warnings led many to fear a repeat of last year's washout. Still, for now at least, Wye Oak start the Saturday pleasantly enough. Then, the weather turned for the worst. In some regards, the blackening skies and oncoming rain suits legendary German post-punks Einstürzende Neubauten perfectly. The hard rain suits their heavy hitting, industrial style (something that can still be seen in the likes of Nine Inch Nails or even Rammstein today) as they open with the menacing 'The Garden' and its famous opening line "If you want me you will find me in the garden/unless it's pouring down with rain". Frontman Blix Bargeld is his usual curmudgeonly amusing self, complaining how "we usually make our instruments from British steel, but you know, because of Brexit, we're fucked!" while fighting through the rain to perform their classic 'Youme & Meyou'. Unfortunately, however, the weather becomes too much for the Berliners, as their version of 'Sabrina' and consequently, rest of their set, has to stop as the stage is becoming flooded. Bargeld apologies but concedes "all this electric equipment, we'd be playing with our lives if we continue, so we are sorry, but we will be back sometime soon."

Ironically, if they had held out a little longer, they would have received a break in the once-relentless weather, meaning Unknown Mortal Orchestra is able to perform is a brief sunny break in the prevailing storm. It's a strange coincidence, a pathetic fallacy if you will, that Ruban Nielson happens to get the weather to perfectly sync up with his set, but no one is complaining, as UMO's set fits perfectly with the falling summer sun and the crowd, in turn, are reciprocative.

As quickly as it left to make way for UMO, the rain returns straight after their set, and this time means serious business. Given the already suspended set on HAVEN's main stage only an hour and a half earlier, there is a genuine concern as to whether Nils Frahm who is scheduled to go up next is going to be able to perform, given his equipment is being covered up in rainproof tarps as we approach the stage. Luckily, as Frahm is performing solo, he can move his gear further back and remain relatively dry and despite the horrendous rain being at its worst, manages to deliver arguably the best set of the whole weekend. Much like earlier, the rain seems to fit the mood of his opener 'The Whole Universe Wants to Be Touched/Sunson' meaning the brave revellers who remain manage to get lost in the moment, despite nature's best attempts.

In the final stretch now, and one of last year's breakout stars Moses Sumney is closing the VÆRKET stage. Sumney's impressive debut Aromanticism has turned many heads onto this young talent, which opener 'Don't Bother Calling' makes immediately abundantly clear. His recent single 'Rank & File' from his new Black in Deep Red, 2014 E.P equally has shown yet another leap forward from this very promising individual, while a stunning cover of Björk's 'Come To Me' fits perfectly in his set. Equally the crowd are mostly along with him for the ride, but there's also a prevailing sense of fatigue in some amidst the crowd, clearly, a bit washed out from the weather and Frahm's simply stunning set just before. This no fault of Sumney's, it's just a difficult slot to fill as the last support before the festival's final act.

Especially when that final act is the legendary Kraftwerk, let's be honest. Approaching 50 years in the game, and the Düsseldorf-based electro-pop band still remain the masters of the genre. There is a notably different (re older) audience on the Saturday of the festival, no doubt in no small part due to the three German pioneers of electronic music - albeit in different stages of the genre's trajectory - who play the main stage today. However, without Kraftwerk, neither Einstürzende Neubauten nor Nils Frahm nor many others, for that matter, would be able to exist, and it is not at all difficult to see why. I wrote earlier how Arcade Fire has one of the most impressive back-catalogues of recent times to rely upon for a headline set, well just look at Kraftwerk's as an all-time contender. 'Computer World', 'Computer Love', 'The Model', 'Autobahn', 'Tour de France', 'Trans Europe Express', 'The Robots'... and that's just to name a few. While the "3D" aspect of this show sometimes left things to be desired - at times wearing the provided glasses made little to no difference to the screen - the band's strong visual aesthetic still remained just as impressive as the many, many, many incredible songs the band have in their arsenal. So while Kraftwerk may not be quite as joyous as Arcade Fire, they remain more than capable headliners. The need for proper cover, either by opening the Baghavn brewery site up to the public again, or a larger tent to perform in, needs to be addressed for next year, but aside from that, this still remained a very successful celebration of great music, food and beer.

Land Of The Midnight Sun: DiS Does Se...