Land Of The Midnight Sun: DiS Does Secret Solstice 2018

Land Of The Midnight Sun: DiS Does Secret Solstice 2018

Stepping out of the rugged, custom-built MAN truck is like stepping onto another planet. It’s 2° Celsius, visibility is about four metres, and a frozen wind blasts across the desolate, icy landscape into our faces. We’re near the top of Iceland’s second largest glacier, Langjökull – a journey that’s taken us nearly four hours from Reykjavik – for a very special event; what’s billed as the world’s only rave inside a glacier. A tunnel takes us deep inside the glacier itself, where it’s even colder and an eerie blue light emanates from the pristine ice. The network of tunnels is open for normal tours all year round, but today the festival has set up a makeshift bar and a PA for US techno maestro Dubfire who’s soon spinning downtempo house and minimalist beats. Some people are wearing animal costumes, plenty more have brought glowsticks, and one couple even avail themselves of the tiny chapel to get married (their best friend took an online course so he could officiate). Welcome to Iceland then. 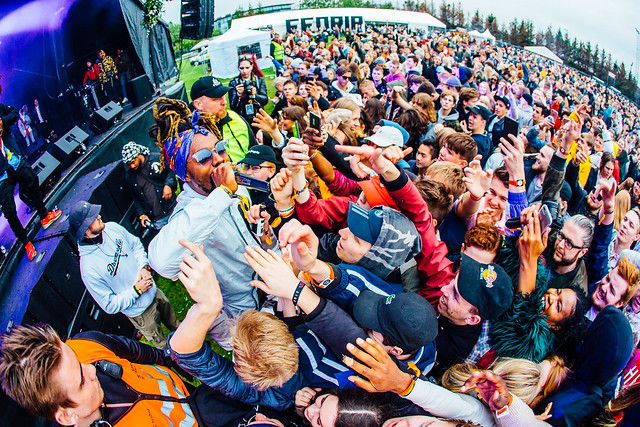 If you’ve been to Secret Solstice, you’ll know this is just one of the many unique experiences offered by the festival. There’s also a geothermal pool party soundtracked this year by YokoO and Lee Burridge, a “magical musical experience” in a 5,200-year-old lava tunnel, and the prospect of watching Steve Aoki and Bonnie Tyler not only on the same day, but on the same stage. It’s an event that lives by it’s own rules, tearing up convention and forging a defiantly unique path, much like Iceland – and its people – themselves.

The lineup is, to say the least, eclectic. Aside from Aoki and Tyler, the other headliners are Slayer, Gucci Mane, Stormzy, with the rest of the schedule featuring a smattering of up and coming “buzz” names (IAMDBB, GoldLink), acclaimed indie (Death From Above 1979, Dream Wife), and Icelandic bands representing every possible genre and style. Afternoons are almost exclusively for the locals, and partaking in some of the trips means missing out on the likes of “Iceland’s loudest band” Pink Street Boys, the fem powered horror rap of Fever Dream, and the distorted rock of Casio Fatso.

One act we do catch is Reykjavíkurdætur, an agit-rap collective who sound like the Spice Girls raised on Cardi B and styled by Ali G. They draw a sizable, and extremely young crowd to the main stage on Thursday, running through powerful numbers about male privilege, rape culture, and first world inequality. Given how lustily some of their songs are sung back at them, and the enthusiasm of the crowd’s dancing, their stated aim to “actually change society through our music” doesn’t seem so far fetched. They’re certainly a more positive influence than Aoki, who follows immediately after with a predictable hour of chart-friendly “bangers” and self-congratulatory preening. 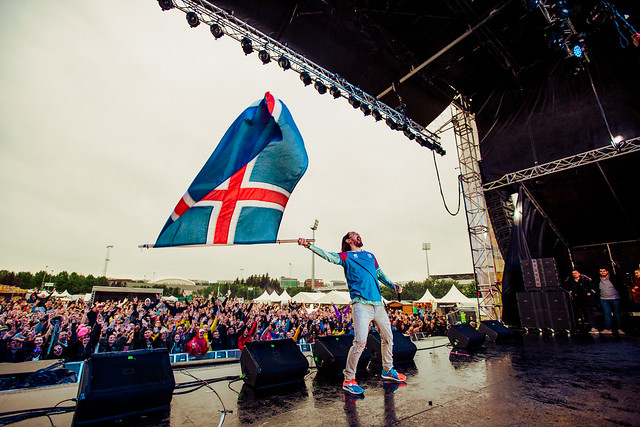 “Hold up! I want to stop the music for a sec to take a picture!” he hollers halfway through some generic EDM nonsense. It’s a moment that sums up his set – and his ethos – and while the drunk teenagers down the front seem impressed, he spends so much time cavorting around the stage and dancing on his DJ table that you really do wonder who’s pressing play and how much of a “performance” this is.

He’s completely upstaged by Tyler, the consummate professional who’d already appeared on Top Of The Pops and had several hits before Aoki was even born. Striding on stage in a studded leather jacket and cowboy boots, she storms through a career-spanning set, the crowd – which now includes those teenagers’ parents – singing all the words to ‘Total Eclipse Of The Heart’ and ‘Holding On For A Hero’. Her voice is admittedly not what it was, but retains a remarkable power and range; even when the highest notes are cannily left for the audience to sing, the hits still sound magnificent and send a chill down the spine.

Friday is dominated by rap and hip-hop, and brings one of the weekend’s most disappointing performances. IAMDBB’s glacial, trap-infused R&B falls flat, blown away by the wind gusting across the main stage. Even lighting up a joint – “Bitch needs to smoke!” she hollers – an act that many warning signs state would see fans not just kicked out of the festival but carted off to jail, causes little friction, as if even the police have been bored into submission. 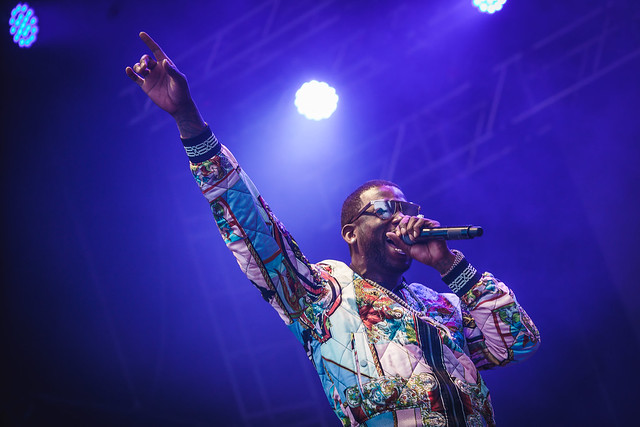 Much better is Washington DC native GoldLink, who whips the crowd into a frenzy with his loose, expansive rap. A moshpit gets bigger and bigger before each track as he goads everyone to get ever crazier, throwing himself around as the beats explode into life. The sense of compressed energy is compounded by Gucci Mane’s late arrival – his hype man spends a good 35 minutes cajoling everyone to shout “Gucci!” louder and louder – so by the time he eventually gets underway, aggro and angst have overtaken excitement.

Several crowd surfing teenagers are treated somewhat brutally by security, and the pushing and shoving down the front threatens to turn nasty several times. It’s an unpleasant experience, yet one that Mane seems oblivious to; he continues to wander the stage, grin plastered across his face, serving up a generic, listless set that does little to justify his star billing and attitude. We leave early for the warm, embrace of Dream Wife’s joyous, celebratory pop-punk that clatters defiantly forward in the face of wind, drizzle, and the echoing beats drifting across from the main stage.

“This is our first time playing in Iceland,” announces Slayer frontman Tom Araya. “Unfortunately, it will also be our last.” Everyone knows this is one last sweep of the globe by the thrash metal legends, yet the groans and pleas to rethink are heartfelt and tinged with sadness. The band have lost none of their vim or power, and storm through a hit-laden set that spans their 37-year career; up close, the likes of ‘Angel of Death’ and ‘Mandatory Suicide’ shimmer with menace, clever hooks and gorgeous melodies swimming through the maelstrom. Teenagers and middle-aged men alike jostle to catch one of the many plectrums thrown by Kerry King and Gary Holt while one fan, resplendent in band tattoos and a denim jacket covered in Slayer patches, looks close to tears on being handed a set list at the end, a cherished memento from this mighty band’s one Icelandic excursion. 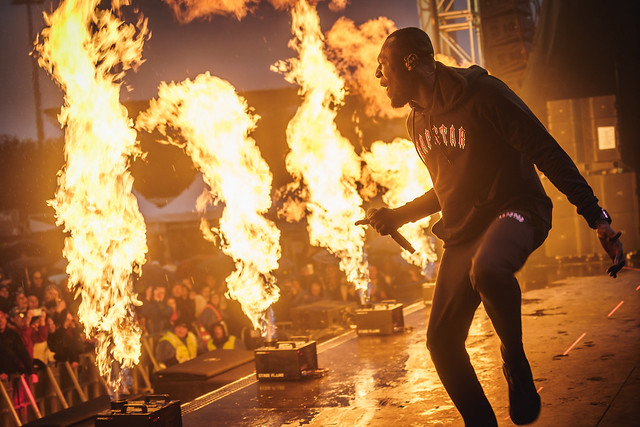 Despite being the height of summer, the mercury never rises above 10° degrees, low, grey clouds constantly hugging the city’s skyline. At times the drizzle is almost incessant, but on Sunday it turns into a full-blown storm for Stormzy, the rain lashing down and turning parts of the site into a quagmire. It doesn’t dampen anyone’s spirits though, or Stormzy’s enthusiasm; he demonstrates exactly what Mane was missing 48 hours previously. He performs with verve and brio, bouncing around between jets of flame, and the crowd – noticeable less intoxicated than on other nights – respond in kind; ‘Shut Up’ provokes mass delirium, limbs and mud flailing in time to the grime anthem.

He also shows his softer side too, getting a fan on stage to rap J Hus’s part in ‘Bad Boys (the London rapper is supposed to be here too, but was unable to fly due to an unfortunate altercation with the Metropolitan Police). It’s a boisterous end to a roller coaster weekend and a festival that mixes the average and the bizarre with moments of greatness. Four days here is such a unique experience that it seems almost churlish to highlight shortcomings in the programming. Of course, it’s impossible to get a Radiohead or Bjork to headline every year, but a little more care in terms of musical direction would improve Secret Solstice immeasurably; they have everything they need to be just about the most unique, special event on the music calendar, and it would be a shame to see them fall short.

Secret Solstice takes place in Reykjavik every June over the Summer Equinox. For more information about the festival, including dates and tickets for the 2019 edition, please visit their official website.

All other photos: as indicated

The DiS Preview: Eight To Watch At In...