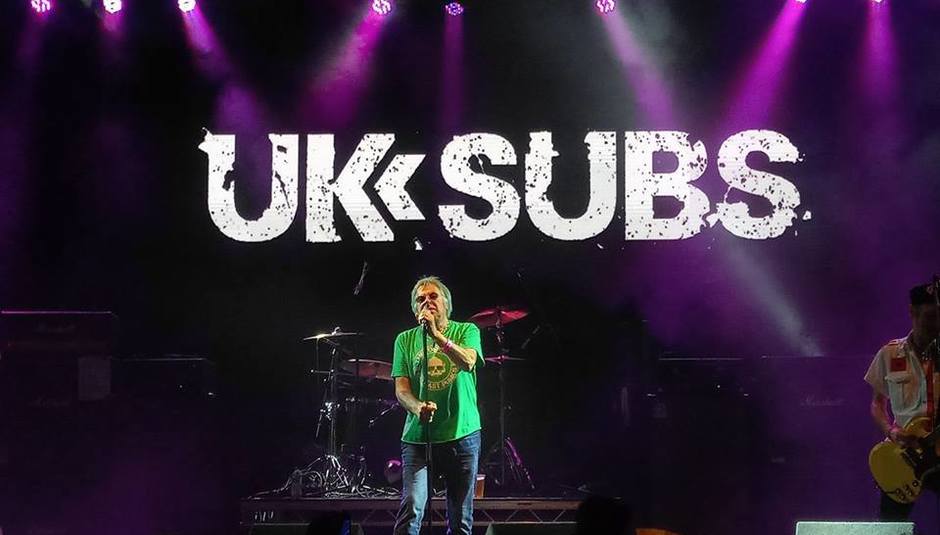 Take a walk along Blackpool's infamous Golden Mile and you'll see the standard seaside fare of amusement arcades, hotels with names like Royal Seaview, and endless bars competing for the same punters by offering £2 a pint with a free shot into the bargain. The candy floss and slush machines rolling out sugary delights while vendors sell rock in all varieties and flavours from strawberry milkshake and tequila to cheeseburger and cannabis make for an eye-catching, if not necessarily tasty, aside. It's exceptionally busy for a Thursday lunchtime and without being judgmental, it's probably fair to say the majority of people we encounter are of the retirement age.

Away from the front just a couple of streets back lies the Winter Gardens, an ornate building constructed in the late 19th Century. Housing eight different rooms as well as numerous bars and restaurants, it's a lavish establishment and a far cry from the musical delights DiS will encounter over the next four days. Indeed, the last time we were in this building was November 2013 to be precise; Arcade Fire had just launched Reflektor before putting on a spectacular show in the Empress Ballroom, it's 6000 capacity making it this weekend's main stage of sorts.

However, this time it's the turn of Rebellion, the world's biggest celebration of all things punk rock. Now in its 22nd year having first opened its doors (as Holidays In The Sun) back in 1996, it really is an international affair as we speak to various people who've traveled from places as far and wide as Madagascar, Brazil, Siberia, and California's Long Beach just to be here. It's also reminiscent of an extended family gathering. In the pubs and bars that surround the Winter Gardens old acquaintances are reunited and new ones made. The Rose And Crown across the way becomes the unofficial hub while Churchill's, across the market square, acts as a regular meeting point, even housing its own punk rock karaoke on the final day (Sunday).

The demographic covers every generation as people in their seventies relay stories of meeting The Clash in Sheffield on the White Riot tour, or sharing a beer with Jello Biafra in Derby. CDs and badges are swapped and fliers passed around as bands clamour for your support prior to their sets later in the day. Locals swarm around for photos of outrageous clothing and hairstyles yet all in all, its one of the most welcoming festival environments we've witnessed on UK shores in a long time. Whatever rivalry between punk and skinhead factions may have existed forty years ago certainly doesn't today.

With over 300 artists performing across its four days, Rebellion could perhaps be forgiven for sticking to a tried and tested formula occasionally. So it's to their credit this year's line up doesn't always state the obvious. Instead, they've chosen to shake things up and take a few risks, not least in booking current band of the people (and soon to be band of 2018) Idles, their name standing out like the proverbial sore thumb amidst Thursday's line up of Rebellion mainstays TV Smith, Splodgenessabounds and The Buzzcocks. Even the band themselves look nervous before going on stage, yet any trepidation is quickly dispersed within the first three verses of opener 'Heal/Heel'. As is the norm at Idles shows now, the feeling of community becomes omnipresent both on and off stage. Each song is sung back at the band word for word as people who've never met before this evening bond over songs like 'Mother' and 'Danny Nedelko', new friendships immediately formed in the process. We're informed afterward it was actually one-in, one-out for the duration of Idles' set, which considering they were also playing the main stage, is no mean feat considering it was their first time here.

Beforehand, Mansfield's Riot Squad take yours truly back to the scenes of his first hometown gig many moons ago, songs like 'Bullshit & Lies', 'No Escape' and 'Fuck The Tories' sang with the same anger and venom as they were three-and-a-half decades ago. It's not the first time memories of that show in the now-defunct Mansfield Pit Theatre come flooding back, as that evening's support band Resistance 77 play a barnstorming set on the final day largely characterised by their ethos and clarion call, 'True Punk And Oi! Will Never Die'. While there are numerous opportunities to relive one's past and wallow in nostalgia, Rebellion also gives countless new acts their chance to shine.

Over the course of the weekend, DiS becomes regular visitors to the Rebellion Introducing stage. Situated in the Dereham Lounge next to the Winter Gardens' main entrance, it turns out to be one of the consistently busiest rooms of the entire weekend. Italian street punk outfit Knife 49 kick out an almighty racket during Friday teatime, while Dream Nails' riot girl inspired feminist anthems and The Baby Seals' vitriolic rants make for an impressive double whammy to kickstart Sunday evening. Over in the Pavilion, Anglo American upstarts Turbulent Hearts rekindle the flames of early grunge where Babes In Toyland and The Lunachicks left off, while Yorkshire's Geoffrey Oicott take to the stage resplendent in cricket whites along with bat, stumps and ball while singing songs about Robin Hood being a Yorkshireman among others. We even get the odd guest appearance as Rancid's Lars Frederiksen moonlights on guitar with eighties Oi! band and diehard Millwall fans Last Resort.

There's even an all seated Opera House where some people go to relax, which is duly disturbed by rabble rousing sets from The Lovely Eggs, Theatre Of Hate, and Michael Monroe among others. The former get better with every passing show, their anthem for the couldn't care less 'Fuck It' eradicating any concerns over the technical issues that threatened to hamper the duo's set early on. While Kirk Brandon and co turn back the clock to an era where punk was moving away from its nihilistic beginnings, instead becoming more experimental both lyrically and musically - TOH being one of the first bands of their ilk to use brass instrumentation as a focal part of their music - Monroe also brings the house down, literally, hopping onto the speaker stacks then striding buoyantly across the rows of seats - audience members still seated - never missing a word or note in the process. Playing a set that's heavy on Hanoi Rocks material culminating in a glorious 'Up Around The Bend' as the penultimate number, he's a revelation and a fine example of Rebellion's diverse booking policy as far as the punk musical spectrum goes.

Of course, it wouldn't be a punk gathering without Charlie Harper and the UK Subs, and he's here for the entire four days even though his band don't play until Saturday, manning the merch stand every day with his wife Yuko. When he isn't there he can normally be seen watching bands, normally on the Introducing stage, which just exemplifies his commitment to the punk rock cause even at the ripe old age of 74. When his band do take to the stage in front of one of the biggest audiences of the weekend, they deliver a masterclass in punk rock. Playing a career spanning set that doesn't drop in pace from beginning to end, both Harper and band prove they're anything but finished just yet.

The second wave of punk is well represented even if the late cancellation of Friday's headliners The Exploited due to singer Wattie Buchan's ongoing health problems was a bitter blow to many. Legendary thrash punks Discharge played an impressive, full throttle set on the Club Casbah stage, current singer JJ Janiak - the band's most recent addition - proving a particularly imposing figure while spitting out a selection of the band's best-known numbers in impeccable fashion. Fellow Midlanders GBH also turn the clock back to 1983 with a set that once upon a time would have made Messrs Hetfield and Ulrich form a band. Dick Lucas is a regular face at Rebellion being the frontman of three different bands (all of whom are playing at various points of the festival) but it's his first and best outfit, Subhumans, who gain the plaudits here. 1983's Time Flies... But Aeroplanes Clash is still considered to be one of the most influential albums of its time and even now thirty-five years later, both record and band still sound as angry and relevant as they did back then.

Elsewhere, a reformed and rejuvenated Wildhearts pack a kingsized punch in delivering a greatest hits set that's bristling with energy and vitality. With the classic line up of CJ, Ginger and Danny McCormick back together along with drummer Rich Battersby, they're a potent force to be reckoned with once more, 'Caffeine Bomb' and 'Red Light Green Light' both given the healthiest of receptions out front among others. Californian hardcore pioneers The Adolescents and Texan thrash metallers D.R.I. also deliver blistering performances far outweighing their veteran statuses, the former poignantly playing in front of a backdrop that simply reads "SOTO" as a tribute to bassist Steve Soto, who recently passed away.

It's left to the figurehead of punk himself, John Lydon to close this year's festival with Public Image Ltd. Wearing a smart shirt and reading glasses, it's difficult to tell if he's being ironic or otherwise. However, save for an unnecessary attack on Jeremy Corbyn and the Labour Party at the beginning of the set, both Lydon and his band are flawless. Switching from the band's more experimental, dub-heavy work back to song-based material with consummate ease, 'Warrior' in particular sounding menacing, they're a revelation and a fitting way to close punk's biggest party.

Rebellion takes place in Blackpool on the second weekend of August. For more information about the festival, including dates and tickets for the 2019 edition, please visit their official website.