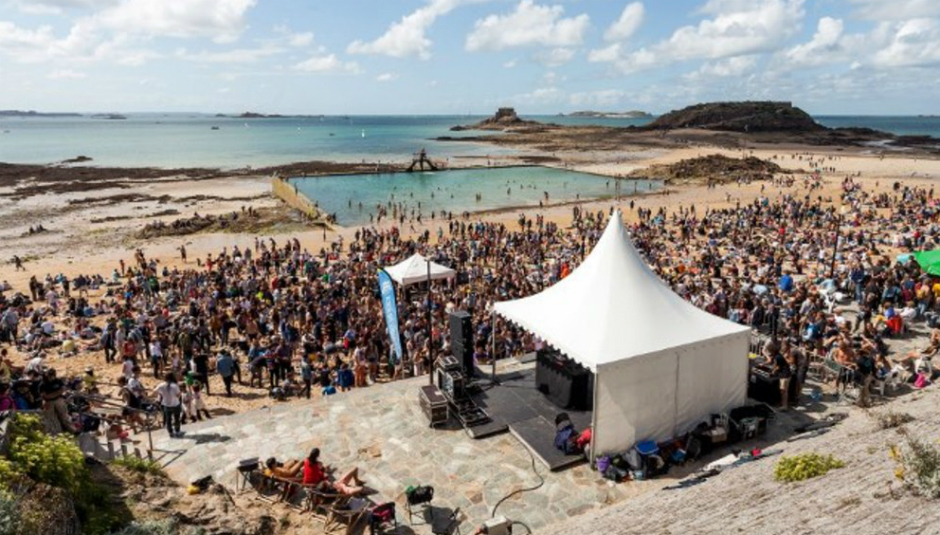 Too often, festivals boast of their idyllic settings when the big reveal is actually a fenced-off stately home, fairy light forest trails and installations not much better than a load of dream catchers. We hit peak festival years ago, with a default setting of calling bullshit on ‘boutique’ side stages, healing fields, face painting, and ostrich burgers for a tenner.

La Route du Rock however, in the city of Saint-Malo in Brittany, does away with the hippie sideshows and just throws a party in an 18th-century fortress, smugly thinking: “Nailed it.”

Spectacular setting aside, La Route du Rock is one of France’s best festivals for the discerning music fan, and has been running on the Brittany coast since 1991. The twice-yearly weekender (there’s also a winter edition) is a showcase for French and international acts, with a music policy that ranges from indie to noise-rock, shoegaze, avant-garde composition, pop, techno, post-punk and beyond, with the underground rubbing shoulders with certified legends (Aphex Twin, Nick Cave, PJ Harvey, Portishead, Pulp, and The Cure have all played in previous years).

And they don’t make it difficult: Brittany Ferries does the heavy lifting with a full festival package for £180, including the ferry from Portsmouth, camping pass, and the three-day festival wristband. La Route du Rock runs from August 16-20, and the ferry company is taking bookings up until 24 hours before the festival kicks off in case you need a bit more time to think about cobbled streets, raving in a castle, and quality French wine.

We can think of many reasons to go, but here’s five to get you started...

Well, kinda. The journey to Saint-Malo involves an overnight ferry (let’s call it a ship) from Portsmouth, so you’ll go to sleep and wake up with the city walls just ahead and your lungs full of sea air. It’s a greater adventure than the usual festival caper, scrunched up in your mate’s car surrounded by slabs of Carling and multipacks of Doritos. Disclaimer: Idyllic ferry journey back to England can’t be guaranteed, but all that depends on how your music to food to booze ratio pans out over the weekend.

The port town of Saint-Malo has a reputation for being one of the world’s most beautiful cities, with ancient walls, cobbled streets, sandy beaches, markets and an endless selection of cafes to refuel and get your bearings after a hard night festivalling. Plus, remember the festival is held in an actual fort, and there’s a stage on the beach to fill the afternoons with DJs, bands, and dips in the sea. Or maybe just top-up glasses of wine if that seems too adventurous.

Some festivals have such a sprawling line-up, you’d need a project manager to work out your timetable. The general drill is go through the timetable print-out with a highlighter a few days beforehand, forget all about it, then find it at the end of your tent in a pool of gin on the Monday morning and use it to piece together the weekend, Memento-style. La Route Du Rock has the same idea as Pitchfork Paris: two stages facing each other, one band finishes and you literally turn around and another band starts on the other stage five minutes later. This could only work if the quality control levels are sky-high. Which brings us to…

The festival has been running for 26 years, with a formula that doesn’t change much, so they must be doing something right. La Route du Rock is also one of France’s hippest booking agencies, so it’s not some clueless once-a-year festival crew going through the indie A-Z. The line-up this year flits from French art-pop legends such as Sebastian Daho, Phoenix, and Charlotte Gainsbourg; avant-garde composer Nils Frahm; post-punk rage from Protomartyr and Shame; droney, cold wave vibes from Föllakzoid and The KVB, and leftfield indie from Ariel Pink and The Brian Jonestown Massacre, just for starters. There’s also a double celebration of the true punk icon Patti Smith, whose Horses documentary is being aired in the city before her headline slot on Saturday night.

And DJs will also keep things lively into the early hours – The Black Madonna with gritty house, Ellen Allien with deep techno, and Veronica Vasicka with anything from 80s coldwave deep cuts to industrial, electro, post-punk and electro.

You’re running out of time.

No, this isn’t an existential cry for help, but summer will be over before you know it, and festival season will be put to bed in a few weeks. If you haven’t got your quota of dancing in a field you better hurry. You’ll probably spend as much going to La Route du Rock as Boomtown, Green Man, V or (God forbid) Reading & Leeds, so it’s worth a punt. Come to think of it, with the Brexit shitshow it mightn’t be that easy to go partying in mainland Europe after March 2019, so maybe that existential cry for help isn’t that far away.

La Route du Rock takes place in Saint-Malo, Brittany, on 16-19 August. For more information about the festival itself, and the lineup, please visit their official website. For the Brittany Ferries Festival Package offer, please click here.

"The marauder mentality, it extends f...