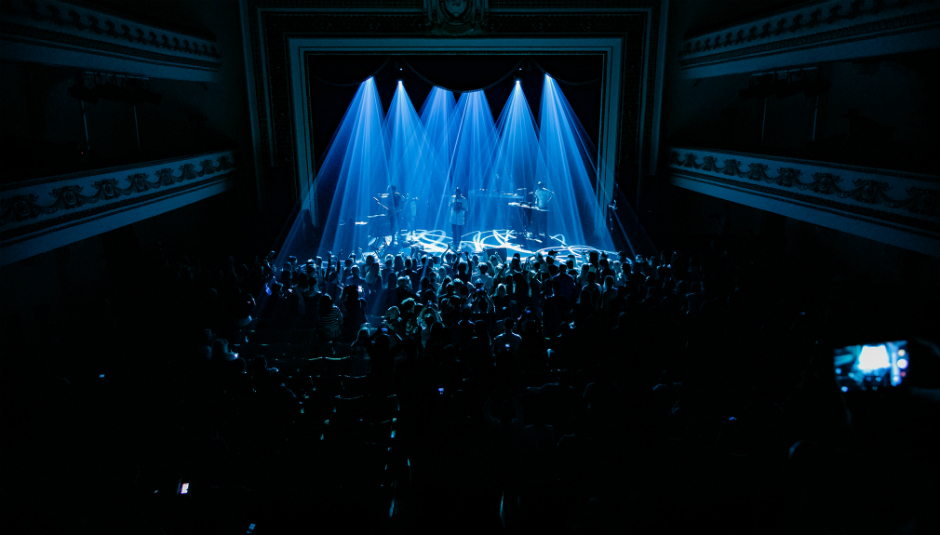 The Bold & The Brave: DiS Does Tallinn Music Week

The Bold &amp; The Brave: DiS Does Tallinn Music Week

It’s late. Very late. Someone’s passing round shots. Barely two feet in front of us Lynch, a Slovenian punk band, are pulverizing their instruments into oblivion as they near the end of their set, a sweaty, raucous half-hour complete with strobes, feedback, and moshing. A guitar is thrust into a colleague’s hand, and he’s implored to join in; he duly complies. His playing is best described as “loose”, but no-one cares; we’re all too lost in the madness, band included. Dazed grins greet the passing of the storm, and people drift off into the night in search of more moments like this. They’ll no doubt find them, for this is Tallinn Music Week, an event that both redefines what a festival should be and excels at confounding expectations.

Born ten years ago, the founders’ aim was simple – to give Estonian music a platform to engage with industry professionals at home and abroad, and gain wider recognition. To that end, it’s been a resounding success, with several Estonian acts – most notably Tommy Cash - making waves in international waters. It’s not exclusively a music festival either; they describe the event as “our contribution to a better society” and focus on cultural and ethnic diversity, equality, and enlightenment.

And so one can, if one chooses, to attend talks on “Competing with machines”, public space and democracy, and something called “Design thinking”. Big data is another hot topic, with numerous panels teasing out its ramifications for music, society, and artists, particularly how data savvy labels and managers can utilize it to make more informed – and financially lucrative – decisions. Delegates include Harvard Professors, public policy analysts, urbanists, economists, politicians, and even a cognitive neuroscientist. Can a festival save the world? It appears that Tallinn Music Week is trying to find out. 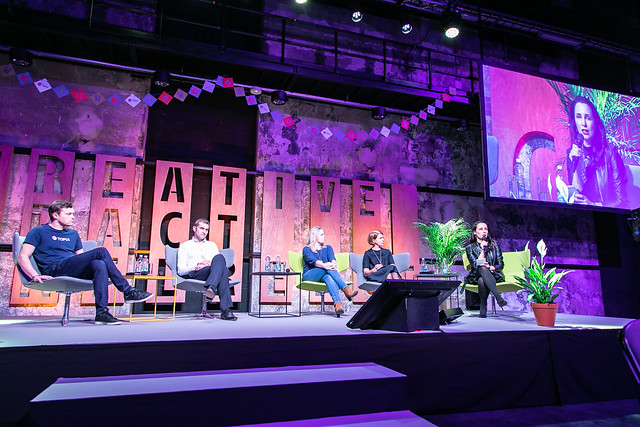 But we’re here (mainly) for the music; 259 artists scheduled over four days and countless venues. Trying to navigate a coherent path through each night proves nigh on impossible, so we opt for the alternative; recommendations, going with the flow, being dragged along by fellow journos, or simply deciding that a band’s name made them too intriguing to miss (hi Rotten Sperm!). It leads us down dark alleys and to basement clubs, to agony and ecstasy, and to a hipster-indie Canadian band that are two-fifths Keith.

“Of course he’s called ‘Keith’,” notes a colleague drily of the guitarist wearing the type of bad jeans, t-shirt, and cap combo that was last popular in the 90s. We’re watching Walrus run through their fuzzed-out, scuzzy tunes, a kind of soulful, spacious indie-pop that’s hugely unoriginal but charming nevertheless. They’re performing at the Canadian Showcase, which means wild salmon and poutine on silver platters, hoppy craft ales, and a mixed bag of bands.

Walrus are preceded by Samurai Champs, an electro R&B and hip-hop duo who specialize, in bright, poppy urban tunes that are more likely to conquer charts than critics’ lists. Far better are Little Destroyer, a trio who deliver dark melodies blended with electronic pop and play with a manic intensity that borders on the aggressive. They’re brash, in your face, and something of a revelation, songs about health issues and equality fizzing with menace and catchy synth lines. 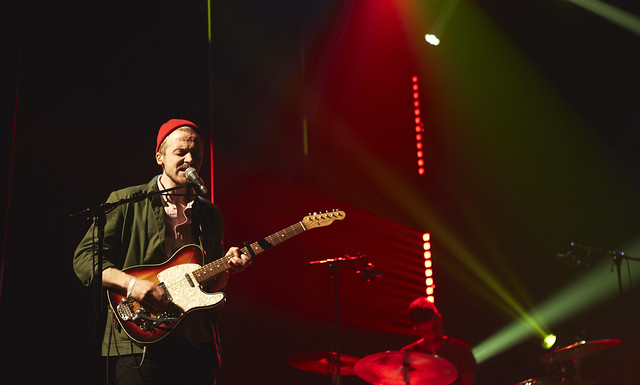 An intriguing part of TMW is the number of artists who perform multiple times. So it is that we encounter Little Destroyer again on Friday, playing before pop-punk Londoner Suzi Wu in Von Krahl Theatre. Her set is a delightful, energetic joy, her studied, drawling sing-speak narrating tales of fumbling teenage romance and youthful indiscretion. It’s also her second performance of the night; earlier, she was first on at KuKu Club, opening a night of weird, experimental pop and featuring Estonia’s rising superstar Mart Avi.

First up though is Inturist, the avant-garde audio-visual project from Evgeny Gorbunov, better known as one-half of twisted art punk rockers Glintshake. Building his animation and songs from scratch, completely live, adds a surreal and unpredictable edge to his set; several times, you get the feeling it’s all teetering on the edge of disaster, yet his mix of simple riffs and dazzling passages of virtuosity has a certain charm, and soon everyone is bopping along contentedly to the off-kilter rhythms.

It’s good preparation for Avi’s weird and wonderful musical experiments, which at times seem like they’re being beamed in from another dimension. “Conceptronica,” says prominent music writer Simon Reynolds, “music for trans-humanist wavelengths,” says the festivals own website, and while is true he’s spent more time dazzling critics than reaching the wider listening public, it can’t be long before his unique stylings attract the popular acclaim they so richly deserve.

His dubby, neo-noir pop is futuristic but borrows a number of motifs from the past, not least 80’s darkwave and post-punk. It’s intellectual too, and extremely well put together – at times, he sounds like Scott Walker indulging in some sunny, R&B romp – and as an artist, he’s the very embodiment of a post-everything music culture where entire histories can be consumed with the click of a mouse. His look – a cross between communist-era East Berlin and Blade Runner dystopia – adds to the mystique, as does his penchant for wearing a buttoned-up trenchcoat, trainers, and frequently performing under an umbrella. In short, he’s a star-in-waiting, and precisely the sort of daring, forward-thinking maverick the music world needs more of. 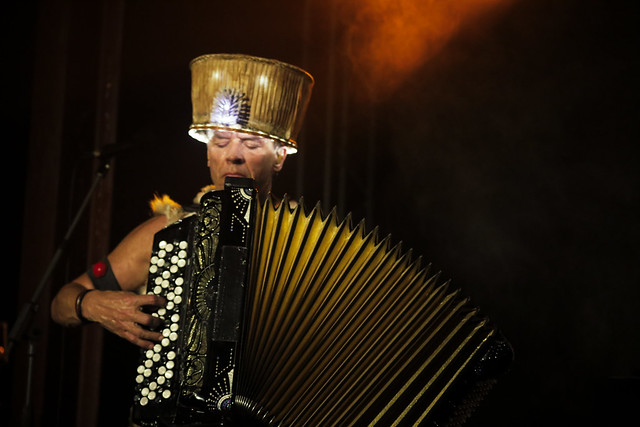 Part of TMW’s charm is sheer volume and variety of music on offer, and not knowing which madcap genius you’re likely to encounter next. You could find yourself enchanted by the restless intensity and oddball pulse of Karpov Not Kasparov’s electro-pop which, yes, is heavily influenced by chess (their songs are apparently structured to reflect the rules of chess and the strategies of Grand Masters. No, me neither). Then there’s Elizabete Balčus, whose “neo-psychedelic dream pop” blends looped flute, soft beats, and gentle, flowing melodies into a theatrical, captivating whole.

Back in KuKu Club, there’s the impressive double bill of Kate NV – the other half of twisted art punk rockers Glintshake – and local legend (although she’s now based in LA) Maria Minerva. The former plays a stripped down form of electro-pop, heavy on loops and samples, that manages to sound blissful naïve and incredibly savvy at the same time, while Minerva concocts more emotional, sugar-coated fare that’s part electro-goth-disco and part studied French chanteuse. Both are, in their own way, captivating, and indicative of the bold, fearless spirit that so many Eastern artists – and those who’ve made it their home – seem to possess.

Blazing a trail, and resolutely following one’s chosen path seems to come naturally at Tallinn Music Week. It’s why they have the actual president delivering the opening speech, it’s why TMW is now an iconic creative hub, it’s why people here are invested in the future of culture, cities, and urban society, and it’s why it’s perfectly acceptable for a band to hand a guitar to grinning member of the Fourth Estate and expect to the madness to simply roll on into the night.

For more information about Tallinn Music Week, including dates and ticket info for the 2019 edition, please visit the festival’s official website.

"The marauder mentality, it extends f...