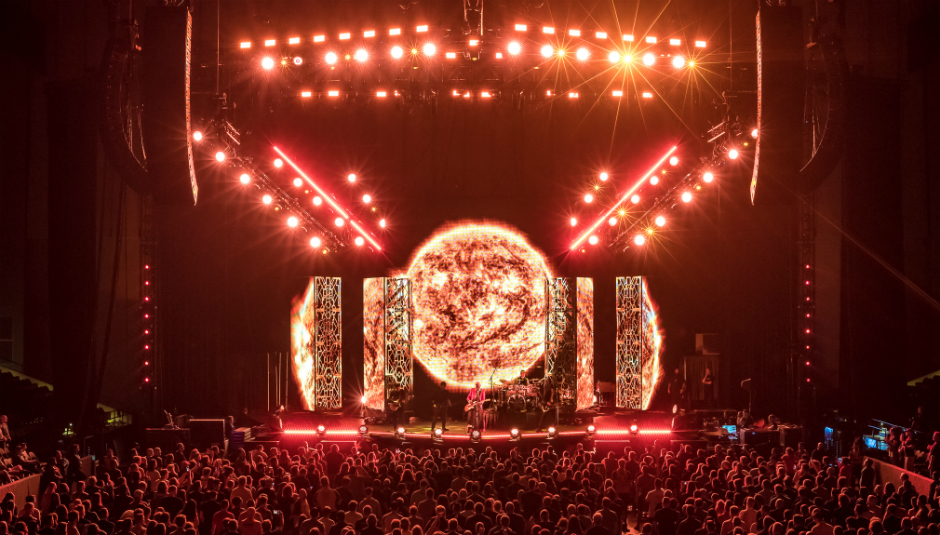 “If we’re going to do this, we’re going to do it properly”. You imagine that’s what Billy Corgan said to his bandmates when putting together their “reunion” shows. After years of ranting actively against nostalgia tours and pushing forward with new music to positive reviews but limited sales, Corgan has embraced the past. Whether for the money (and who can blame anyone for that?) or to celebrate the legacy of a remarkable career and a renewed relationship with old colleagues, a version of the Smashing Pumpkins featuring three-quarters of their classic-era line up is on the road playing a hefty set of songs from their first five albums, Gish (1991), Siamese Dream (1993), Mellon Collie And The Infinite Sadness (1995), Adore (1998) and Machina:The Machines Of God (2000), plus the odd cover.

For fans of Corgan, this is an interesting development. Previous Pumpkins tours have always included lots of new material, deep cuts from the back catalogue and extensive reworkings of older songs. You’d get hits, but rarely all of them and they’d usually be some extended jams and re-versioning afoot. That was as true of the Pumpkins of 1990 as it was of the band who toured Corgan’s last album under the SP name, 2014’s Monuments To An Elegy. Shiny And Oh So Bright is a different kind of beast. While there is new material on the horizon (an untitled album produced by Rick Rubin is already in the can) only one song, ‘Solara’, has made it to the set. Instead, Corgan gives us every hit in the canon – only three singles from that band’s first decade go unplayed (‘I Am One’, ‘Tristessa’ and ‘Perfect’ if you must know), and the rest are faithful renditions of the originals. No cyber-metal re-working of ‘Ava Adore’, no acoustic softening of ‘Today’, no extended jams on ‘Bullet With Butterfly Wings’.

Instead, we get a celebration of Pumpkindom, a grand-scale reminder of everything that made this band so meaningful in the first place; a scrubbed and brushed Smashing Pumpkins with extensive and ambitious set design, all the songs you want to hear, and an emphasis on entertainment overindulgence. It’s a set that is, appropriately enough, shiny and oh, so very bright. Tonight (tonight, so bright) Billy Corgan is giving us a show.

For some Smashing Pumpkins fans (particularly those who have drifted away in the last decade or so), this is the tour they’ve been waiting for. Affable guitarist James Iha is back in the fold for the first time since 2000 and on/off drummer Jimmy Chamberlin, one of the most remarkable talents to come out of the alternative rock generation, is back behind the kit. Original bass player D'arcy Wretsky is absent (it’s complicated. Don’t ask.) but we do get Jeff Schroeder, Corgan’s right-hand man since he reactivated the Pumpkins brand back in 2008, on third guitar, Australian folk singer Katie Cole on keys and backing vocals, and English bass player Jack Bates, son of Joy Division/New Order legend Peter Hook. It’s a six-piece band capable of turning out one hell of a racket, and Corgan uses each to maximum effect.

This isn’t just a Smashing Pumpkins show, this is a love letter to the band’s first great phase. The opening ‘Disarm’ is a magical rush, delivered solo by Corgan as a screen showing the annotated highlights of his band’s past splits in two to allow him onto the stage. It’s as affecting a start for an arena rock show as you’ll find. The crowd is eased in by the dreamier psychedelic-pop of ‘Rocket’ and ‘Rhinoceros’ before the night’s first twist: The triple-guitar line up allows Corgan to abandon his instrument and go full-frontman on a cover Bowie’s ‘Space Oddity’, mounting a bridge behind his band, draped in a silver cloak, before turning up the rock on ‘Zero’ and ‘The Everlasting Gaze’. The three guitars mean there’s a lot of light-and-shade available here, used to great effect on goosebump-raising versions of ‘Soma’ and ‘Porcelina Of The Vast Oceans’ (can we have ‘Thru The Eyes of a Ruby’ next time please?). It also means the pulverising wall of noise on ‘Bullet With Butterfly Wings’ and ‘Solara’ is particularly potent.

For all the crowd-pleasing it’s also a show unafraid to go deep. The creepy techno nightmares of ‘Eye’ and ‘The Beginning Is The End Is The Beginning’ (a b-side from a single hardly anyone remembers, taken from a film no-one liked), are among the most effective moments here. A faux religious icon depicting a robed Billy Corgan is rolled through the auditorium for a cover of ‘Stairway To Heaven’. Few would have asked for a version of ‘Baby Mine’ from Disney’s Dumbo to close an epic rock show, yet here it is complete with a cute cameo from Corgan’s toddler son. 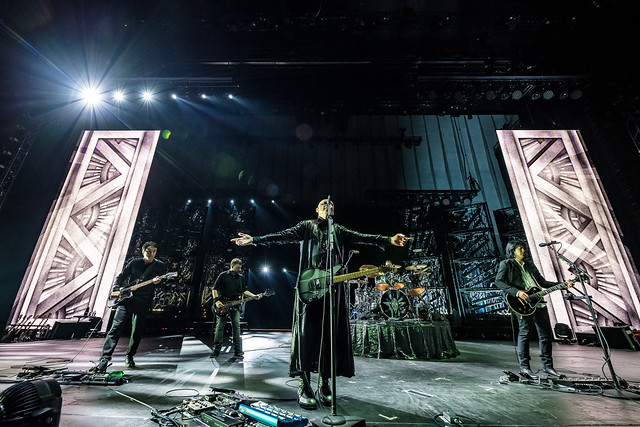 Visually this is a sumptuous experience, leaning into a twisted art-nouveau with specially recorded vignettes that range from the playful (Sugar Ray’s Mark McGrath hamming it up as a vaudeville announcer to cue Iha’s ‘Blew Away’) to the genuinely beautiful (a powerful ballet performance to accompany ‘For Martha’.) Special mention should go to the bewitching video collages by long-term Corgan collaborator Linda Strawberry and tarot-inspired animations and artwork by artist Katelan Foisey. It all folds into a theatrical and immersive experience rarely seen from this type of tour.

If this all seems breathlessly excited, it’s because the enthusiasm begins on the stage and spreads out from there. Corgan, whose sense of humour tends to go unappreciated, has rarely looked so relaxed and so playful; and having James Iha back in Smashing Pumpkins is just a joy. The two tease each other as only people with a long-established relationship can, and you certainly can’t picture any of the various part-time Pumpkins of the last ten years ribbing Corgan, or the audience, like Iha does. There’s a very distinct feeling everyone on stage is having a whale of a time, enjoying performing these magnificent songs to enthusiastic audiences.

Not all Smashing Pumpkins fans are going to go away happy, however; although if you’ve ever engaged with the hardcore fandom of any band – especially this one – you’ll know they’re rarely happy about anything anyway. Even so, Pumpkins shows have never been quite this ‘Shiny And Oh So Bright” before, and those fans who come for the 45-minute jams and ground-up reworkings may feel a little short-changed, as will those hoping to hear the new material. While the epic pop masterclasses like ‘Tonight Tonight’ and ‘1979’’ and the naked emotion of ‘Mayonaise’ are well represented here, the super-heavy songs don’t quite have the impact they might, and you wonder if this lineup could inject the necessary fury into, say ‘XYU’ or ‘Heavy Metal Machine’.

Fans that have stood by Corgan may also feel neglected by a setlist that draws a line at the band’s first split in 2000, discarding some of the excellent work he’s done under the Smashing Pumpkins name since. Finally, the absent D’arcy Wretsky will always be an elephant in the room. Without her, the chemistry between the players feels incomplete, though it’s probably wishful thinking that, 20 years on, the quartet’s almost-psychic musical connection could be re-established.

Still, this is a celebration of a band, a celebration of songs, and a celebration of an era, delivered without a sense of going-through-the-motions nostalgia or a weary treading of old ground, and that is a rare thing indeed in a reunion show. Whether Corgan can harness the momentum and focus it on moving the Pumpkins juggernaut forward remains to be seen, but in the meantime, this is a gorgeous production and a sumptuous reminder of a unique career.