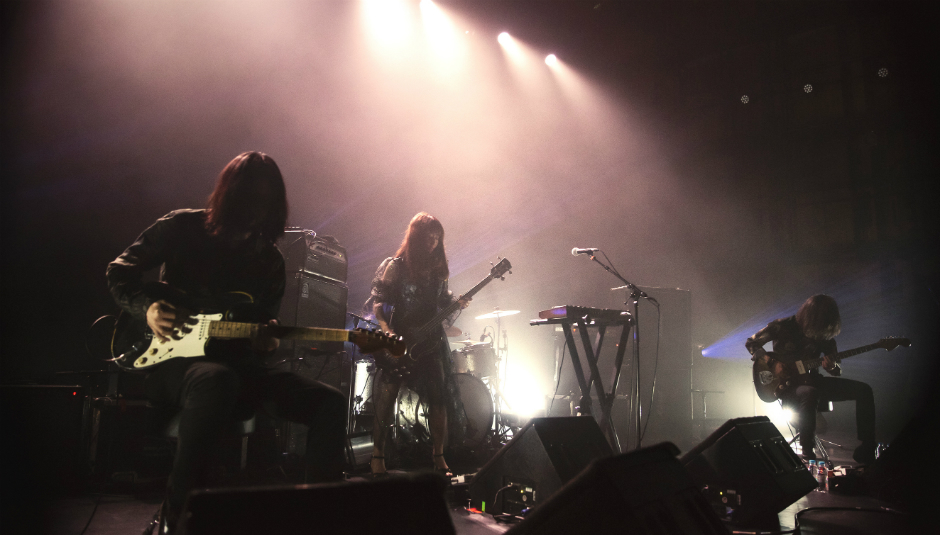 I’ve just emerged, head fuzzed and barely able to see straight, from what I consider to be (and I’ve given this some considerable thought) the sheer loudest, in terms of volume, gig I’ve been to in its life. MONO, longstanding Japanese post-rock titans – monoliths, behemoths, whichever word is your favourite descriptor – have reputation and form in this regard, but it still comes as something of a surprise that the ear-plugs worn tonight (a concession to encroaching old age) protected only to the extent of “Blimey, this is loud.” This is another stop on the magical mystery tour that is Robert Smith’s Meltdown and, in the austere and acoustically glorious surroundings of Queen Elizabeth Hall, the sense is that we are set for something symphonic.

The first meaningful moments of the evening came from Jo Quail, a cellist (of the electric variety, she played a splendid looking beast of an instrument) and loop artist whose four pieces, are taken from previous albums, including ‘Five Incantations’. Her performance is mesmerising, as every possible ounce of creative potential is extracted from the cello, both in terms of melodic drama and viciously distorted cacophonies of volume. All too soon, her half-hour set came to an end, but not without seeking a name for a piece from her new album, out in November this year. I would bashfully supply Scatter-Gunned March of Progress for entry into the melting pot. Rarely has a “new to these ears” artist caused me to wish to hear everything they’ve ever produced and never miss anything ever again, but Jo Quail is that good. She is touring with MONO when they return to these shores in the autumn; get there early.

And so it is with musical appetites suitably whetted and at least partially already sated that the QEH welcomes MONO. On a night when the band are competing with Nine Inch Nails for attention, as well as depriving The Joy Formidable of it, it’s great to see the hall so full and sat to rapt, concentrated attention. To say they tear through their set would seem strange to those who know and love them, but tonight, the band are certainly not messing around. Selections from various records in their burgeoning discography are aired, with particular, unsurprising emphasis on Requiem For Hell. 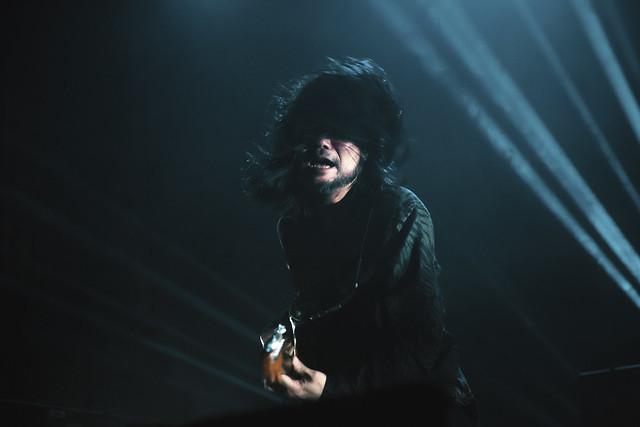 Taking notes periodically throughout, I find writing and re-writing “fairly gentle beginning, builds gradually before exploding mercilessly” or similar for each and every song. This, perhaps, is their greatest strength and also potentially a weakness they’ve yet to truly face down. If you are seeking to be gradually and remorselessly pummelled into submission by delirium-inducing distorted outro’s, one after another, MONO are your band. Their compositions are subtle and melodically extremely interesting, particularly when bassist (and vocalist on one track) Tamaki Kunishi moves to the piano and sprinkles gold dust over the songs.

What they lack, however, is true diversity. Of the eight tracks played tonight, what truly differentiates one from another is that each song’s crescendo, tension, and release is louder, more intense, and more satisfying than the last. It seems churlish to point this out as perhaps a criticism, but after an hour and a half, the novelty for this first-time viewer of MONO’s live show had worn off somewhat. However, no one else in the crowd offering a standing ovation seemed to care. A good gig, for sure, but one made better as an evening by the glory of the support act and one that leaves me wondering, as MONO enter their 20th year, where next compositionally and creatively for them?

Down With The Kings: DiS Meets Run-DMC