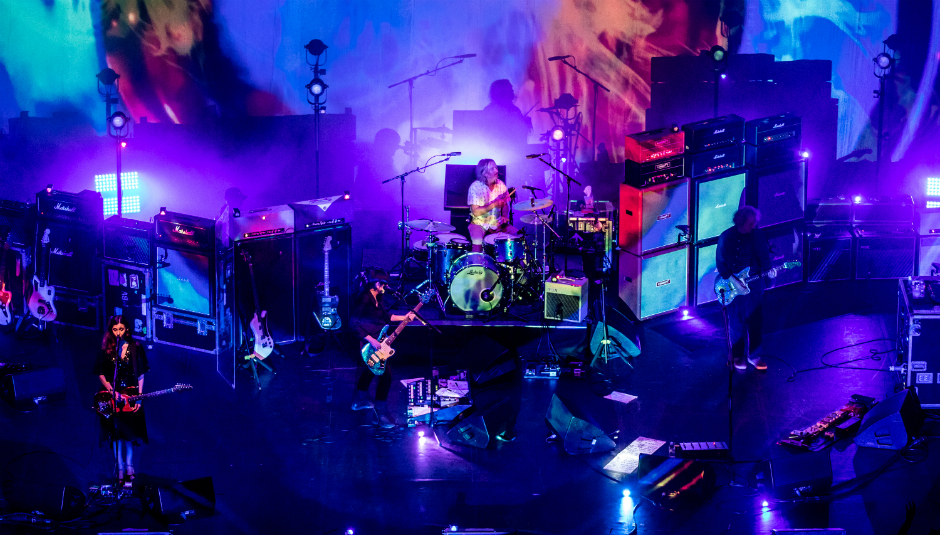 The words ‘a new record by My Bloody Valentine’ have taken on something of an immortal status ever since the band put out an EP of the same name over three decades ago. So talk of a new EP and album mooted for sometime later this year understandably brings with it a wave of anticipation. And so it should, for the last time the band hinted at something similar nearly five-and-a-half years ago, it was preceded by an announcement the album would be released at midnight one cold Saturday in February.

So when four songs into tonight's set, an unfamiliar squall of garage infused punk rock gives way to many puzzled looks followed by shrieks of excitement it's no wonder the majority of the Southbank Centre's Festival Hall immediately rise to their feet. As with their show in Brixton that preceded m b v's release by a week, Kevin Shields and co unleash a new song. While that shouldn't come as too much of a surprise, its sound and structure most definitely will. Standing out from the rest of the set like a proverbial sore thumb, the new number - written on the setlist as simply 'New Song 1' - could quite easily have sat on the aforementioned The New Record By My Bloody Valentine EP. Or indeed any of their pre-Creation Records material. Harking back to the band's primitive garage roots, it's reminiscent of The Stooges. Or Hawkwind. Or Psychocandy. Or 'Sylvie's Head' off the 'Sunny Sundae Smile' 12-inch single. What and whenever its origins are, it sets the scene for the next hour or so, not least inviting the question of whether they'll play any more new songs this evening (they don't).

Their invitation from Robert Smith to play the penultimate night of what's been an incredible Meltdown festival shouldn't be that perplexing. As with many of the bands on this bill, My Bloody Valentine - like The Cure - have ploughed their own path from day one. Even during their earliest phase when not many people took them seriously, their continual quest at striving for excellence may have taken the majority of the 1980s but that perseverance has led them to where they are today; arguably the most influential, not to mention respected, guitar band of their generation, and undoubtedly responsible for changing the face of music thanks to Loveless, a record still considered the most groundbreaking of its kind since The Beatles unleashed The White Album nearly a quarter of a century earlier.

Having played a warm-up show in Birmingham the previous night that was billed as an open rehearsal where press and photographers were not invited, reports from those in attendance suggested it was an evening marred by technical issues. However, here in the salubrious confines of the Southbank, there would be no sonic dilemmas (other than one false start where the intro is fluffed to 'Only Shallow'). Instead, the sound is pitch perfect throughout their near two hour long set, as it had been before for openers The Soft Moon, a band whose elegant fusion of post-punk, cold wave and industrial synth-pop should see them headline venues of this magnitude themselves before long.

Saying very little in the way of words throughout, the opening salvo of 'If I Said' into 'When You Sleep' then 'New You' is as pristine an introduction as you're likely to hear all year. All delivered with an impeccable level of guile and panache highlighting just why this band have and continue to be held in such high esteem for over thirty years. Standing far right and far left of the stage respectively, both Kevin Shields and Bilinda Butcher rarely exchange glances never mind words, communicating only through the music they make so beautifully. Behind them, Debbie Googe's now customary and unique bass playing style cuts a distinctive figure while Colm O'Ciosoig pounds away on his kit, leaving the drum stool only once for the four-guitar onslaught of 'Wonder 2' during the final third of the set.

Unofficial "fifth member" Jen Macro also plays a more prominent role this evening, particularly during 'Only Shallow' and 'Soon', which would have taken the roof off the Southbank were it not so ineffaceable, such is its stimulating presence. What's most satisfying, and probably a testament to the timeless nature these songs hold, is how early EP tracks 'Cigarette In Your Bed', 'Slow' and 'Honey Power' still sound relevant and vital, once again emphasizing just what a special band My Bloody Valentine are in being able to tuck such gems away as B-sides.

As with all My Bloody Valentine shows since the band found their sound many moons ago, the set ends on 'You Made Me Realise' complete with the white noise-infused "holocaust" segment, although shortened to a mere ten minutes this evening due to the Southbank's strict curfew. Nevertheless, it's a spellbinding way to bring day nine of Meltdown to a tumultuous close. Needless to say, if tonight marks the beginning of another chapter in My Bloody Valentine's distinguished history, and with a possible new musical direction to look forward to as well, we're all ears.