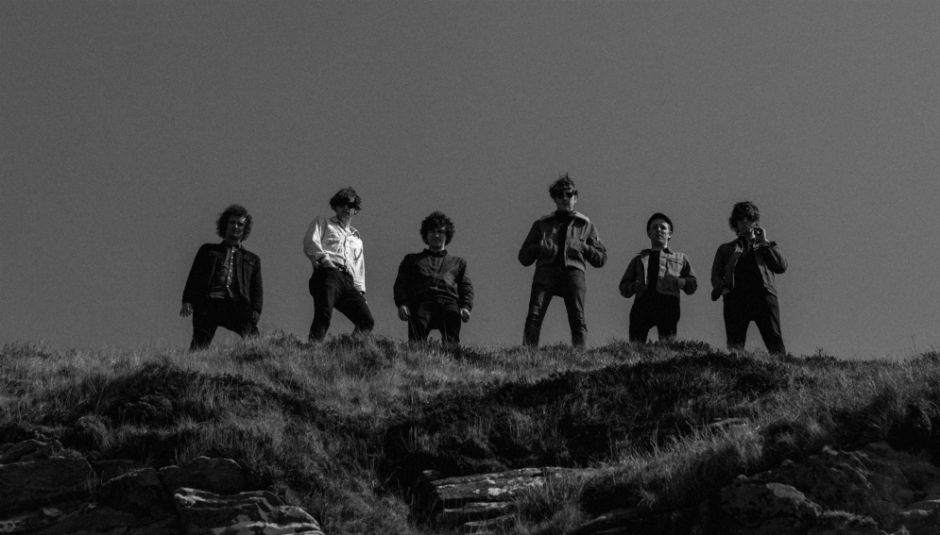 If one band were living proof that location is less important than ever for a band, it’s Neon Waltz. That the band are from a small town (Wick, in the far north-east of Scotland) wouldn’t be so remarkable if they hadn’t amassed a devoted following of fans all over the world, including a Japanese superfan from Tokyo and increasing interest from across the pond. Clearly, they’re doing something right.

They certainly look like a classic indie band, with singer Jordan Shearer recently rocking a bowl-cut fringe to rival Tim Burgess. But it’s the music, of course, that sets them apart from the nation’s legion of young men committed to 90s revivalism. Neon Waltz carry a sadness with their swagger, and a joy with their melancholy. Their songs, not least on debut album Strange Hymns, strike that balance between anthemic and thoughtful that sets them apart from the majority of their peers.

Now they’ve got support dates lined up with Noel Gallagher, suddenly anything looks possible. We caught up with the band to find out which corner of the earth they’re looking to take over next.

DiS: It’s been ten months now since your debut album was released. Were you happy with how it was received?

The response was amazing. We knew that by taking our time to get it right we were in danger of people losing interest, but it wasn’t like that at all. It made it all worthwhile in the end, especially getting to tour the album and meet the fans spending their hard-earned cash on vinyl, CDs, downloads, and gig tickets that allow us to keep doing this for a living.

How’s the second record coming along? Should fans expect much of a departure from Strange Hymns?

We’re halfway there with the second album. We released an EP in February which included the last single off Strange Hymns, called ‘Bring Me to Light’, and 3 new songs that are a bit different in their structure to most of the Strange Hymns collection; they maybe have a bit more urgency. For the second album, it’s going to be different. You’ll still hear Neon Waltz, but to us it needs to progress, and at the same time carry the same level of excitement as we felt writing and recording for the first album.

You’ve said previously that all of you contribute to songwriting. Is there a democratic process to refine those various contributions into one record?

It’s usually very democratic: someone comes with an idea, we jam it out and take rough recordings (which could be 15 minutes long), and we then sit and discuss what we like and don’t like. The problems arise with six of us being in the band, so a lot of the time a discussion ends in three versus three, cigarette breaks, pub breaks, then we put that particular song to the side and start a new one. Usually in a few days we’ll get back and listen to the song, and we can all agree what it needs without too much of a power struggle.

Last time we heard from you, there still seemed to be a question mark hanging over whether you’d leave Wick – has that happened, or is it still on the cards?

Nah, we’re still here, and will be for the next while. I’m sure that in some ways it would be beneficial to move away to say, Glasgow, to be surrounded by other bands, but we’ve got it too good here at the moment – our own place to practice in, and if we get bored of that we sometimes use a castle!

Do you think occupying that more isolated landscape shaped who you’ve become as a band?

Definitely. You don’t necessarily work with musicians who are totally into your type of music but it’s the best musicians available, ones that are fun to be around, and ones you could spend six weeks away on tour with! All this moulds the sound of our band.

Almost every year there’s a slew of articles declaring the death (or rebirth) of guitar music. Have you ever given much thought to that kind of cultural context?

Not really, apart from that the circles (death then rebirth) are getting closer together which is tiring to read. I always find it pretty cringe when a new band declares that they are the ones to bring it back. Just focus on being creative, try and do your own thing – which should be writing music that you get excited about and enjoy sharing – and if this music reaches out and affects people’s lives, then you’re doing alright, whether it has a guitar on it or not.

Are you excited about new music today?

There’s a lot out there to discover so it definitely excites me as much as ever. We’re constantly finding something that will soundtrack our year. This year is going to be a Young Fathers year for us… I can see it already!

You’ve got some massive gigs coming up this summer. What’s the ambition? Stadium headliners?

The primary ambition will always be the same for us – to make music that is both brilliant and true to us. I’d be lying if I said we didn’t want to play stadiums, but only if the music isn’t compromised.