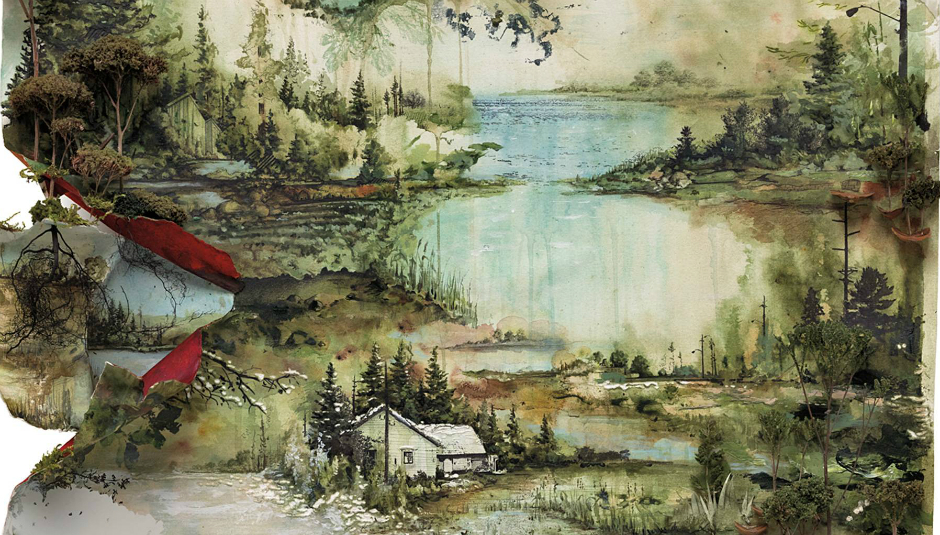 Back in 2011, the anticipation leading up to the release of Bon Iver’s eponymous second album was palpable. How would he follow For Emma, Forever Ago, a captivating, beautiful record so quintessential in the singer-songwriter-with-his-guitar-making-an-album-in-a-cabin-in-the- woods-after-a-period-of-heartbreak field? Thousands of fans across the world, waiting for what could possibly follow an album so perfect in its ethereal rawness and vulnerability. I was one.

The album was released to the kind of fanfare that I imagine Justin Vernon was already becoming slightly uncomfortable with. His rise was meteoric, off the back of a debut that wasn’t planned in the way many modern releases are, and which hadn’t been certain to make it out of Wisconsin before Jagjaguwar picked it up. The weight of expectation was huge. As I listened for the first time, silent wonder gave way to a sense of relief that what had been made was not just very special, but something more; even in those first few listens, a new favourite album had been born.

Music fans like to feel that they know something of the artists they love, something beyond the music. What is it about this person that helps them create the music I like? Vernon immediately came across as an intriguing character. Who was he really? On For Emma, we’d been invited into a world of retreat and isolation from a set of difficult experiences, which saw him head back home to Wisconsin and cut himself off from the world. You could sense the fragility that he felt, and this was apparent not just in the lyrics and musical rawness, but his falsetto vocal delivery. It’s a vocal style used by many (and is particularly prevalent in popular music today), but it drew me into listening even more intently and emphasized the fragile vulnerability with which he was presenting his songs.

The main thought I had prior to Bon Iver, Bon Iver’s release was how he would develop his overall sound. Musicians like to develop their ideas and output, and no one (hopefully) wants to keep on churning out the same stuff again and again. But For Emma was already iconic – quite a feat for a first album. How would this long-anticipated second album sound?

On the first few listens, I was struck by the clean, warm clarity of the sound. Of course, the falsetto was there, as were the banks of double-tracked backing vocals. But there was such great scope to this record – layer upon layer of instruments and vocals, creating thick, rich textures to each song, with a wider dynamic range and an overall sense of expansiveness and a desire to push musical boundaries further. There were moments of drama and intensity, which you knew would sound incredible in a live setting, even as you listened in your bedroom; the drop after a minute of ‘Perth’; the build in ‘Calgary’; and, of course, the tumultuous finish to the album with ‘Beth/Rest’. It was profoundly different to For Emma, but it was still real and genuine. The vulnerability was still there, although perhaps less pronounced, hidden behind more layers of music and texture. It was one of those albums that made you feel.

Something that has always been intriguing about Vernon is what he is actually saying in his lyrics. Sometimes it’s clear, yet often it’s hard to know what he’s talking about. I find this an endearing quality, adding a further level of mystique. Many would assume that this contributes to creating difficulty in connecting with his audience, and perhaps for some, this was initially the case. However, dedicated fans often take their fandom to greater levels than just listening – searching for lyrics online for instance. It’s hard to sing along if you don’t know the words. Yet, this is not a barrier to people becoming even greater fans of Bon Iver. People are very accepting of who Vernon is, and the tortured soul – for want of a better phrase – that comes across in his music (and during his shows) is very much a part of who he is, informing the music that he creates. This doesn’t just create sympathy and compassion for him as a person, but an ever greater joy and delight in his music for its honesty, genuineness, and ability to open up the souls of his listeners, whilst bearing open his own.

The release of Bon Iver, Bon Iver came at an interesting moment in my life. For a variety of reasons, I had not been writing much of my own music for a number of years since leaving university. But it was at the turn of 2012, when this album was released, that I began to think more about how I was going to move forward as a musician. Later that year, I got married. My wife and I chose to walk out as newlyweds to ‘Holocene’; there is a hopefulness in the sound of the song – still a little melancholic, but a sense of moving forward. For us, we were able to stand behind the chorus lyric “At once I knew / I was not magnificent” in terms of two people bringing the best – and the worst – of each other to create a special union that would be stronger together. By doing so, we could share a positivity and optimism for the future. Indeed, we “could see for miles, miles, miles”.

Vernon is someone for whom we should be thankful that his music found its way to our ears. Making music is his way of making sense of the world, yet sharing it with people creates all sorts of dilemmas. I hope he makes many more beautiful albums and continues to present them to us in a live setting, but if he doesn’t, he has already created three exquisite pieces of work for which we should be very grateful indeed.

Pianist and composer Simeon Walker self releases his debut album Mono on 24 November. To pre-order the album, and to hear the first two singles, please click here. For more information about Walker and his music, please visit his official website.

"It didn't come naturally to me to wr...