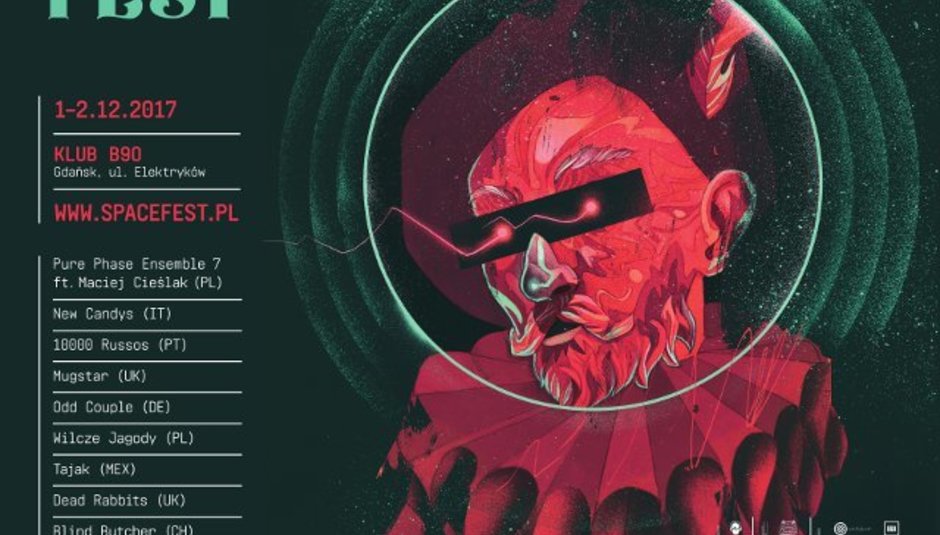 DiS is proud to announce that we'll be one of the media partners for SpaceFest! this year.

Taking place at Klub B90 in the Polish city of Gdansk on Friday 1 and Saturday 2 December, SpaceFest! artistic director Anna Szynwelska describes it as "a festival of psychedelia celebrating guitar distortions, noise drones, and all other weird sounds created under the influence of mysterious energy from space."

The 2017 edition represents the seventh since its inaugural event back in 2011. SpaceFest! is a truly international affair featuring eleven acts from around the globe over its two days including the highly revered Pure Phase Ensemble which was created especially for this festival. An ever-changing line-up of musicians that has seen Ride's Mark Gardener, Stereolab's Laetitia Sadier, and Anton Newcombe from The Brian Jonestown Massacre curate at past events, this year's ensemble has been put together by Maciej Cieślak of Polish psychedelic outfit Ścianka, their largely improvised set having only been rehearsed over the five days prior to the festival at the city's Laznia 2 Centre For Contemporary Art.

As with previous Pure Phase Ensemble performances at SpaceFest!, the show will be recorded and released on CD in the early part of 2018.

Weekend and day tickets are still available for the festival priced at 75 and 40 Polish Zloty (approximately £16 and £9 respectively) if purchased in advance, or 45 Polish Zloty per day on the day.

In the meantime, here's our guide to who's playing and when...

This Italian outfit have long been favourites of Drowned In Sound's Some Velvet Mixtape column. Hailing from Venice, they put out third long player Bleeding Magenta earlier this year and their brooding, reverb-drenched psychedelia is sure to be a winner at SpaceFest!

10,000 Russos fuse all variants of the psychedelic spectrum under one umbrella to create a unique sound all of their own. Based in Porto, they've been creating a storm on the psych rock scene since releasing their self-titled debut three years ago and long-awaited follow-up Distress Distress caused a similar stir when it came out in April.

Polish trio Wilcze Jagody will be a new name to many having only put out their first EP this summer. Brought together by a shared love of 80s synth pop and shoegaze, their dreamy soundscapes provide a subtle diversion from SpaceFest!'s heavier moments.

One of two UK acts on this year's line-up, Southampton based five-piece Dead Rabbits have been archetypal members of the burgeoning psych scene for a while now, having initially signed to highly respected label Fuzz Club back in 2013. Third album Everything Is A Lie came out last year and is arguably their finest collection to date.

Described as "an abstract duo that will give us a stage explosion of space rock, glam rock, glitter, lycra and sequins", Switzerland's Blind Butcher are something of an anomaly among the rest of SpaceFest!'s line-up. Originally from the town of Lucerne, they've released two albums thus far, the latest of which ALAWALAWA has been compared to Sigur Ros, Devo, and Can. Blimey.

An ephemeral collective of internationally based musicians that was put together for the first edition of Spacefest! Pure Phase Ensemble has gone on to be the centre point of the festival and for the seventh edition, Polish musician Maciej Cieślak has curated a line-up featuring fellow countrymen Michał Gos on drums and Karol Schwarz on bass alongside a host of surprise guests. The plan is to rehearse for five days at the Łaźnia 2 Centre for Contemporary Art then perform in front of an eager Spacefest! audience on the Saturday evening. If it's anything like last year's Ensemble featuring Anton Newcombe, this will be one hell of a spectacle.

About to celebrate their fifteenth year of existence, Liverpool's Mugstar fuse influences from the first wave (aka The Golden Age Of...) of psychedelia with noisier elements proffered from a love of bands like Sonic Youth and the Butthole Surfers. Their most recent album Magnetic Seasons came out last year and is sprawling magnificence represents their most ambitious set of recordings to date.

Berlin duo Odd Couple aren't like your average two-piece garage rock combo. Instead, this pair of multi-instrumentalists make an unholy racket that's somewhere between the aural sledgehammer of stoner metal and motorik nuance of Neu!

Sonic annihilators originating from the Baja California Peninsula of Mexico. Their music has been described as an apocalypse in the shape of sound and while yours truly is yet to see them live, such a descriptive makes them a mouth-watering prospect indeed. Despite only forming three years ago, they've already put out two albums (Amsterdam 211 and Tajak) both of which we'd recommend you check out.

Hailing from the city of Kolobrzeg, 30 kilo słońca are another up and coming Polish band who've been making waves outside of their homeland in recent months. The trio's fusion of largely improvised space rock and freeform jazz make them another of SpaceFest!'s more innovative acts, and one that should not be missed on Saturday evening.

Closing SpaceFest! will be DJ Dr. Switchoff, whose combination of eclectic music and mind-blowing visuals have traditionally brought the festival to an end in previous years.

Doors open both nights at 7pm.