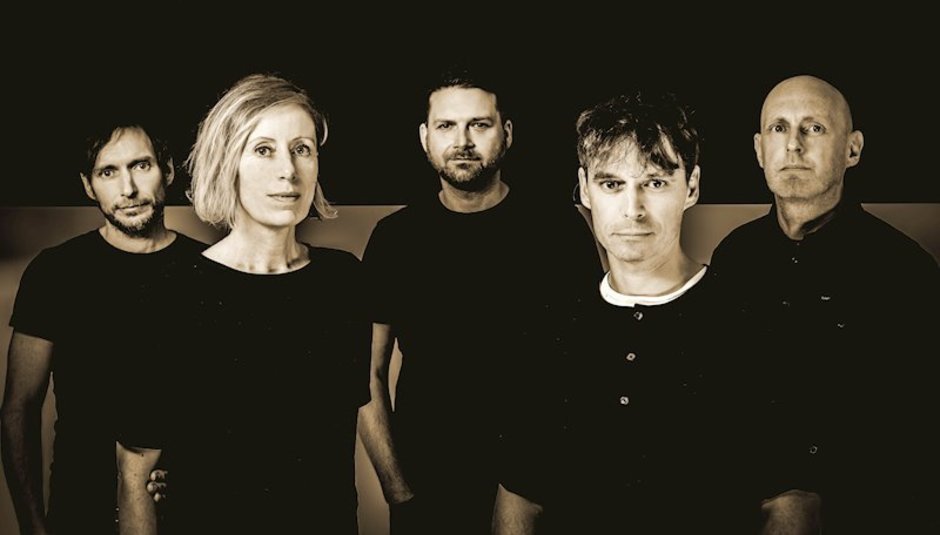 Bristol's Secret Shine remain one of the last surviving bands from the Sarah Records era, having put out their first EP on the label After Years back in 1991. Still active after an eight-year hiatus between 1996 and 2004, the five-piece release their fourth long player There is Only Now next month on Saint Marie Records.

Here, Scott Purnell and Jamie Gingell from the band take DiS through each of the ten tracks that make up the album.

This song was probably the most unpolished idea we took with us to the studio in France where we recorded the album. I started this in Garageband and it only ever really was half a song so I remember Jamie adding bits on his iPad on the plane over. It grew into this lovely breezy, pop-infused, mulit-layered song and was one of my favourites to hear develop in the studio. Each vocal layer made the song stronger and stronger and therefore a nice song to kick off the record before we entered into bleaker territory.

All In Your Head

This was one of the first songs written for the album. It was also one of the first we recorded in the studio. We'd been talking about writing some music that was a little more suited to film scoring, and the chorus from this song started life that way. That's the primary reason for its epic sound. We like to play with contrasts in our music and this song seemed well suited to that approach, with fairly minimal verses leading into probably the some of the loudest passages on the album. There are a lot bigger super saw and string sounds in this song than we usually use, but it seemed appropriate in this case and was needed to get the wall of sound we were looking for in the production.

'Dirty Game' is about the messy side of relationships, and how some people get a kick out of the power play that can occur. For that reason, we wanted the production to be slightly darker than some of the other tracks. It was one of the easiest songs to write on the album and came together pretty quickly. It also turned out to be one of the easiest to mix. We currently use it as the first song in a live set because it’s so solid and has a strong vocal element. Both this song and 'All In Your Head' where sketched out using GarageBand on iPad. It’s surprisingly easy way to lay out a song quickly, and allows you to concentrate on another day rather than 1000 different synths or plug-ins.

This has become an inter-band fav and a mainstay of our live set. I have a tendency to write songs in 3/4 tempo. This came from my love of the music of the Cocteau Twins who often used this time signature and later embraced by Lush and more recently Doves. It was also inspired by my adoration of The Cure’s Disintegration with those big synth sounds and rhythmic bass line. Jamie added a noisy finale to this song which wasn’t on my original demo. We’ve worked like this before - combining two very different ideas to make one song.

'To The Well' is probably the darkest track on the album. It’s probably the harshest and least shoegaze song as well. The idea for the lyrics came from various horror films and were meant to convey a sense of isolation and of fleeing from something. We thought it was one of the less interesting songs on the album during the recording sessions, but it’s become a really strong song for us live and audiences really seem to like it, maybe because is quite a robust song and has loads of energy and doesn’t lag too much. There is also quite a distinctive bell sound on the synth which runs through the song which adds tension to the sound and is a good counterpart to the wall of guitars which come in during heavy sections.

This song was actually a melody I rehashed from something that was going on in the background of the TV programme Peaky Blinders. The song had the working title 'Peaky Blinders' for ages so I'm still not quite used to it being called 'For You' I’ve never watched the programme but it was on in the room when I was fiddling around on my guitar and I subconciously picked up this chord sequence that was acutally quite moody and low key. I then added a huge hammond organ sound over the top and the song took shape. We struggled a little to get the song to work vocally for quite a while as I kind of wrote it as an instrumental piece but as usual Jamie found away to unlock it and it's become one of my personal favs on the album.

Another one of my 3/4 time signature specials. This song has a swagger and confidence about it but I'm not convinced we quite got the production and mix right so it doesn't fly as much as my original Garageband demo even. I'm still fond of it - a simple litte song with a catch guitar lead line - possibly sounds more 90's than any of the other song on the album! I like what Jamie did with the overlapping vocal harmonies.

This seems to be a fan favourite from the album. It's got a catchy lead line that starts the song and hooks the listener straight in, which isn't something we always do. It's probably one of the more commercial tracks on the album as well. The lead line actually started life as a lead synth, but was converted at a later stage to the guitar. This happens quite often when I write the song since I'm not a guitarist and use the synth as a replacement. Like many of the tracks on this album, it began life on the iPad as a sketch idea using GarageBand. The vocal melody came easily on this song and was written in about 20 minutes, which is pretty unusual for us, so that aspect was easy, but the song did run into some issues during the recording and the band got the stage where we didn’t really know what to do with it. Most of the editing magic to bring it back to life happened during the mix.

We took out a whole section of this song in the final mix and raised the tempo as it worked better over 3 mins. One day I'd love to put the other section back in. Maybe we can put this on our 40th Anniversary box set...

When this was first written, it was touch and go whether it would get picked for the album. In its demo form, it was a bit too disco for some of us and so it was a close thing whether another track would make it to the recording stages. It's definitely the most pop orientated song on the album from our perspective but it's great fun to play live. We debuted it in Madrid some time ago at a pop fest soon after the album had been recorded, and the crowd really seemed to like it. It's nice to throw a track or two into the mix that sound a little different from the others and this one definitely fits that criteria.

I’m more pleased with this song being on the album than any other even if it's not the most catchy. It has a gentle murmuring melody building into a crescendo at the end of the song with stabbing drums and piercing lead guitar - it's a pleasure to play live, although I think we've only played this once as I write this. The song originated from a song my brother wrote for a former band we were both in called Junkie, it's original moniker being 'House on the Hill'. I loved this song at the time but it had become dated and not a Shine song so I re-purposed Dean's chords and Jamie re-wrote the words. It's a fitting song to end the record.

There Is Only Now is out 15 December via Saint Marie Records. For more information on Secret Shine visit their Facebook and Bandcamp pages.