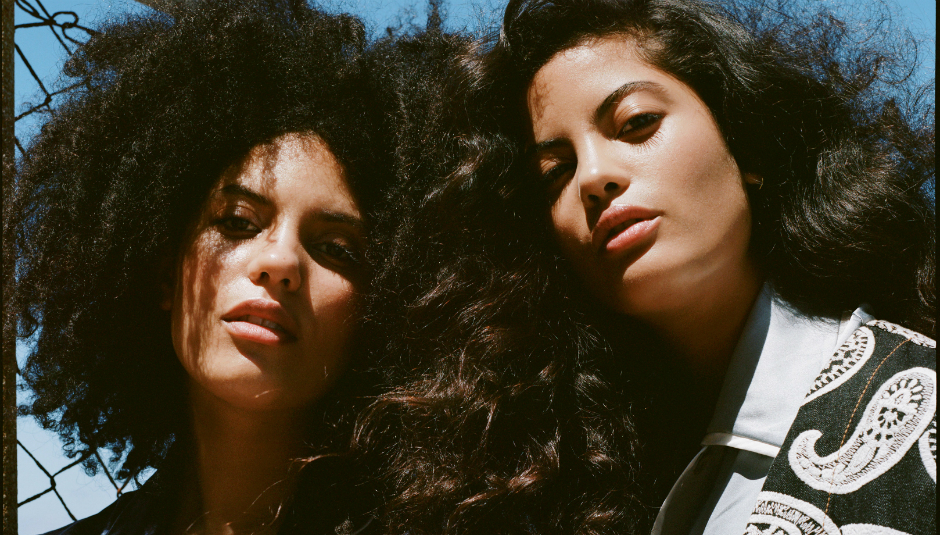 "Art doesn’t ask you who you are in order to touch you": DiS Meets Ibeyi

"Art doesn’t ask you who you are in order to touch you": DiS Meets Ibeyi

Ibeyi are prepping for a two-year-long tour of our planet, bringing new album Ash to the audience it deserves. It’s a hopeful, defiant, bold record, teeming with the wisdom and confidence of the twin sisters Lisa-Kaindé and Naomi Diaz.

As they play one of three preliminary UK dates at Manchester’s eclectic Band On The Wall venue, we catch up with them to discuss the new political atmosphere that their album documents, the power that we all have to make a difference, and the recent sexual harassment scandals.

DiS: The collision of different languages and cultures is such a part of your identity, and I get the impression that you hate things being categorised. I’m a music journalist and you make my life hard – you don’t belong to any one genre.

Lisa-Kaindé: Great! That’s because categorisation limits you. The whole point of being a musician is getting to search yourself and to discover who you are in different genres. It’s exciting for us. You might say we just do soul music, but then if I try to explore pop music, I might find a part of myself there too. There’s a part of Ibeyi in every genre of music – even hardcore rock, there could be part of Ibeyi there.

Lisa-Kaindé: Different people! Our audiences are amazing. All around the world, they are really different, and that’s something we love. But they all react to the same rhythms and the same melodies. That’s the magic of culture – art doesn’t ask you who you are in order to touch you. It’ll touch you or not, but it doesn’t discriminate. It won’t decide not to touch you because it doesn’t like your face.

How much of this is to do with the fact that you’ve grown up both French and Cuban, experiencing both cultures? And your mum is half Venezuelan.

Lisa-Kaindé: It has everything to do with that.

Lisa-Kaindé: Since the start, we were a mix. Our music is just a reflection of what we are and what we like. It always strikes me when I hear young kids who think that classical music is for rich, white people and rap is for me. No! You have classical music too, it’s yours. Our father was a genius, he was one of the best percussionists in the world, and he would have enjoyed an Eminem rap as much as a Coltrane song.

Naomi: Even Cardi B. I love Cardi B!

Lisa-Kaindé: He almost played for Celine Dion, and he was really excited about it. That’s why we are like that too. Our first CDs were Shakira and Anastasia.

Naomi: No, but Anastasia, she’s amazing.

Lisa-Kaindé: She is amazing. But he said we could have anything, and he would never tell us that we shouldn’t listen to anyone. He would never say, “Stop playing that shit.”

Your new album Ash is defined by hope. I wonder how you keep your hope alive when you turn on the news?

Lisa-Kaindé: We’re not negative people, but we became less positive when we started touring, turning on the news when we were away from home [The writing process coincided with the run-up to the 2017 French election, in which far-right candidate Marine Le Pen made it to the final two candidates]. We got to the point where we thought, “We’re not going to save the world, so fuck it, we’re all going to die.” And this is the opposite of what you should be thinking. And so we realised by doing something it changed everything. On the first day of recording, we did ‘Ash’ and ‘Away Away’, and it was like all of the energy we had lost came running back. When you give energy to something, you get it ten times back. We know an album isn’t going to change the world, yet it’s doing something. And then we started getting excited that when we performed, we would be making people sing things like, “We are deathless” and “No man is big enough for my arms.” And all of a sudden, you are not just singing it, you are believing it for three minutes for real.

You’re lucky that you have a way of expressing this. What can those of us without a global fanbase do to remain positive?

Lisa-Kaindé: Do something. Smile at someone you don’t know, help someone on the street. You will see that your day will change. Whether it’s giving an hour of your time somewhere, or helping your brothers or sisters, or teaching something to a friend just because you want to, or taking a child to a museum. If we were not touring, I would still be writing. I need it in my life. The thing is, we get discouraged before doing these things. We want to save the world as human beings, but it feels like it’s too much.

Naomi: You have to realise that you can’t do it by yourself.

Lisa-Kaindé: You can’t handle it. But start with the everyday, tiny things in life that you can change. Every day is a learning process. Making these songs made us feel better, and hopeful.

Lisa-Kaindé: You know, now being on stage in Paris is a political act, because of what happened at the Bataclan. Making art is political today. Our album is not political, the world has made it political.

Naomi: Because we are talking about things that are important now. But we don’t want to preach.

Lisa-Kaindé: Because we don’t have the answers. We are trying to figure it out, and it’s so hard. We talk about experiences of what we’ve seen.

The time since the album’s release has been dominated by the Weinstein story. Your song ‘No Man Is Big Enough For My Arms’ must feel more timely than you could ever have imagined.

Lisa-Kaindé: It’s insane. But that song could have come out ten years ago. I hope in ten years, it will not be accurate. I just finished one of James Baldwin’s books, and I was astonished that it could have been written yesterday. It terrorises me that mankind doesn’t learn from its mistakes.

What outrages me even more [in relation to Weinstein] is that everybody knew. When I thought about what happened to me in ‘Deathless’ [the song tells the story of an encounter Lisa-Kaindé had with a racist policeman in Paris when she was sixteen], what shocked me was not that the policeman was an ass, but that people around me didn’t move. I was one of those people once, we all were. We see things happening and we don’t move. That’s when we need to feel deathless and realise that we have power. Those women realise that now. We have power. We can talk. For so long, people didn’t say anything. It’s really important to start talking and to create a place where you can go to talk, and you know there will be consequences. I have loads of friends who have quit jobs because men were being inappropriate. These men only get scared when they fear being exposed. It also comes back to education – we need to educate our girls that they don’t need a man to be where they want to be.

Sometimes I pray for a bigger platform, so I can just set things on fire from it. What Eminem did just recently is incredible. It takes balls to do that. He knew he could lose fans, and everybody cares about the fans that took them to where they are, but him drawing that line is super powerful. There are some incredible human beings in this world.

Do you think the music industry has as big a problem as Hollywood does?

Naomi: Everywhere is the same.

Lisa-Kaindé: I’m sure there are guys like that in the music industry. What has shocked us is that some male artists that you meet don’t see you as an artist first, but as a woman. For me, that is always a little bit weird. It’s seduction, and we have to draw the line. Why do we always have to draw the line?

It’s this idea that everyone should be sexualized, too. And I always think, you don’t need to! I know that for some of them, that’s their essence, and in that case go for it. For example, I do believe that Rihanna is 100% who she appears to be. It’s important that women are allowed to be sexy on stage, and not shamed. But at the same time, when I look at the charts and all of those women being sexual in the same way, I think that’s weird. We all want to feel sensual, but not in the exact same way. So it also boils down to diversity. That’s another issue, when women think there can only be one at the top, and the others have to mime like that one at the top. The sooner we understand that the truth is not like that, and to be more like yourself, the better. You’re not just breaking down walls for yourself, but you’re breaking down walls for everybody. That’s what excites us.

Have either of you had thoughts about making music separately?

Naomi: No, not really.

Lisa-Kaindé: No, we are thinking about making other things separately though. For example, I’m thinking about making a photo exhibition about Naomi. I thought she was going to DJ on her own, and then I started learning and I actually enjoy it. The only problem is that it’s late at night, and I’m not sure how I’m going to cope with that.

Naomi: She sleeps at ten! You’re going to be tired.

Lisa-Kaindé: Now I understand the beauty of it. I used to think they weren’t working, but now I can see that they really understand songs like no-one else. The pitch, the tempo, everything. It’s a huge knowledge of music that I hope I have one day.

I usually ask about dream collaborations, but you already have a formidable list (Beyoncé, Kamasi Washington, Richard Russell, Chilly Gonzales).

Naomi: We want to work with a lot of people.

Lisa-Kaindé: And they’re really broad, from loads of different genres.

How did you meet Kamasi?

Lisa-Kaindé: At festivals. Festival curators saw a link between Kamasi and Ibeyi before we did, and they made us play one after the other over and over again. He asked us to do something for him first, and we did ‘Mountains Of Gold’ for Richard Russell’s Everything Is Recorded project. And we were thinking about ‘Deathless’ and we both said, “Kamasi!”

Ash is out now via XL Recordings. Read our 8/10 review of the album here. For more information about Ibeyi, including forthcoming tour dates, please visit their official website.

Farm Hand's Track By Track Guide to I...

A Slow Build Towards Overcoming: DiS ...