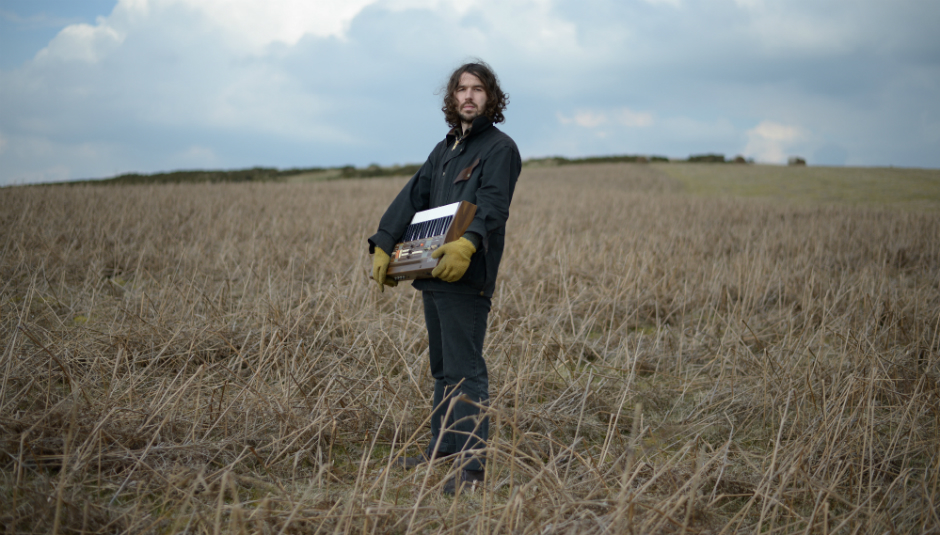 Mark sat down with us to talk through the ideas behind each track.

I wanted the introduction to the album to be a bit unsettling and a statement of intent for the rest of the listen. This started as a vocal loop I was using to start my live set with. Rob [Jones] has a horrible noisy circuit bent speak and spell that we put through some other pedals and embedded all of the noise underneath everything.

I'm not worried about doing historical reenactment when in comes to recording. I love the fact I get to record in 2017 and not 1971. I do have some 'vintage' (crap / old / broken) gear I got cheap on eBay or from car boot sales. However, I love using digital effects and using the full range of tools available to record efficiently. On this track we used a digital reel to reel to distort and add digital tape hiss. I enjoy putting digitally recorded stuff into analogue gear and vice-versa. The lyrics are simply ‘Precision, Solution’. I quite often repeat the phrase "precision, precision, be precise" to myself to remind myself to be more precise in my day to day decision making as I can be hugely vague and woolly. I also repeat the word "solution" to remind myself to find solutions to problems instead of just ignoring them. This song is a hybrid of those two inner monologues.

As with many of my current musical inventions, this started life as a ukulele riff. The reason for that is I can play the ukulele or my Spanish Guitar whilst looking after my little boy - these are the two instruments we have got hanging up on the wall in our living room. He doesn't seem to mind it when I play - he can get on with some lego or he can join in on drums. I transferred the riff to keys and then made up a melody and then took the keys away again so now you can't even hear the riff I am talking about. I wasn't expecting to play live drums on the album at all but Rob convinced me it would add a different dynamic and I'm glad I listened. I like the blend of the kit with the drum machine. The lyrics are about my continued desire (now in it's 34th year) and preparedness to play international football for Wales.

I got pretty over excited when we were recording this one. It just went off in such a different direction to what I was expecting - way more live and fun. I was thinking it'd be downbeat and despondent. Rob was really good at getting stuff out of me and making it sound how I wanted it to, even if I didn't know how I wanted it to sound yet! In terms of the meaning, I spent years working in special education and the children, many of whom had life-limiting conditions, were the bravest, kindest, funnest and phenomenally positive people you could possibly meet. This song is about their bravery and hope.

The story here is about someone who eats too much nettle soup and it turns them bitter and hateful as their mouth is full of sting. The only cure for this is walking the hills and some hill therapy and probably eating a lot of dock leaves. I enjoyed putting this one together and I'm 99% certain Rob re-recorded my synth bassline so it was in time whilst I was out tending to the sheep (we recorded it during lambing). I like the beat, it sounds nice and oaty.

I wanted to put some quite textural pieces of music in. This is lifted directly from a series of loops I made. I really liked how digitally distorted and weird it got when we pulled and pushed it around. The title is kind of about how young interesting people grow up and end up seduced and obsessed by getting new shiny kitchens and feel that a new kitchen will improve their life immeasurably. Now I'm writing it, it's probably a good outlook, I'm off to measure up.

This is the starting point of Farm Hand as it was the first thing I fleshed out into a full song. It is very much of a time and it feels like when we moved into our cold house in the hills surrounded by family, sheep, and new ways of living and being.

I want to give a shout out to my friend Steve (Sweet Baboo) here as he was really encouraging me getting this project started. He kept asking: "When are you going to record something?" He came up and we recorded some early versions of these tracks in spring 2016 and they would never have come to light without his enthusiasm, he absolutely loves making, recording and playing music. Rob and I resampled some of the sounds from that session so they are on the record.

This was one I created when I was doing a site-specific sound art project in a cave last year, as you do. It is about bats living perfectly happily in the darkness. I like that the words work for my life here in Radnorshire as well. It is so dark in the night time here.

I wasn't going to put this on but I love playing this one live and I thought I would bung it on the album. I ended up playing some messy guitar on this. It is about my over-reliance on 'Googling'*. Often, I tend to to Google search before thinking. Like: "How to cook a jacket potato" or "Has my child got a cold" and would prefer to go with the opinion of someone on Mumsnet writing from America than my own intuition.

*Other search engines are available (but are not as good).

I Hope She Knows

This uses the 'Pop Rhumba' beat on a hanging old Yamaha keyboard - not a cool one - the type you would find in a school music room. The lyrics are about the fact I am aware I am lucky as I have a very supportive wife who doesn't just accept me doing this nonsense, she has actively encouraged it and is involved creatively as well; she did the artwork and allows me to run weird ideas past her. Not everyone gets that lucky so I hope she knows that I value it all immensely.

For more information on Mark Daman Thomas and his work with Farm Hand and Islet visit his official website. Read our in-depth interview with Mark here.