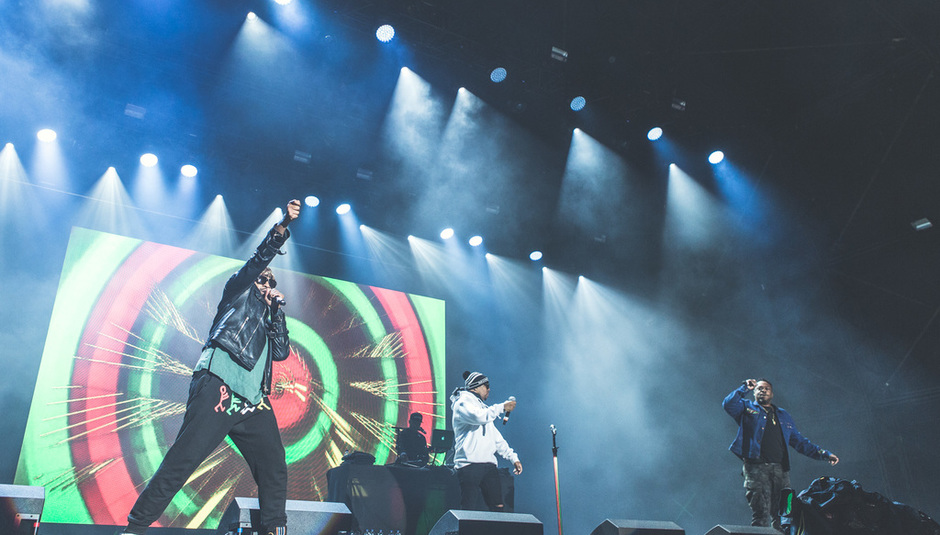 For the first time in its 13-year-tenure as the UK’s official end of summer shindig, Bestival has crossed the Solent from the Isle of Wight to the grandiose antiquity of Dorset’s Lulworth Estate. To celebrate the move, Rob and Josie Da Bank secured a booking which represents a coup of dizzying proportions: A Tribe Called Quest’s final show. Ever. For those who remained as the mud thickened, the rain fell and apocalyptic winds blew, this was yet another weekend exhibition to prove that the Da Bank pair are some of the best, and most diverse, curators of music in the business.

Bestival’s patch of the 20-mile Lulworth Estate, also home to Camp Bestival, has an eerie similarity to its former home at Robin Hill Park. Much of this uncanny likeness is of course a symptom of the stages that creative director Josie has been developing for years and have travelled with them. However, apart from the giant castle that towers at its epicentre, the space has such a similar quality to Robin Hill that by Saturday you could be forgiven for forgetting that you didn’t have to brave 5am ferries and hours’ worth of traffic in the congestion of the Isle of Wight.

What is more apparent is a superior use of space. The Lawn; a subdued area to feast from a cacophony of global cuisines, the Colour Field; home to the new-look Temple stage and Cuckoo Clump; which begins with the wooden frame of the JagerHaus and ends at the beaming nylon façade of Happy Kanye, in particular, all have a distinct space within the sprawling ground and are broken apart by the natural lay of the land and the castle.

Far more importantly, the sheer diversity of music on offer at Bestival has remained ever present. From the cold whisper of The xx to Mykki Blanco’s wild androgyny via Fat Man Scoop, Jamie T, L.A Salami and The Pet Shop Boys, to name but a paltry handful, the feast of heritage, burgeoning and staple acts that are on show are a testament to the acuity of Rob Da Bank’s chimerical ear.

At the crest of the weekend line up towers A Tribe Called Quest, who confirmed that they would be ending their 27-year-run at their Saturday headline show. Still grieving the loss of Phife Dawg, who died in 2016, and still riding the wave of last year’s seminal We Got It from Here… Thank You 4 Your Service, the incomparable collective that helped shape hip hop’s purple patch in the Nineties delivered a blistering farewell. Joined on the mic by Busta Rhymes, Q Tip sprung around the stage and off of it with fierce energy and charisma. The set was largely filled with tracks from the Tribe’s politically charged latest LP, as expected, which culminated in a deafening chant of "We the people, we are equal". Peppered throughout were classics ‘Check The Rhime’, ‘Buggin Out’, ‘Butter’ (sang acapella by the spectral voice of Phife from behind his giant LED visage at the back of the stage) and ‘Can I Kick It?’ which provided the best singalong opportunity of the evening.

The second major heritage act were Sunday headliners Pet Shop Boys. Neil Tennant and Chris Lowe strutted around the stage sporting outlandish metal helmets in what transpired to be a confident set filled with multiple costume changes, but lacking the barrage of classics from the get go that you might expect. Considering that the vast majority of attendees are in their 20s and may only know the hits, the set was a slightly bemusing affair. Starting off at a glacial pace, it percolated to it’s peak when they finally broke out into ‘West End Girls’, ‘It’s a Sin’ and some big covers; Happy Kanye and the castle beaming colour down on the field.

Another of the main stage’s outstanding highlights was the return of the UK rap innovator Dizzee Rascal, freshly invigorated from the success of his latest LP Raskit; a record that quite clearly sees him searching for his former self. The Saturday support set reflected this abandoning of EDM in favour of his early material. There were smatterings of his more successful pop-rap; 'Dance Wiv Me' and 'Bonkers', but he really stood out as he waded through tracks from Boy In Da Corner, arguably the most important urban UK album in history. The crowd responded in kind and the gargantuan crowd was one of the biggest of the entire weekend.

Elsewhere, in the Colour Field, Andy C celebrated 25 years of Ram records with a five-and-a-half-hour showcase at Temple which pounded long into the final night and David Rodigan hosted his Ram Jam at Bollywood, bouncing and screaming 'Give me some signal' with the energy of a man a third his age. Invaders of The Future, a space for up and comers, stepped up in quality with a Sunday Best Records showcase, a mesmerising 45 minutes from the outstanding Chelou, who started making serious waves last year, and the ferocity of Honeyblood’s grunge ballads which focus on scumbag exes and female empowerment.

Although the grim weather led to the main arena being closed for a number of hours on Sunday afternoon, Justice dropped out and the sloshing mud made even a small journey substantially difficult, it’s tricky to look at Bestival as anything other than a resounding success. Last year left much to be desired and although some of that resonated through to this year – Bollywood is still stripped of its entrance gate and much of the stage’s soul seems to have left with it – Rob and Josie Da Bank must be pleased that despite the rain, the party raged on and summer revellers’ thirst for one final hoorah has been sated.

photo of A Tribe Called Quest by Victor Fratowski

"Sharing music is the reason we all m...

On Music Snobbery &amp; The Perceived...