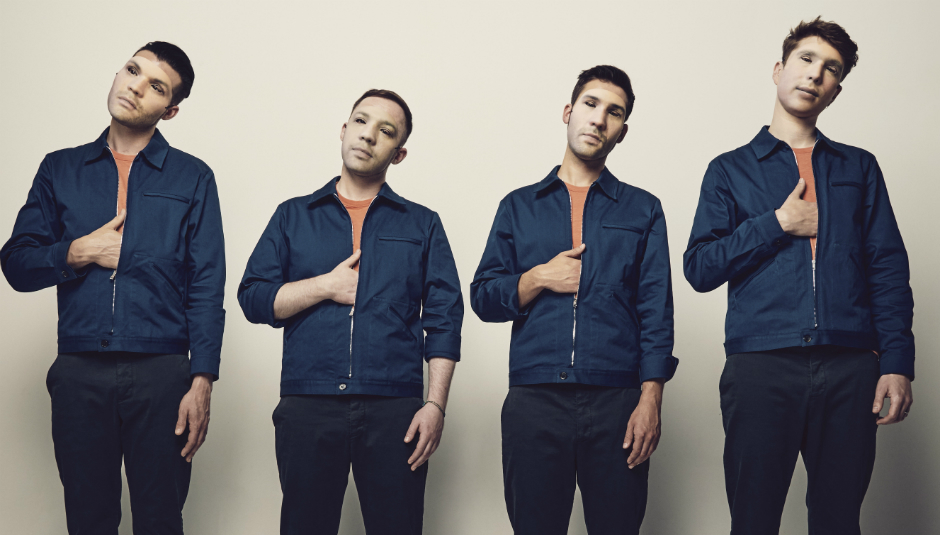 “This is the dream”: DiS Meets Everything Everything

“This is the dream”: DiS Meets Everything Everything

When I pick up the phone to speak to Jonathan Higgs, lead singer of alt-rock titans Everything Everything, he tells me he has spent all day painting a wall in his house. “I’m painting it green. Apparently it makes you go mad if you paint a wall green.”

His madness may have already taken hold. As we speak, Higgs is streaming Fox News into his Manchester home. “I watch quite a lot of American news because it’s funny. It’s like a strange play, and watching the way they interpret the same stories as we do but in that ridiculous way, and the bizarre way they look, is hilarious. I quite enjoy it.”

It’s a funny image. I’m sitting in a busy cafe just off London’s Regent Street, straining to hear Higgs above the coffee machine and children’s cries. He is the lead singer of a successful four-piece band whose records have racked up Mercury Prize and Ivor Novello Award nominations, and whose much anticipated fourth record, A Fever Dream, is set for release this Friday. Meanwhile, Higgs is sitting at home, choosing to stream one of the world’s most bizarre, most biased, and most problematic news channels into his house, purely for entertainment value.

His keenness to find hilarity and amusement in feats that would otherwise be fearsome or dangerous is a theme which runs throughout our conversation, and this insistence on finding humour in the horrific is by no means lost when it comes to the band’s music. As a title, A Fever Dream is at once soothing and startling. Higgs explains it to me. “I was trying to think of a way to encapsulate the feeling that's been slowly swamping everybody for the past couple of years and it seemed like that was the best description I could find. It’s very surreal – A Fever Dream feels right for when everything is changing in front of you. Sometimes it's nightmarish, sometimes it's amazing, and no one really knows why.”

The song which lends its title to the album is notably softer and more beautiful than the sound with which Everything Everything have made their name. More often than not, their music is comprised of jarring chords and revved-up riffs, with Higgs’ distinctive fast singing providing a call for arms over the top. Instead, ‘A Fever Dream’ begins with a delicate piano counter-melody. Higgs declares it a lullaby. “It’s ‘go to sleep - it’s just a dream’ and then when you actually go into the dream it’s darker but hypnotic. It’s almost wanting it to be a mantra that gets said as you make your way through life. ‘I see a fever dream’ is a way of saying ‘I recognise that everyone’s feeling like this’, rather than saying ‘Isn’t everything terrible?’, or ‘Isn’t everything great?’ I’m just saying, ‘This is fucking weird, isn’t it?’ That’s the idea.”

While countless musicians are writing about our planet’s impending doom, it takes a very blunt human voice to simply acknowledge a feeling and label it, rather than feel inclined to get angry or upset, or start attaching any emotional response. Does he think Donald Trump is really going to start a nuclear war? “It doesn’t even raise my eyebrows.” All Higgs can stop to say is: “This is it. This is the dream.”

This insistence on labelling and observing ridiculousness, and taking an outsider’s observant perspective, has led to an album of incredibly inventive songwriting. At a July gig at London’s Heaven, one of a handful of shows where these songs were played live for the first time, the band opened with ‘Night Of The Long Knives’, a gruelling title for a raucous song which opens the record too. The historical reference to Hitler’s violent clambering for power is unmistakable. On the Night of the Long Knives in 1934, Nazi officials purged leaders of the SA, intending to consolidate Hitler’s absolute hold on power in Germany.

On their 2017 song, Higgs sings, “They say it’s a wave but it feels like a dribbling mouth”. Higgs is all too keen to dissect this for me. “Instead of taking the scary alt-right wave and saying it might be a wave, I’m saying that actually it’s crap and a bit pathetic, and a lot of people involved are just very small arrogant little men. I’m just trying to do it down as much as I can, to undermine it as much as I can.”

“I wanted to draw a parallel with his rise and the rise of the right and put that imagery in people's minds before we even begin, but then immediately tear it down and say ‘They're a bit shit, aren't they?’ It's kind of funny how angry they get about everything. I just like playing with it.”

The recording process for A Fever Dream, first in Liverpool’s Parr Street, then back to Oxfordshire’s Angelic (where the band recorded 2013’s Arc and 2015’s Get To Heaven), allowed for a lot of time for play too. Higgs explains the way the band always make sure to “save some wildness for the day”, namely recording some things right at the last minute. “The melody will always already be there, but the lyrics – I leave about half of them until I’m in the room with just the microphone and the guys in the band don’t know what I’m gonna say. I love that feeling – I’m just like ‘Here it is, guys! Fuck you!’”

“What I end up singing will be things that have been swirling around in my head for a while, notes that I’ve been holding onto for a long time. I force them together or see patterns in them, or I have feelings about the kind of song I want to sing, and I do just make them up as I go. There is some completely improvised stuff on there – there always is. Those are quite often the things I like the most in the end.”

While the music that makes its way onto Everything Everything albums is the product of collaboration between Higgs, lead guitarist Alex Robertshaw, bassist/keys-player Jeremy Pritchard and drummer Michael Spearman, the lyrics are Higgs’ own baby, and distinctively so. The band came onto the scene with 2010’s Man Alive and lyrics such as “It’s like I’m watching the A4 paper taking over the guillotine” and “I am one with the furniture, more inanimate than amateur / Like a television set! Gangrene knuckle announced so audibly!”, all spat out at lightning speed and a distinctively high register. On new track ‘Ivory Tower’ Higgs sings, with all sincerity, “Come and crush me in the Waitrose aisle”, and “I wanna see you with the caps lock on”, two points of marked ingenuity – or complete madness, if you prefer to look at it that way – either one highlighting Higgs’ idiosyncratic lyrical style.

I ask how on earth he comes up with these odd turns of phrase, these inconceivable juxtapositions and outlandish images, suggesting that the notes on his phone must be a minefield of recorded chimes of inspiration. “My notes are ridiculous. There are reels and reels. Sometimes I write just one or two words, sometimes little paragraphs. Sometimes I think about how I was feeling when I wrote that down and I try to investigate that a bit more.” Part of this figuring out how to phrase things is to do with “trying to say stuff without it getting in the way of itself, trying to say things simply without it being too boring and bland, putting in more unusual words into really hooky poppy things without it being too unwelcome.”

For Higgs, lyrical inspiration does not come from literature or poetry, as many songwriters would claim theirs to. In fact, he admits to reading very little fiction, preferring instead to browse articles online and watch TED Talks, while keeping up-to-date with Fox News, of course.

Eavesdropping provides Higgs with just as much language of interest. “I hear people talk and I’m less and less interested in poetic language and more and more about language people could use, day-to-day poetry that happens by accident rather than a huge description of a flower or something supposedly beautiful. I’d rather pick things that mean something to me and then play them off against other things that mean something to me, and find the beauty in it that way. It’s a balance between high prose and feelings and stuff you’d hear when you’re getting drunk – that is what life is like so I try to replicate it.”

I cannot help but ask Higgs’ thoughts on Everything Now, the new album from Arcade Fire which, after a lengthy and sardonic release campaign, fell to poor critical reviews and a negative consensus from fans and musicians alike. Higgs holds nothing back. “Some of the tracks on there are just genuinely, jaw-droppingly bad. The whole thing, even the release of the album, seems like an elaborate prank. We talked about this in the band and we all think the real album is yet to come, and this is a joke album. The whole campaign has been sarcastic and trolling. We think the release of the album is the ultimate prank and the real album is gonna come out soon. With every day that goes by it’s less likely, but still…I’m holding onto it. It would be very bold.”

As ever, Higgs understands this as a dream, and looks for the humour, the trick, in amongst the nonsense. All he can do is laugh. But amongst this is a slight undercurrent of bitterness in his voice. Would he like to have the resources to pull off such an elaborate prank, if that’s what it is?

“We’d love to do that. We’d love to have the fan base and attention to actually pull that off. And the money! The money to do a false release – that would be amazing. But no – we had to make an album, and put it out, and make it as good as we can.”

At that moment, the reality of the process seems to hit Higgs. A Fever Dream may meddle with ridiculousness, lucidity and nonsense, but it is no prank. Everything Everything have to play it by the book and make their record the best they can, even if their lead singer is flirting with madness.