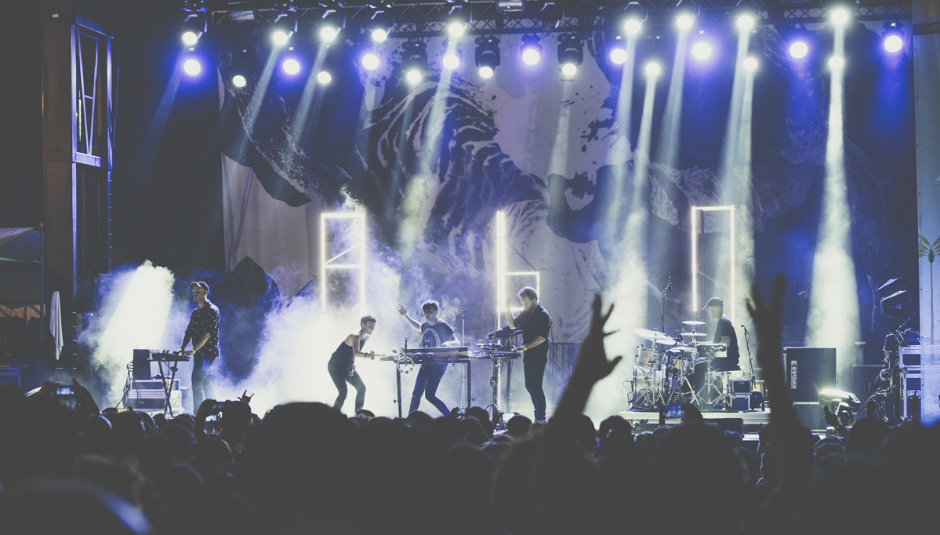 Forget glitter stuck to the shiny faces of British festival-goers. At Siren Festival in Vasto, on Italy’s Adriatic coast, it is the sparkling sea which glistens in the Abruzzo sunlight. 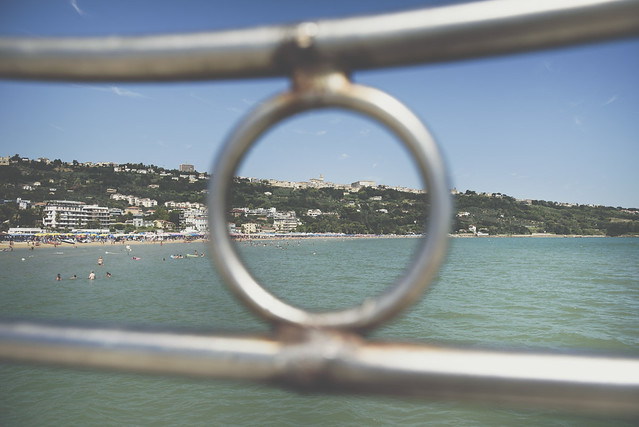 The idyllic festival is indebted to the Adriatic, taking its name from the 1979 bronze monument to a female summer bather – a Siren – which stands on a rock in the Vasto Marina. It relies on the sea for the stunning backdrop of the main stage, which sits on the hillside of the Old Town, in the Piazza Del Popolo. Here the audience get to gaze upon the sea as the programme’s offering of indie, pop, electronic, and hip-hop bands play in front of them. Just two minutes’ walk down the Via Adriatica is the smaller curbside stage, Porta S. Pietro, where the tables are turned: here it is the performers who look out over their crowd and deep into the sparkling blue.

Now in its fourth year, the small festival has regular attendees who have settled into a routine. We start the day at the beach, a twenty-minute walk or short bus ride away from the hillside Old Town. At Siren Beach, bikini-clad revellers are treated to short gigs from musicians in a bustling bar area, as Radio Sonica broadcasts sets from Old Fashioned Lover Boy (a twee Nick Mulvey), Andrea Laszlo De Simone (reminiscent of eccentric folksters Edward Sharpe and the Magnetic Zeroes), and the quietly impressive Mesa, who delivers a staunch rendition of Angel Olsen’s punchy ‘Shut Up Kiss Me’ in between her otherwise softer arc of acoustic pop.

What marks Siren out from other festivals of its size is its willingness to invite an adventurous and diverse line-up. In its very first year, Vasto hosted The National and Fuck Buttons. In 2015, James Blake headlined, playing new, previously unheard tracks from the then upcoming The Colour In Anything. It’s noticeable that each year’s line-up has slightly more electronica than the last, though typical indie guitar bands still infiltrate the smaller stages: Francobollo’s Friday early evening set is fun and gritty, the floral-shirt clad musicians still damp from a dip in the sea that afternoon; Giorgio Poi’s set on the same stage the following evening is a cosmic interpretation of alt guitar music; big draws the Allah Las and Arab Strap fill the courtyard venue Cortile D’Avalos fit to bursting. 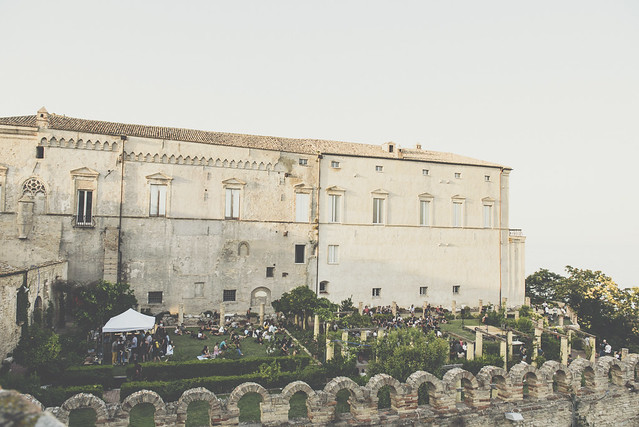 But the most exciting moments come in more surprising places. Milan-based rapper Ghali draws the rowdiest audience of the weekend, his shouts of “Tutti!” getting the crowd riled up as the DJ on stage with him throws up raucous hip-hop beats. 70s industrial pioneers Cabaret Voltaire keep the packed-out Cortile D’Avalos moving with trance-like techno against stunning stuttering coloured video footage. Londoner Ghostpoet rocks harder than expected, his incredibly soulful voice lingering over every passionate syllable.

By far the stand-out performance of the weekend comes from Israeli producer and electronic musician Noga Erez, whose set sees the feisty politicism of her June debut Off The Radar brought to Italy for the first time. This is an album which traverses themes of sexual assault and government-fuelled poverty, but the sincere subject matter doesn’t detract from an energetic pop set, as the audience quickly chant back lines such as “Oh you’re so pretty / Skinny, skinny, skinny” and “I know about it / Who the fuck are you?”, as they are repeated over and over. 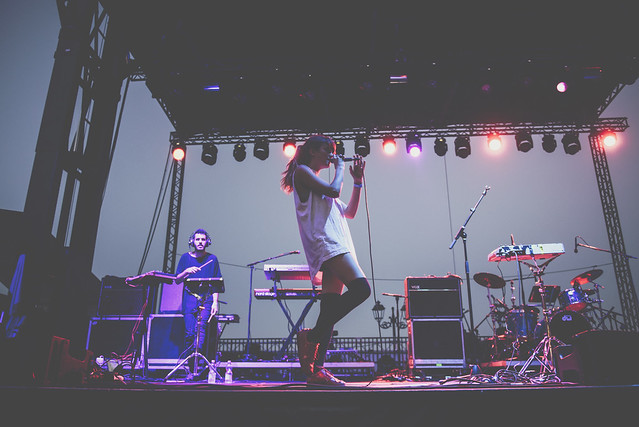 One feat of experimentalism which goes too far is Norwegian Jenny Hval’s erratic set, which falls a little too early on Friday evening for anyone to make sense of. The unpredictable nature of Hval’s set, as well as her attitude towards a largely non-English speaking audience (at one point she complains at the lack of applause, before muttering that she doesn’t really mind – she’s still going to get paid), feels unsettling in an environment where every other band, and indeed every festival-goer, is incredibly warming.

This warmth completely encompasses the feeling of the festival. Despite lively crowds in front of the two larger stages, with enough people to provide a full and fervorous atmosphere, there is always enough room to dance and sway without fear of hitting those either side of you. Queues for the bars and food stalls are short. Festival-goers are musically-engaged and relaxed. As a young woman on my own in a foreign country, standing in large crowds of excitable people, not once do I feel vulnerable or too squished-in. It is no mean feat to fill a whole festival with this inclusive, relaxed atmosphere: festival and gig-organisers around the world should take note of Siren’s success. 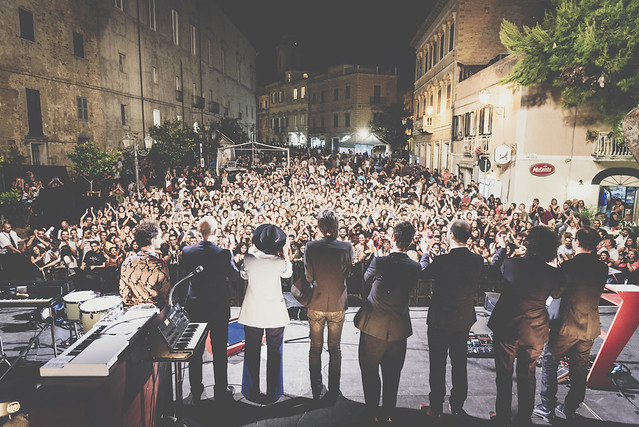 Siren’s idiosyncratic spirit comes to a climax with Sunday’s closing act, the incomparable Jens Lekman, playing a late afternoon set in the stunning Chiesa di Maria Santissima del Carmine. Despite a last-minute venue change (Italian priests are notoriously strict about letting out their churches as venues), an eager seated audience is charmed by Lekman’s quirky art-pop. Instead of mimicking the piano-heavy sound of this year’s Life Will See You Now, Lekman plays acoustic guitar, joined by a Roland sampling pad later on in the set. From the sweet pop of ‘What’s That Perfume That You Wear?’, to disco-influenced ‘To Know Your Mission’, Lekman’s keen ear for a charming melody and twee autobiographical lyrics leaves feet tapping in the pews.

At the end of his set, Lekman slings his navy suit jacket over his shoulder, strides down the church aisle, and walks out the open doors into the burning sun.

We follow him, and then head back down to the beach, to enjoy the last of the Italian sun, and that sparkling, sparkling sea. 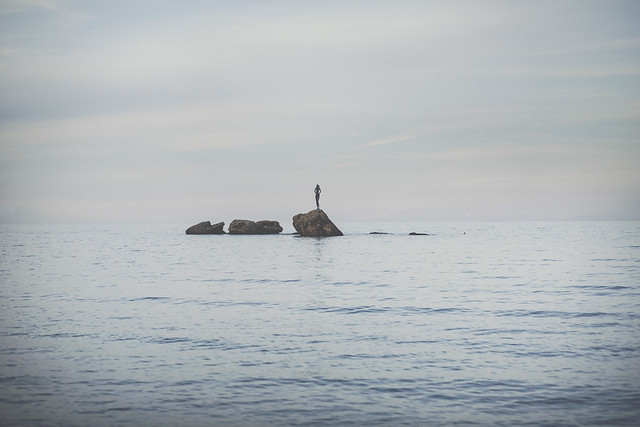 “The greatest lesson was simply to le...