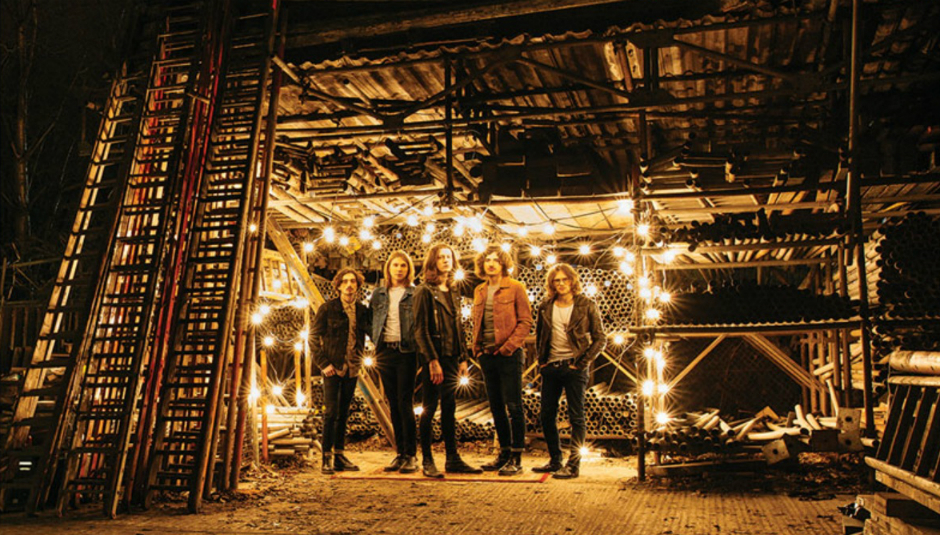 
Although I haven’t knowingly heard any of Blossom’s output before, I should add a disclaimer that I’ve researched them a bit before diving in, just to have a vague idea of what to expect. It hasn’t been hugely illuminating. They come from Greater Manchester (who doesn’t?) and have collaborated with Chase & Status (who hasn’t?); there are five of them (oh God, they’re not going to be like Take That are they?), expanding the standard guitar-band setup to incorporate a keyboard/synthesizer (oh God, they’re not going to be like Snow Patrol are they?). I should also add that I am predisposed to like this album: this is mainly down to an ‘Anyone but Sheeran’ policy (I still can’t get over the fact that on ‘Castle On A Hill’ he quaintly reels off tales regarding the struggles of his past rural friends, as if to say “How down to earth that I, an inexplicable gazillionaire, still remember these scum from time to time”). I also quite like the idea of a debut album doing well, because if the xx or alt-J are anything to go by, they’ll be releasing grey dinge-water by their third album. So anyway, here goes with the record.

Immediately jangly entrance. Oh, I’ve heard this before; it’s their lead single, of course. Repeated “hello, hello” is worryingly similar to U2’s ‘Vertigo’, and they’ve just rhymed “head” with “lead” in the first couplet. It’s fine enough listening, a nice enough central jingle, but there’s no depth beyond it; a lazy middle eight, building to a just about convincing ending.

This is immediately better. The synths are still front and centre above rumbling guitars, but this song has a genuine momentum to it. A few more forced rhymes from singer Tom Ogden, and the lyrics are generally uninspiring (“This heart it beats but makes no sound” might have sounded good in an indie ‘potential lyrics’ notebook, but surely has to be discarded before production). The drums pace along well, the guitars riff along nicely, but it’s not exactly revolutionary.

Now we have a slight change of pace; a slow opening, building into the second verse, and it works on the whole as a perfectly nice pop song. But as before, its adequacy is also its flaw; there’s nothing to separate them from similar bands that grew up listening to Razorlight and The Kooks and end up like Circa Waves. I did enjoy this song though, but there’s nothing yet to convince me that I need a whole album of this in my life.

There’s nothing that I can say for this song that I haven’t already said.

Ah, Myles Kellock has now exchanged the synths for his keyboard, but the chord progression is heavy-handedly percussive. It’s mainly a duo between him and Ogden, the only interest to the song added to the sonic swirl building background – is this going anywhere? Instead of building to a crescendo, it actually fades into a smudged swirl, which is actually quite interesting, falling into a presumably intoxicated stupor ‘Onto Her Bed’.

A return to their more propulsive pace, an encouraging sign that there is some thought going into the composition of this album. They work together well as a band, all complementing each other’s work. None of these songs are particularly bad, there just isn’t much that is particularly good yet; they don’t seem to have much ambition with their songs, happy to repeat lyrics (“With you, with you, with you”) and riffs for around three minutes until they have a passable indie pop song.

I’ve heard this one too! I was originally concerned by the title that it was going to be a wannabe Stone Roses tribute, but fortunately, it’s not. This is by far the most enjoyable and best-crafted song so far; the promise of previous songs seems to be coming together.

A darker tone to this one, bringing bassist Charlie Salt to the fore. The syncopated chorus is fairly entertaining, but again they can’t seem to develop an interesting kernel of a tune into a song of any significance, resulting in the last 40 seconds being a drawled repetition of “Smashed pee-aaa-noos”.

The most eye-roll-inducing of the titles on the album. It sounds quite like a few of the previous ones (‘Texia’, perhaps, or maybe it was ‘At Most A Kiss’; at this stage, they are frustratingly interchangeable). At about the halfway mark it gets into gear, bringing out a guitar solo that is predictably by the numbers.

They’ve gone acoustic for this one. They had to go acoustic at some stage: those guys who wear a trilby beside a campfire have to have something with which to serenade the girl beside him wearing an Accessorize flower crown. There are attempts of emulating Alex Turner’s ‘Piledriver Waltz’ with this one, which is just about the biggest compliment I can give a song, but it doesn’t quite have the lyrical sophistication or the effortless swagger.

Electric is back, throttling in with the spikey guitar of Josh Dewhurst. He dominates with a riff, before an actually brilliant solo after the halfway mark. More middle-of-the-road lyrics, I’m afraid: “The cold road is all I know / The old road is where she blows” as if that means anything.

The final half swells and fades in an intriguingly sinister way, but otherwise, it’s more of the same. Am I allowed to make the plodding synthesizer that stomps throughout this closer a metaphor for the album as a whole? Absolutely fine, wholly competent, utterly forgettable.

So there we have it, yet another group of lads with guitars have released yet another album incorporating adequate riffs and jangles. They are keen for you to know that they consume drugs and get drunk and have sex and fall in love; I might have missed any deeper thought or emotion, given that I’ve only listened to it once, but the fact that most songs consisted of repeated lyrics for large parts, which were fairly transparent the first time round, I doubt it. There is no doubt that these guys are talented enough musicians, but their lack of imagination or ambition for individuality is sort of remarkable. It’s pleasant enough listening, a couple of the songs are genuinely decent pop songs, but I’m afraid I can’t understand why they’re on the shortlist. Give it to Stormzy or Kate Tempest.

For more information on Blossoms, please visit their official website.