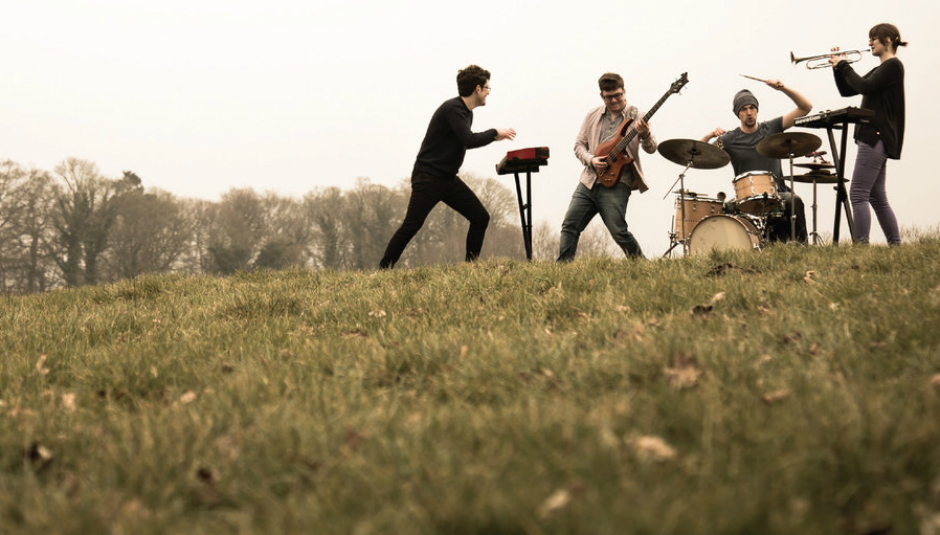 Christopher McBride on Dinosaur's Together, As One.


So, this is this year’s “token” jazz album then, Together, As One by Dinosaur. I’ll be the first to admit that jazz isn’t really my thing, and the only prior jazz nominee at the Mercury that really grabbed me was the one by The Comet Is Coming last year. However, Dinosaur seem to come highly recommended by every single publication that has the word “jazz” in its name (Jazzthing, Jazzwise, Jazzthetic etc), so who knows? I shall keep an open mind whilst listening, as this could be the one that leads me down that potential rabbit hole.

Ooh, bleeply bloopy starts, and some exotic sounding instruments. Interesting. There’s a lot of build. At least, I think it’s build. And some brass! Brass is nice.

Now some more trumpet. And a bit of bass.

…and I’m getting bored.

They changed it up for about 10 seconds, then back to its languid self again.

Why am I reminded of the Homeland theme?

A wee bit of easy-listening keyboard now, which is okay, I guess.

This is one long song, five minutes in and still it hasn’t got to the good bit yet.

This would be incredibly relaxing music, if the trumpet wasn’t just so chaotic. At least I know I won’t fall asleep.

I think the song’s over, but the drummer’s having none of that, so everyone else has to come back in again.

I THINK these bloops spell this song’s end.

This one starts off rather jauntily.

It changes quite quickly, first into what appears to be KPM Library music, and now into something a lot funkier.

This has Morris Dancing vibes to it. In a good way.

And now it sounds like the theme to a 70s sci-fi film This song appears to go in one direction for 15 seconds, get bored, then start a new song straight away, occasionally flashing back to the song they originally went for.

Well, at least it’s a bit more interesting than the last one.

I wonder why they called themselves “Dinosaur”? They must have known in this digital age that it would be nigh on impossible to find them online. Unless they wanted to make sure that no-one would come across them and listen to them. Although they make jazz music, so that alone should be enough.

A nice bass/trumpet flourish to finish. Getting better.

Well, this is a first. They’ve hooked me from the first note. Arpeggiated keyboards are getting stuck in my head.

This one seems to have some potential, it’s a rather spacey tune, with the usual trumpet parping up on top.

This one feels like it’s going somewhere. I am on the edge of my seat.

Well, I think the good bit of this song’s over. They’ve thrown lots of ideas in here, some good, others not so.

I wish I knew more about jazz to determine whether this is good jazz or ungroovy jazz, because as of yet it is indeterminable. It’s not my cup of tea.

Well, a song under three minutes at last. It feels a lot more straightforward than their other songs.

Actually, this one is pretty decent. Probably would make a better song without the trumpet though, which I understand would undermine the point of this album.

Another short one. Me and my short attention span approve. Millennials, eh?

I wonder if the dude from La La Land would want to save jazz music after listening to this album?

A band called Dinosaur, with a song called 'Extinct'? I see what you did there. Very clever.

I’m pretty sure this bassline has been borrowed from 'My Girl'. Nothing else has been though.

I am sure these musicians are really talented. I bet they could charge at least £30 per go if they were giving lessons, even outside the Greater London area.

Epic keyboards. But the wrong type of epic.

Remember that dance song that had the trumpet in it with the lyric “Would you go to bed with me?”. That was a banger. This isn’t.

Nice drum start, and the keyboards are going to some groovy places. If it stays this way for the next six minutes, I may just like this.

And it hasn’t. What a shame.

There are a few Apollo-y sounds. Doesn’t change my opinion on the song, but just letting you know that they are there.

There’s a lack of triumphalism on this album. I know that jazz shouldn’t sound really triumphant, but a little bit of fist pumping action wouldn’t go amiss every once in a while.

And finishing off the album with a song called Interlude. How incongruous of you, you crazy jazz people.

Some harmonics going on here, and much more pared back. Not an entirely bad finisher.

So all in all, it’s safe to say that Together, As One was not my cup of tea. I imagine that if you’re a fan of your jazz, especially the more esoteric, freeform style, then you may enjoy it, but if it’s a gateway into the genre that you’re looking for, then I doubt this will tickle your fancy.

The Mercury First Listen Review: The ...