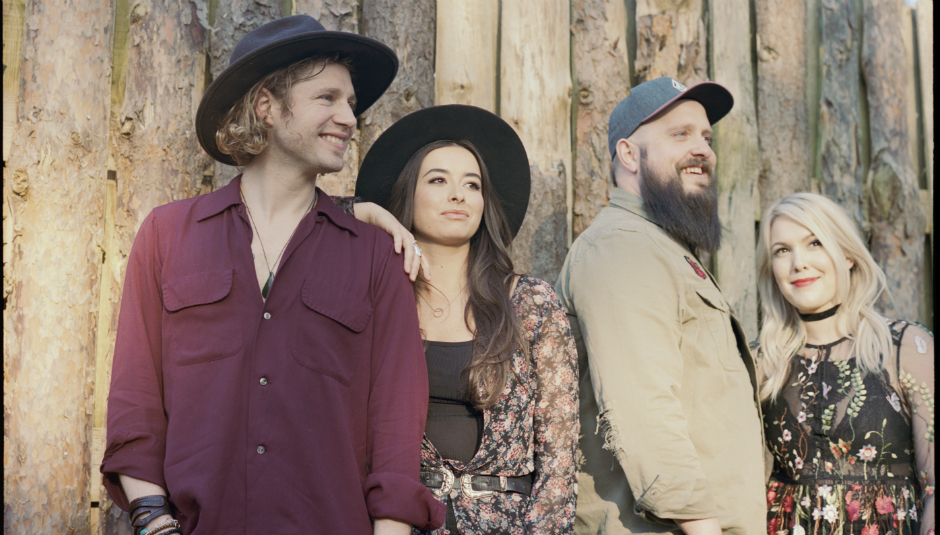 There’s a quiet energy behind The Wandering Hearts, like a low thrumming sound that everyone can hear, but nobody notices until it stops. I can feel it on the phone to them; I swear I can actually hear it. I check my phone’s not playing up again. It’s probably the phone.

Either way, there’s no denying the momentum that’s gathered around the band. The quartet, whose names suggest a gentrified Steps cover act – Chess, Tara, AJ, and Tim – were all gigging musicians around London, before coming together 18 months ago. In each interview, they’re keen to stress the work that went into the build-up, and that still goes into the band now, because one (apparently true) story keeps coming back to them: that they were discovered by their manager on SoundCloud within half an hour of uploading their first material. The rest is fast becoming history.

The band are the first to admit that they’ve been blessed with fortune alongside the blood, sweat, and tears, but if an element of luck propelled them, they’d be found out pretty soon: they’ve already opened for Tom Petty and Stevie Nicks (at one of the recent Hyde Park shows), and played a sell-out show in the capital. Sharing those kind of stages that early in a career will ruin a band fast if they’re chancing it. The Wandering Hearts appear to be thriving.

With second single ‘Devil’ just released, the band are now eyeing up their next challenges: a forthcoming album ('Every track is a banger'), going to America, and ‘risking it all’ – while sticking to their strategy, of course. We spoke to AJ and Chess about how they were dealing with it all, and as they discussed the music and ideas that unite the band, the passion in their voices was audibly shot through with electricity. Either that or my battery needs replacing again.

DiS: You’ve already had some massive gigs, playing at Hyde Park on the same bill as Tom Petty and Stevie Nicks, and another sold-out show in London. Do you think, with the successes of bands ranging from First Aid Kit to The Lumineers, that country and Americana is seeing a resurgence in the UK?

AJ: I think it definitely is, for a number of different reasons. It clearly goes to demonstrates that there's an interest in that music, and all sorts of different offshoots of it too – not only with the American bands that are coming over here, but increasingly UK musicians are getting into that vibe as well, and finding out what it means to them, rather than just regurgitating something from overseas.

Chess: I feel like you can even see it branching into pop music. Everyone seems to be focusing on lyrics, and meaning, and truth. So I think that’s why the genre that we’re in feels quite broad, and the audience feels quite broad because it seems everyone has something to relate to in it.

Have you come across UK acts that you think are doing that well?

AJ: Oh, there’s a few. We’ve been quite lucky to support acts like Ward Thomas, and we’ve been pretty good mates with the guys in The Shires as well. But there are tons of artists out there who are doing it, giving nods to it in various different ways, and I guess discovering what it means to be an Americana or country-based band in the UK. It’s a really interesting time, and for us, that’s part of the journey: how we relate to that, and how we make it our own.

I know you’ve mentioned various influences on the band. Is there a particular album that you still listen to and think: "God, I want to make a record like that?"

AJ: Given that we all have quite different musical tastes, there are a few things that unite us. I think, Chess, it’d be fair to say one of the artists we really got behind when we first all met each other and started playing was Chris Stapleton. Traveller was just out at the time, and we were really getting into it, mesmerised by this dude’s voice and his songwriting.

Chess: It really did unite us as a band as well, didn’t it? Because it was the first thing that, across the board, we were all like: "Oh my god, this is amazing." That album is incredible. So yeah, early on, that united us even more as a band.

There’s a certain dreamy mythology that surrounds places like Nashville and the scene that sprung up around it in the US. Have any of you been to America yet, or have any plans to?

AJ: I go to Nashville as often as I possibly can, just because I love it and I have some friends over there. As a band, we’ve not yet made the pilgrimage, but we are hoping to this year.

Chess: It’s on the cards, fingers crossed. It'd be great for us all as a band to be out there. AJ’s told us stories about when he’s been out there, and we’ve all got so jealous! We really want to be out there together, I think it’d be fun.

AJ: It is phenomenal.

Your manager discovered you on SoundCloud within half an hour of uploading your first songs. Do you feel that streaming services are a good thing for new bands like yourself?

AJ: It’s kind of a tricky one, and it can be a double-edged sword for bands that are starting out. You’ve got this incredible opportunity to get your music out there in front of people. I think with the right legwork and making sure you’re playing the right places, it’s a good thing, and some people have really made it work for them. Obviously, we’re in a very fortunate position, and everything has been a bit of a blur since then. But we all still back that up by doing gigs, making sure we’re getting our music directly out there and into their ears for the first time. For new bands starting it can be a really great tool. You’ve just got to make sure you’re playing it right.

Chess: It’s about timing, and not just putting out music for the sake of it. Strategy, as well, behind what you’re doing.

Chess: And having a plan, not just throwing music out there at random times. That’s where we’ve been quite lucky as well, because we’ve had some guidance at the right times to do certain things, and release stuff. It’s all of that we’re already learning along the way. So I’m trying to help other people who are coming to me and saying, ‘How did you do it? What should I do?’ You do have to be a bit clever about it.

We’re expecting your debut album later this year. Are there going to be any surprises, or is your sound pretty much nailed down at this point?

Chess: It is a bit of a mixture I’d say. There’s some of what people have heard already, that more commercial-sounding stuff. But as a four-piece, the way we like to write will often involve a darker lyric with a cheerier tune, or vice-versa. Some of the stuff we’ve got on there is quite dark and folky, and then some of it is more commercial and upbeat perhaps, but I do think it crosses a few genres throughout.

AJ: I agree. There’s a bit of something for everyone, tied together with our own sound. But it’s quite accessible. It was really difficult trying to hone down the songs we were going to put on the album.

I heard there were 40 songs.

Chess: I think it was over that.

AJ: Yeah, we’d been writing like machines, and loving it. That’s one of the things we really got into it – we’d all written separately before, and then we were getting together as this crazy hive mind. Whittling it all down for the tracks on the album was tricky. But as a result of that, we’ve got some of the strongest songs. Every track on this album is a banger for a different reason.

Who generally writes the lyrics?

Chess: Yeah, everyone just seems to find their place with it. It’s really weird. Each day would be different, each session would be different. It wouldn’t always be the same person. Depending on how you’re feeling that day, someone might take more of a lead. But then that just springs onto someone else. So between the four of us, we bounce off each other, and there’s never a down point because there’s always someone there to take the lead.

AJ: Because of the way we tend to write as well. Some of it is stories, but we try and root as much as we can of our writing in personal experiences. As a result of that, I think sometimes we find certain songs that we’ll relate to differently, and put our own meaning onto. As a result, someone might get carried away with something… But we all chip in, and at the end, it’s something that all four of us are proud of, rather than an individual thing.

Chess: We’ve all invested in it, too. Hopefully, the audience will feel that and can relate to it for different reasons. It might not have one meaning but means something to us all.

Your new single ‘Devil’ seems to have some darker lyrical themes. Was that intentional?

AJ: It touches on feelings of insecurity, but also when you feel like you could be a much better person than you are, perhaps feeling a bit down and out. Then getting this opportunity to save yourself, maybe through another person, or making a choice to live your life the way you want, and to be okay with it. Saving yourself from yourself. But also this idea that someone’s out there and rescuing you.

Chess: It’s got a bit of a rebellious streak in it, I think; you’ve chosen your actions and you’re going to do it anyway, you’re going to take responsibility for your actions. I guess it’s kind of not conforming to anything, so it’s quite hedonistic, and I think it’s got quite a powerful feel to it. It’s quite empowering to sing it. Every single time the four of us play it live, we all absolutely love it and get into it more than any other song that we do. We’re not really sure why, it’s just got that power.

AJ: It’s quite life-affirming, isn’t it? When you feel you’re being really honest and baring your soul, it’s all out there. Putting it all on the line and being like: "Well hell, this is it, this is me. Deal with it."

Chess: But being a musician, that’s the life you live, and the life we have always lived. You’re constantly putting everything on the line. We feel like we’re giving everything, and not knowing what the outcome’s going to be. You do kind of feel like you’re risking it all.

'Devil' is out now via Decca Records.