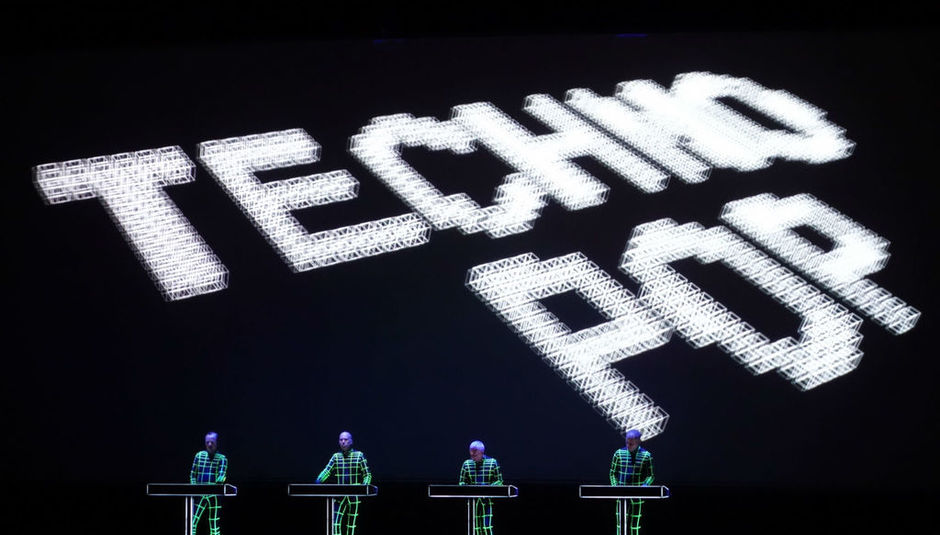 First of all the contrast between the venue’s (gorgeous) ornate Victoriana and the resolutely modernist/contemporary sounds being generated onstage just somehow worked, adding an extra layer to the experience that was already rich with strata.

So, you had, of course, the music itself – and how the hell can a band who has been around this long still sound like the future? You also had the four – remote, undemonstrative – figures on the stage, a trellis of LCD lights criss-crossing their black outfits, stood behind their individual podiums, absolutely like you would expect, and - counterintuitively, perhaps - the least interesting part of the spectacle. And then you had the visuals, projected behind the ‘band’ and often popping out into the centre of the auditorium courtesy of the glasses handed out to everyone in the audience on arrival – clean, bright, slick and, when matched with the music, utterly entrancing.

'Numbers' was accompanied by shifting, swirling 1s and 0s, undulating and hypnotic in exactly the right way for that track. 'Computer Love' made you feel fraudulent for being at a seated gig, virtually screaming at you to get up and dance.

'The Man-Machine' was an early highlight (at this point we were still only five tracks in, but euphoria had already long taken hold), the spacey visuals (flying saucers! in 3D!) of 'Spacelab' even more so and then – wallop – they hit us with 'The Model'. Obviously the band’s best-known track, the visuals here were the most organic that we saw. Instead of futuristic primary-colour graphics we got grainy black and white footage of actual old-time models, fittingly, accompanied by some of the more human-sounding and, again, organic vocals of the evening. It all added up to a surprisingly emotional moment, from a band that is often pigeonholed as making aloof, impersonal, unfeeling music.

And that was probably one of the two main take-outs from this entrancing show, for me. How they do it greater musical minds than mine would have to say, but Kraftwerk, live, is a totally warm, inspiring, exciting and utterly human experience.

As the set pulsed on - from the transporting glories of 'Autobahn' and 'Tour de France' through visual highlight 'Vitamin' to a quite astoundingly brilliant 'Trans Europe Express', rounded off with encore 'Robots', absolutely everything you would want, sonically and visually from the band - the other striking thing was just how utterly contemporary their catalogue still sounded. Contemporary, influential and vital – in their motorik beats and synth grooves you can hear techno, house, rave, electro and a whole stack more of what followed along in their wake.

A Kraftwerk gig isn’t really just a gig, when all’s said and done. It’s so much more than that - a visual, musical, emotional, funny, entertaining banquet for the senses. And it’s also just so much goddamn fun. Mind: BLOWN.