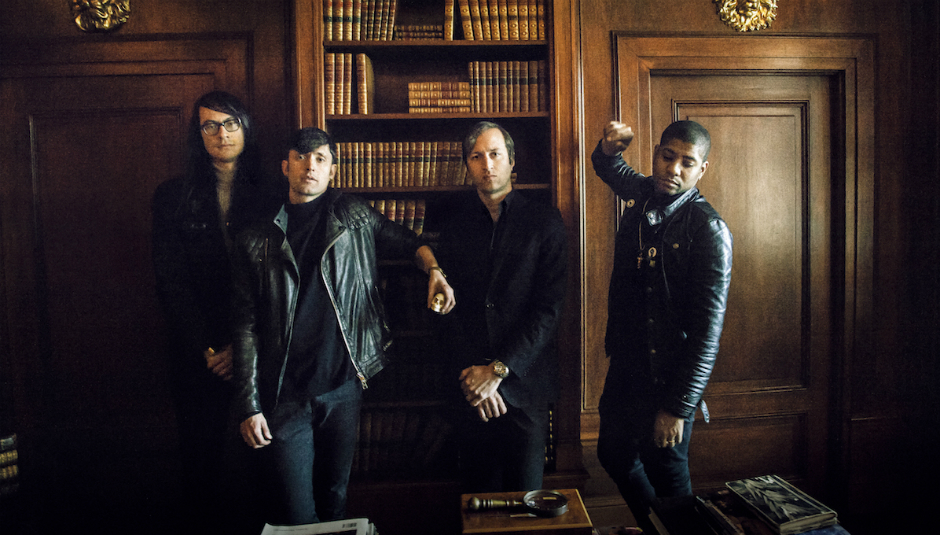 As you'll have seen from Christian Cottingham's incisive and glowing review of their new album ”The Underside of Power”, or heard for yourself by now, Algiers are a band with plenty to say who are becoming one of the most important bands in the world.

Produced by Adrian Utley and Ali Chant, ”The Underside of Power” may, in these most highly-charged of years, be 2017's most political record. It's a good job then that as well as biting lyrical challenges and pleas, the record is shot through with rhythmic and melodic vitality and potency. This is a record to lose yourself in, to inhabit. It's an album to listen to in one sitting and, once completed, to commit to living as a changed person, seeking to bring healing and justice to a hurting and unjust society. Can music do this at the same time as being entertaining? We certainly hope so. Algiers are one example of a crucial group of bands seeking to do just that.

As they geared up for the release of their second album, Haydon Spenceley spoke to the band to give then the chance to tell their side of things.

DiS: You're on tour with Depeche Mode right now in Europe. How's that going?

Matt Tong: It’s quite something, I’ve got to say. I like the bit in sound check where I hit the kick pedal and it sounds like the drum of God. It’s a sick power trip. We’re mixing up the tour with our own club shows so we’ve been going from playing in front 50-70k people to a crowd 1/200th the size. In terms of playing shows, you couldn’t really have much more of an extreme experience, but we’re handling it pretty well. If anything it’s crystallised the idea that once you’re onstage, a gig’s a gig. I can’t say I’ve been approaching either end of the spectrum differently. But anyway, it’s been an insight seeing what goes into putting on a stadium show. And Depeche Mode... what a treat to see them do their thing. Very impressive.

Lee Tesche: It’s pretty surreal. Everyone in their crew is incredibly nice. It’s really interesting to see how these huge shows are run.

Go on, admit it, you're playing them off the stage every night, right?

MT: To be honest every night we play when none of our gear catches on fire feels like a minor victory.

LT: Their set is pretty good right now too. I’ve been pretty impressed by how magnetic and full of energy Dave Gahan is every night. He’s the real deal.

I know you had great shows in the UK recently too. How do you find UK audiences compared to those you encounter in Europe or America?

MT: I think it’s hard to make distinctions between audiences. In fact, with this band, I wouldn’t want to because it tends to create a barrier to one of our aims of reintroducing a platform in popular music for a broad political discourse. Plus we don’t really lean on traditional crowd-pleasing tropes because, y’know, it’s a bit patronising, so we’ve come to expect an array of audience reactions. Some folk tell us we’re too moody on stage and seem like we’re mad at each other. Others become whipped up into a hot frenzy the more our stuff breaks and we become infuriated. It’s so hard to predict who will react to what and how.

LT: Our UK audiences are generally pretty great. I think the UK was the first time I saw people singing along to our songs and really breaking down the barriers between crowd and performer, which is always the goal. When we play in the US, even though we are all from Atlanta and are in many ways an American band, it still feels a bit like we are an English band trying to break the States. People don’t always know what to do with us there.

If it's possible, your new record seems to be even more impassioned and driving than your debut, both lyrically and musically. Talking of the lyrics first, what were some of the driving forces behind the themes you felt you wanted to approach this time?

MT: Well, last year was a bit anxiety-inducing, right? That had to come out somehow.

And musically, things seem slightly more unhinged (take that as a compliment, please!), looser and more primal. Were you going for that or am I way off?

LT: After touring for two years on the back of the first record, and becoming really tight as a band, we really wanted to capture some of that energy in the studio. Running out of time and having to squeeze in sessions between other commitments, the process became a bit disjointed and manic. The first record was a very singular, long, steady grind of recording, and we really took more time to consider and rerecord things that were bugging us. This time around we captured more of a strange moment or period in our lives in a short burst or blur. It was a different record in that sense.

MT: Again, I think last year had something to do with it. But also two years of touring “Self-titled” brought out a quality in the band that we wanted to explore. At one point, Ali Chant and Adrian Utley set up a PA in the studio and recorded some of Frank’s vocals through that, and it felt to an extent he bought into the idea of performing in the studio, which, as we all know, is somewhat of a sterile environment to recreate the intangibles of a live performance, so he sounds kind of raw on some of the new songs. Also due to a myriad of logistical snags too tedious to elaborate, the recording schedule was a bit disjointed so we never got too comfortable in one place and I think the music we made reflects that.

Where's the joy? Is it to be found in there somewhere?

LT: Oh definitely. There is joy, humour, and sex mixed in with everything else. I think we all hear different things and in different ways.

MT: Oh it’s there alright. Joy is just as much a part of the human experience as everything else, but since this experience is complicated and multi-layered and liquid you’re going to find it diffused in anger, frustration, defiance, sadness... the title track perhaps best encapsulates this, where one of the things Frank explores is the idea that even if there’s the tiniest gap from within which to work to overturn a disadvantage, there is a hope of sorts.

Gospel seems to play a large part in the sound of Algiers and in the almost choral, communal nature of some of the vocal work. Themes of justice and righteousness never seem far away. Does faith play a part in who you are and what you do, or is it more about the doubts and the shades of grey?

LT: The Gospel in a biblical sense definitely plays a role thematically, as it has historically as a literary device with everyone from Dylan to Cave. Gospel music is the bedrock of R&B and rock’n’roll, and it became more extracted with time.

Franklin James Fisher: I think that out of respect to my band mates and with respect to what the band Algiers represents as a whole, it is crucial here to recognize that we are not a group of a singular mind or a singular vision (in terms of being rooted to any identifiable religious, philosophical, or political tradition or institution). Rather, what we have sought out to create is a space wherein the four of us can creatively incorporate any number of historical-political emancipatory projects in order to forge our own language of engaging with the hegemonic, oppressive forces of the world and the absurdity of the human condition that subsequently arises therein. We do this while conscious of the fact that many of these systems are riddled with nuances which give birth to a number of problematics or conflicts (either from within themselves or their proximity to one another), and often times those conflicts are reflected in our own viewpoints as individuals and our individual relationships to the histories or systems to which we are bound or ascribe (eg British, American, White, Black, Marxist, Christian, etc). I, for example, am the only member of the band who would identify himself as a Christian and within the context of Algiers, this means an open and honest discourse from both sides of the issue. This aspect of the discussion within the band is balanced upon a crux that runs the tradition of belief wherein faith is intertwined with doubt.

We try to sculpt our live experience into a place that encourages group participation and as a place of congregation where like-minded people can come together in the face of oppression for the purpose of looking toward a better day. We acknowledge that while much of this practice comes from punk rock, it is mostly rooted in gospel traditions and the black church. Ours, however, is a secular music. It is not anti-religious but neither is it praise music. It is a social music for social empowerment. We are interested in what Dr. Cornel West describes as the” freedom fighter who engages in the fight for intellectual, political, social, and existential freedom,” and this is an idea that transcends the borders of religion, race, and nationality. The idea of plurality is central here.

Following on, you've said you wanted 'Cleveland' to “sound like the Final Judgement in the Bible, wherein the wicked are judged and condemned by the righteous with all the ‘weeping and gnashing of teeth,’ of the damned when justice is finally realized.” That's quite an aim and a manifesto. How close do you think you got?

FJF: We’ll have to wait and see.

MT: I think I’d settle for steadily growing our audience to the point where can give ourselves the time to further develop some of the themes of the first two records and to generate new ideas. Making good work often feels like pulling teeth so it would be nice to do a record where we could hit the ground running and pull all of our teeth out, quickly, perhaps in the space of a couple of months.

The Underside of Power is out now via Matador Records. For more information about the band, please visit their official website.