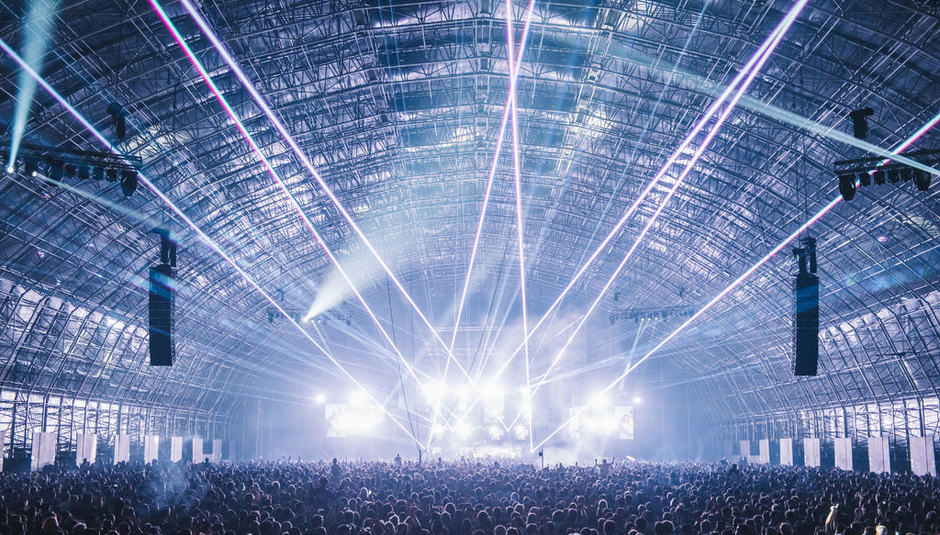 In the course of its first decade, no edition of Field Day has had a headline set as hyped as that of Richard D James in 2017. Such is Aphex Twin’s current cache that in spite of seven impeccably programmed stages running 11 hours apiece, his appearance was raised to singular import. This was an Aphex-branded event right from the get go. On the t-shirts of his adoring fanboys, his logo was all over Victoria Park long before he projected it on multiple screens. He had his own personal merch stall, where those smart, keen or lucky enough to turn up early could purchase an exclusive vinyl and spend the day fending off those AFX addicts who’d missed out before it sold out and wanted to start the secondary market right there in the field.

By demand, Aphex Twin was also built a massive indoor stage – no doubt with the full approval of all those who attended last year’s sodden affair. On this gloriously sunny year, The Barn could feel gloomily uninviting. It was frequently likened to an aircraft hangar, but I’ve been to festivals in aircraft hangars and I can tell you it was a damn sight bigger than that. It seems a surprise, at first, to see Marcel Dettmann’s precision-engineered techno workout so sparsely attended. A wander into the cavernous space reveals there are some two or three thousand revellers barely filling a quarter of the arena’s capacity.

Dettmann’s isn’t the only masterful set that struggles to find an audience. Lena Willikins’ hour and a half in the Bugged Out! tent stubbornly builds from minimal beats to a flaring techno before ending on a synth high. But her wizardry is better suited to a captive club crowd than one which has ABRA’s dirty bass-wobbling R&B hooks, Wallwork and TVSI’s four-fisted production punch, Beak>’s retro futurist motorik, the aforementioned Mr Dettmann, a sunny day, and a lot of very impressive beers, all in a two minute radius.

Gaika too deserves more attention. His magnificent genre-slipping songs make him Warp’s canniest recent signing. With angry dancehall-flecked anthem ‘There Will Be Blood’ he once again he proves his live chops, but the crowd is largely unmoved. In the spacious Resident Advisor stage however, Forest Swords makes the most of the afternoon. In front of crisp videos images of flowers and slow-moving bodies, the gradual, dubbed-up, bass-heavy productions of recent record Compassion flow into the space with a claustrophobic menace.

This intensity in unmatched over the course of the day. Death Grips’ trademark aggro is delivered with typical ferocity to a pumped up crowd but in an outdoor space the trio’s treble-heavy sound lacks thunder. Often an afterthought, Bleep bring some heavyweight DJ names to The Bandstand this year on, including Ikonika, Kode9 and, improbably enough, Mike Paradinas. All bring their A games.

Earlier on, the disappointment of a no-show from Idris Ackamoor and the Pyramids (due, it was claimed, to a grounded flight), is eased by the dusty desert blues of Imarhan. The Algerian collective’s slow driving rhythms and weaving vocals, sung in the Taugeg language Tamashek, were a sheer joy. Similarly, Syrian singer Omar Souleyman, tragically in exile for more than half a decade now, has lost none of the chaotic fervour that has made him a festival favourite for twice that time.

So what about that Aphex Twin show? If you care, the chances are you’ll have checked it out for yourself, even if you weren’t there, via NTS’s now-archived livestream . It was rampantly self-indulgent, comically undanceable, and occasionally a little dull. Spewing styles then ravenously cannibalising them all over again, it also managed to be epic, visceral and occasionally incredible. Delivered with a panache and showmanship rarely associated with a man in darkness looking down, it was a worthy headliner of an impressive day.