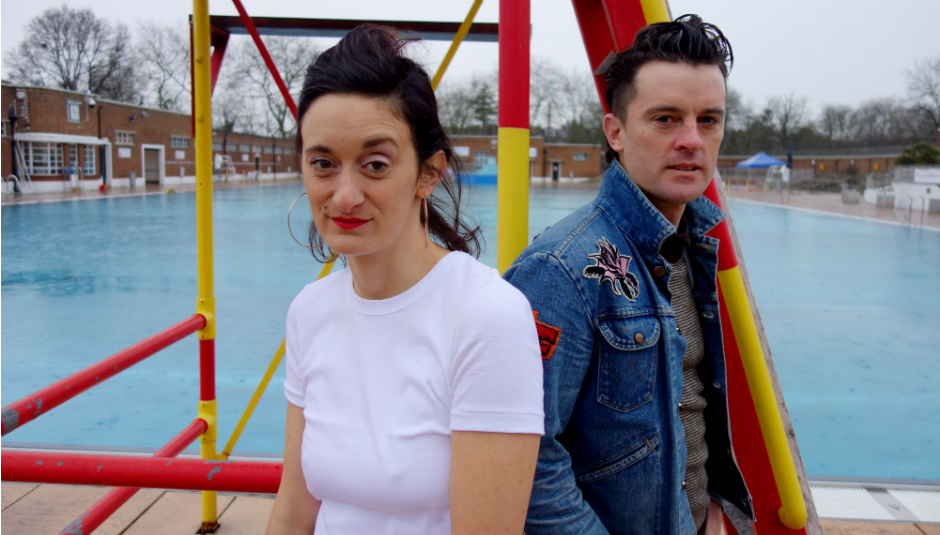 In July last year, Nick McCarthy announced he was leaving Franz Ferdinand, of which he’d been a founding member back when they emerged from a scene that was centred around the Glasgow School of Art in the early noughties. The parting was evidently amicable and the takeaways from the joint statement from McCarthy and his erstwhile bandmates were threefold; it might not necessarily be a permanent split, but McCarthy couldn’t commit to touring because he had a young family and wanted to focus on production and creating new music of his own.

What we couldn’t have gleaned at the time, though, is that his family and his different creative ambitions were intrinsically tied. McCarthy and his wife, Manuela Gernendel, have been together since before Franz Ferdinand were a going concern; they met in the late nineties in Bavaria, where they both grew up, and were married in 2005, on the same day as Live 8 – which explains why the band turned down an offer to play there. Gernendel is an artist who studied painting in Glasgow at the art school and has taught the discipline herself, too.

She doesn’t have much of a musical background, or at least not beyond Box Codax, the group she formed with McCarthy and a couple of others back in her student days. “That was a different setup,” she explains over the phone from Germany, “and Nick and I weren’t really the main characters in that”. The couple would occasionally perform together at openings and parties, with a running joke between them and the other members of Box Codax being that they only ever seemed to play together around Christmas time, which was usually the only point at which Franz Ferdinand would be off the road.

Quietly, McCarthy and Gernendel had always worked, in fits and starts, on their own songs, too. “We had scraps sitting around, just of half-finished songs, but we never had the time to finish them – we were always so busy with our own stuff,” explains Gernendel. “We didn’t always work easily together anyway, even when we did have the chance; in the past, we’d get into rows quite quickly.”

Things have changed, though; for a start, the couple have a young son, Vito, and are more settled than ever as a result. On top of that, their musical collaboration has finally borne fruit; they’re now officially a band, simply under the name Manuela, and have a self-titled debut record to show for it. It’s a delightfully eccentric affair, flitting between hazy electro and sixties pop, with even a dash of dub at its close. The whole album has a summery feel running through its veins, and Gernendel’s lyrics – cryptic one minute, wide-open the next – reflect sweetly on parenthood and sadly on society. The record feels like a considered, cohesive piece of work, but for all McCarthy’s talk of moving onto new projects, he hadn’t had this one in mind at the time.

“It was more of a surprise, really,” he recalls. “I was working on a few things, like a score for a German TV series called München 7, so this wasn’t my main focus to begin with – it was just that we’d sort of agreed to record it because we’d been working on the songs for so long. It ended up turning into something special as we went along, and some of the other things I was working on sort of fell away. I’d been dabbling with writing with other people really spontaneously, a bit like musical speed dating, but none of them stuck like this album did. I was just really enjoying the whole process.”

Gradually, they came to realise that they had enough songs to release an album, but it wasn’t all plain sailing; amongst the roadblocks they had to deal with along the way included one track that had to be scrapped for falling well short of the standards of the others, and another that was a cover of a song by an Italian composer, who eventually decided he didn’t want to clear them to use it after all. Plus, by McCarthy’s reckoning, Gernendel didn’t realise quite how involved the process of putting out an LP would turn out to be. “For a long time, I think she thought of it as an art project or a spoken word thing, and on the other side of it, I was just focusing on coming up with these compositions and ideas for songs. In the end, we managed to find a middle ground, so it feels really genuinely collaborative. That was true of the production of the album, too.”

Gernendel’s contribution to Manuela, then, is one very much rooted in her history as an artist. “The main thing they teach you at art school now is that you should have a go at different things,” she says. “Base it all on ideas, and then work the technical things out later – or not at all. The starting point would be almost spoken word, and I wanted it to be really simple and stripped back. Eventually, you realise that it might sound like a good idea in your head, but in practice, it’s unlistenable. You have to look for other ways to create the atmosphere you want to deliver, so a lot of the conversation was about melodies and instruments.”

The couple have lived in London for years, and they’re vague on the reasoning behind having moved there in the first place, almost as if they’re not quite able to put their finger on it themselves. After all, they don’t have any ancestral links to the place – McCarthy was born in Blackpool, Gernendel in Austria – and they’d said in the past they never expected to stay there for as long as they have. Similarly, they both agree that their surroundings in the capital influenced Manuela, both for better and for worse, but the impression you ultimately get is that they still aren’t completely sold on the city they’ve called home for so long.

“It goes back and forth between being in the haze of love and admiration for the small things in London, and the realisation that’s kind of crumbling and falling apart around you,” admits Gernendel. “I first noticed that political side of it when there were huge demonstrations when the student fees went up, and nobody took any notice. They just passed it through all the same. We were going into the studio around the time of the vote last summer, so there’s some of that shock in there, too. London can be a really unjust and hostile place to a lot of people, but it’s got an amazing mix of cultures, and it feels very free in that respect. Growing up in Bavaria, everything’s so orderly and well kept, and there’s always somebody looking over your shoulder. In London, nobody cares – nobody’s got their eye on you all the time, which I like.”

“It’s strange that we’ve been here as long as we have, because the done thing when we were in Glasgow was for people to move down here for a bit, and usually come back hating the place,” McCarthy laughs. “Have a look around and go: “Nah, not for me”. A lot of the lyrics focus on mundane, everyday things, but there’s an underlying tone of decay. The feeling you get in London, and the UK in general right now, is pretty grim, but I think you always have to look for the positives. I like the fact that you can have a Somali breakfast, Caribbean lunch, and Turkish dinner and never leave the same street, that kind of thing. No other place on earth is as multicultural, but you balance that against the fact that people are struggling to make a living creatively; a lot of our friends are moving away because they can’t afford it anymore, and you’ve got great clubs like Passing Clouds being threatened with closure.”

Whatever their reservations, the pair seem happy enough to bring up their young son, who was born in 2011, in London, and their transition into parenthood is movingly chronicled on Manuela, especially on the gorgeous lullaby ‘Invincible’, on which Gernendel croons, “There are crumbs between your fingers and milk on your tongue / There is grass and there is milk, and love / You’ve made me invincible.” It represents another way in which McCarthy’s two chief reasons for leaving his old band have overlapped; he’s making new music that just so happens to have his family at its emotional core. “So many of the lyrics come out of those little things you have to concentrate on every day as a mum,” relates Gernendel. “I quite like the idea that if we’d made a record ten years ago, it would’ve mainly been songs about love and how much we missed each other when Nick was on the road, but now that’s all changed. We still wrote love songs, but a lot of them were addressed to our son instead.”

Both McCarthy and Gernendel seem to be leaving the door open in terms of what the future holds for Manuela. They each have other projects to focus on, and McCarthy isn’t officially closing the book on Franz Ferdinand forever either; the statement at the time was at pains to point out that his departure wasn’t necessarily permanent, and applied mainly to the band’s fifth album and the touring of it thereafter. He reaffirms that he might rejoin the fold one day. “Maybe they’ll realise, ‘Hey, it’s great without Nick!’ We’re going to see where everything stands in a few years. Who knows, maybe they’ll want a break from the band once they’ve finished touring in a couple of years’ time, right when I’m ready to go back!”

In the meantime, he and Gernendel will play sporadic live shows in support of Manuela, with more extensive touring ruled out by the fact that they are, after all, young parents. “The gigs we’ve done already have been really special,” says Gernendel, “but we can’t go away for too long, no matter how willing the grandmas might be. We’ve got a really good band who we get on really well with, though, so we’re just figuring out what we can do from time to time. We know we can do weekends!”

Manuela is out now via Lost Map. Manuela play Field Day in London on June 3rd. For more information about the band, please click here.

“Nostalgia is in vogue because everyt...