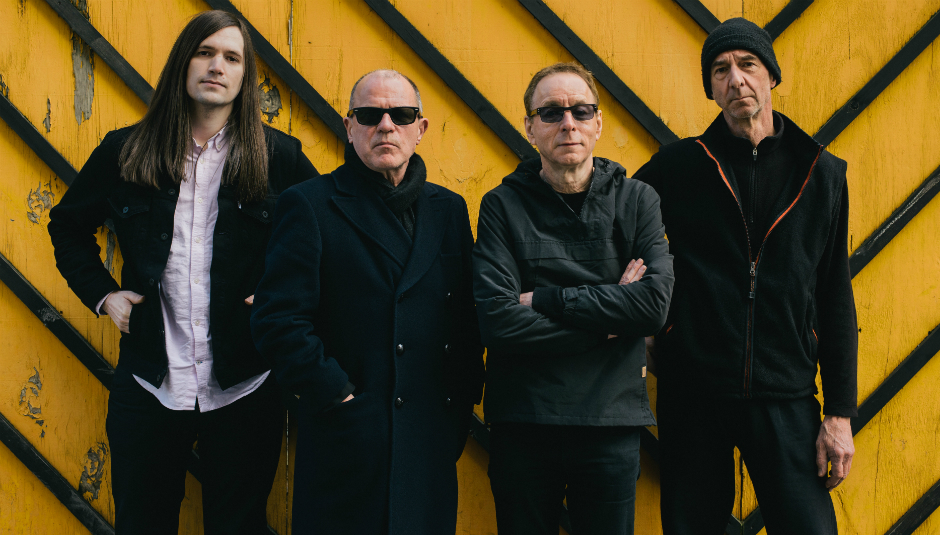 For 40 years, post-punk pioneers Wire have been utterly uncompromising in their art and their vision. The 15th studio album, release at the end of last month on their own Pinkflag label, is no different, showcasing their insatiable appetite to push boundaries and explore the limits of their creativity.

Colin Newman and Graham Lewis gave us an in-depth look at how it all came together and how they work in the studio.

Playing Harp For The Fishies

Graham Lewis: The title comes from the same draw as “wearing concrete slippers”, a mafia euphemism to describe the unexplained disappearance by the assassination of a “friend”…as in “Hey! You seen Joey recently?” “NO! I heard he was playing harp for the fishes”. Several other bodies and deaths occur in this opening toe-tapper. The violin motif is a manipulated field recording from a Wire trip to Moscow.

Colin Newman: Normally the songs that Graham brings to the studio arrive with a text & a vocal melody, but this one arrived with just the text and a violin sample. We worked it up in the studio. I came up with a somewhat illogical chord sequence in three parts, which follows a strict cycle which everyone slotted around. Initially, Rob’s pattern consisted of just kick & hi hat but after a while, this felt too minimal and a hi-hat was added. The intro, which is what makes it a good opening track, was really an attempt to get the track out of sounding too much like a series of cycles. Sometimes those things just work!

CN: The only fast track on the album.

In those songs where Graham writes the text and I write the song (which make up 80% of Wire’s output) I will have the text before I write anything, then when I write the song I’ll grab whatever texts I have from Graham and see if they fit. This one he had written out in an unusual way, listing the verses at the beginning and then putting the chorus at the end. I had the hold (the single chord that plays on the intro) and the verses and they seemed to fit without the need for interjecting a chorus in between so I thought it would be amusing to literally follow the way the text was written out and save the chorus for the end. I put the stop partly to indicate the division between the verse section and the chorus section, and partly because the chorus doesn’t actually flow very well musically from the verse. It was unanimously chosen as the "lead track" by the entire promo team.

GL: I conjured two phrases from the air…"Indian Queens paddle dugout canoes" and "Skippering a skiff, in the typhoon season". A narrative describing and embracing chaotic and unpredictable times….drug deals on the Frankfurt Express. A Momentarian Anthem. Presented as 4 verses followed by a chorus, this was the song form Colin adopted.

CN: One of two songs (the other one is 'Sonic Lens') which began life in a rehearsal room when I was rehearsing with Malka’s band Minimal Compact back in January 2016. Unusually I developed the chord sequences but did not have any text on hand to complete the songs, so I just remembered how to play them. Normally Wire tends to have its muscular pieces and its pop pieces. I don't think we ever succeeded before to combine them in one song before, so I was really pleased to have pulled this off in the mix.

GL: A remarkably optimistic song where the language of Tarot and astrology is mercilessly manipulated to produce a prophetic hymn to a TREX-like boogie. “Keep your mind open / Be willing to change”

GL: A song I wrote ten years ago. However, such was the strength of my feelings of betrayal and disgust at the time of writing, it remained concealed until now.

CN: One of the traits of this album is that a lot of the pieces are either mid-paced or very slow. In terms of innovation within the band, the very slow pieces are definitely a new direction. ‘Harpooned’ is slow but full on. There are pieces are on this album such as this one which are both very slow and stripped down with very simple bass lines playing only on the one of the bar. In some ways, they are a kind of revelation, giving acres of space for subtle rhythmic interplay. Sonically, they are also really great to mix as “space” is always what makes pieces sound big and opens up the picture so you could almost walk into it.

GL: Do you have one? This is the question one should always ask oneself in these times of post-truth, casual racism and nationalism…be prepared! “Have you got a friend to call on?"

CN: It felt like I hung on to that verse riff for weeks! Sometimes little three-note combinations can do surprising things harmonically. For the last few Wire albums I usually turned up with demos (just me and the acoustic guitar) to the sessions; nobody from the band hears them before we reach the studio. It seems to work better that way, as the initial responses to the material tend to be the most instinctive and it’s good to capture them fresh. On this album, there are quite a few where the band actually play along with my original demos, usually the ones with a prominent acoustic guitar. I love the way that this track starts off very small but the arrangement builds through the piece but never relies on anything “standard” to flesh it out.

GL: An autobiographical Wire song… “Our eyes are fixed upon the crown / We wore it once, It didn’t fit / We couldn’t make good use of it”.

GL: It’s said that life’s a bitch and then you die…a song about what to do to get by in-between.

CN: This one & ‘Forever & A Day’ were both songs where Graham arrived with a text and a vocal melody courtesy of his own demos. In fact, I seem to remember a version of this dating back to at least 2008. I usually try to find a chord structure that will give a bit more life to the voice, almost like a remix where you just have the voice but change everything else. What then takes this one up to the next level is the interplay between my very simple guitar and Matt’s parts which have an almost blues like feel but can never be “actual” blues because of the very un-blues like chord structure.

CN: Another super slow one which also started life in my studio. The basic acoustic guitar riff is, in fact, two parts, a simple riff, and a chord sequence. They work together in an almost hypnotic way and given the acres of space the arrangement conjures they are given room to be heard. Matt always manages to bring an instrument to the sessions that has never been used on a Wire album and on this one it’s an autoharp. Just single strums rather than a rhythm. I love the way in which it manages to be acoustic led and sparse but also super heavy. That’s a combination I don’t hear a lot of in music.

GL: More life and death with a nature watching chorus.

Sleep On The Wing

CN: Graham doesn’t necessarily deliver all the texts ahead of the sessions and he handed me this one during the sessions. I had been fiddling around with my synth and had come up with a chord sequence. I tried singing the text along with it and it seemed to work so we just went for it there and then. It’s actually the first song I’ve ever written for Wire on keyboards. It’s definitely a set of changes I wouldn’t have come up with on guitar, even though it is perfectly possible to play them all on guitar. There is starting to be a little history of songs that I've either written in the studio or in rehearsal rooms when the band are all present, but I wouldn’t rely on it as means to do a full album though!

Normally when I write stuff on guitar there is always a rhythm in what I play, and this will inevitably influence how the arrangement develops. However, in this one, as the basic instrument is an organ playing held chords and to be honest my skills as a keyboard player are quite rudimentary, there is no suggested rhythm. I wonder if this is the reason why Rob chose a more jazzy type pattern than is customary for Wire.

GL: A spontaneous piece. Musically put together in no time. Appeared like ‘Still Shows’ on Ideal Copy. Swallows fly for years without touching the earth. Fish in the darkest depths wait an eternity to eat and to breed. The last verse is a memorial to a recently deceased friend, Pat.

CN: Another of those super-slow, stripped, acoustic led tracks that started in my studio. Probably my favourite track on the album. It’s got such a moody quality, heavy without having anything in the arrangement you could call heavy. The harmonic interplay between my & Matt's guitars is especially good in this piece. You hear each part distinctly yet everything holds together really well.

Title tracks are an odd thing; sometimes we have them, sometimes we don’t. Not all song titles work as album titles. This, however, felt especially fitting for an album we would be releasing on our 40th anniversary. I don’t imagine Wire ever getting any kind of medal for achievement; I mean 40 years of doing what we damn well like and confusing the hell out of people is not the conventional path to glory or societal reward. On the other hand 40 years is worth at least mentioning. Does the cloud have a silver lining or are the skies just leaden?

GL: The Mexican drug cartels believe every problem may be solved with Silver = Money or Lead = Bullets.

Live life to the full.

Silver / Lead is out now via Pinkflag. For more information on Wire, please visit their official website.

Sisters Are Doing It For Themselves: ...