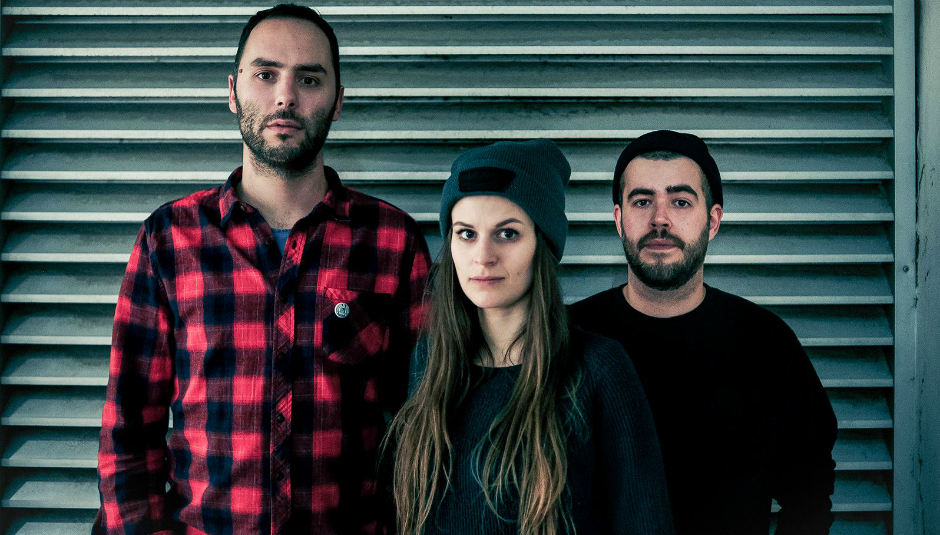 Sometimes a band hits like a hurricane, like nothing you’ve heard before. Somehow a band can bring something you’ve always wanted but never found, as though they read your subconscious and combine individual styles you’ve always loved and now… here they are in one swirling, undeniable, tidal wave. Belgian three-piece Brutus are one such completed puzzle, mixing as they do hardcore punk, death metal, shoegaze, indie and so much more that has the metallic taste of blood in its genesis. Burst, their debut album, recently dropped over here on the impeccable Hassle Records. It’s incredible. Two huge fists in the face, one landing with the grace and precision of a heavyweight fighter, the other wrapped in a hazy chloroform-doused t-shirt, at once invigorating and disorientating. The band have just wrapped up a UK tour and will be returning in August for the ArcTangent festival. DiS did some electronic pen-palling with the band Stefanie Mannaerts (vocals and drums), Stijn Vanhoegaerden (guitar), and Peter Mulders (bass); the results are below. Listen to Burst. Please.

DiS: Could we get usual background spiel please; how you formed, what brought you together? It seems that Stefanie was a presence on the Belgium hardcore punk scene and prior to this, Peter you were a reputable Refused fanatic. What is Stefanie’s story before Brutus and how do you think her arrival helped you moved to a band?

Stefanie Mannaerts: In some way, we were all present in the local punk and hardcore scene. Stijn and I played in a punk rock band together, and I met Peter in a Refused tribute band. We all had our bands and projects before and in-between. But when we started Brutus, it was something new for all three of us. We tried to find a singer, because I was just the drummer in the beginning. But that didn’t work out, we couldn’t find anyone suitable, and we never actually had anybody else even try. So now this is it.

Belgium is a hugely overlooked artistic force in music these days. From a skate-punk perspective alone you’ve Flatcat and For I Am, two hugely talented bands – but can you tell us more about the music scene you’ve experienced in Belgium, and how it’s influenced you?

Peter Mulders: Wow, you are a Flatcat fan? They are great guys and I’ve known them for like 15 years, I think! Amazing.

Yes, Belgium is an awesome scene. I don’t think we, or a lot of the other bands, even know how lucky we are to have this. Belgium is so small, it’s more like one big city. Everything is so close, and every city has a cool, open-minded scene of his own. In some way, you always look up to the first bands you go check out live when you’re young. Or the bands you play with and blow you away every time, again and again. I don’t think we are influenced by genre or style, but more so by the love and dedication all the bands are putting into their music. A lot of sparks make a fire, you know? And it’s cool to be a part of that.

SM: I have a sincere love for black metal. But I would never say that we are playing black metal whatsoever. It is just natural for me to fall back on stuff I love. I also don’t play a classic blast beat, I just made it work for me. I respect every genre’s origin and would never claim a genre. But metal had a big influence in my life, to be specific the melody and tempo of black metal, the non-compromised thrash metal trash drums and the intensity of sludge is all I need. And maybe some Fleetwood Mac for my inner balance.

Possible tangent and wrong path here, but the song ‘Bird’ recalls several Twin Peaks/Fire Walk With Me motifs – the title being comparable to the motif of the nightingale and mention of walking with fire. Similarly, there are some wonderfully surreal moments in the ‘All Along’ video, a floating melange of disassembled sculptures, and Twin Peaks has its own array of sculptures. Are you surrealists, and is Burstan expression of surrealism?

PM: Wow. To be honest: no, no, and no. But yes, of course we love David Lynch, like everybody should love his great work. But the link with Twin Peaks and Fire Walk are just coincidence, I think. Although, we had several nice ‘poutine’ diners in a great Twin Peaks bar in Vancouver when we were there to record our album. So maybe he did find his way into our music. And about the ‘All Along’ video, we gave total freedom to Charles De Meyer, the director of the video. So that’s all up to him.

People are very interested in Belgium as the home to the central political mechanism of Europe. So what is it like living in Belgium? Is politics all-consuming? Do you have an opinion you’d like to express on Europe as a concept and as a political mechanism? Does politics come into or have an expression within your music?

PM: Living in Belgium is pretty cool, it’s not that bad over here. And I don’t think politics found their way into our music. Although I like bands that do make political statements, I’m happy we’re not… yet. For me, playing music is one of the moments to escape from the silly world of politics. And about Belgium politics, it’s pretty crazy over here. Yes, I read about the UK and Brexit, but hey, we have six governments and four parliaments, three official languages, and nobody understands each other and all they do is fight, fight, fight and take really stupid issues to long debates. With Brussels being the centre of Europe, we do feel European, I think. But also Belgian and Flemish - our ‘region’. But more than 30 percent of the Flemish people voted for a party that wants to separate the country into two parts; a mini-Brexit, like a Flexit. So, well, you can see it’s not easy over here, politically.

It must be nigh-on impossible to play drums like that Stefanie AND sing. Do you have a routine or series of exercises that help with that kind of cognitive co-ordination?

SM: For the past few months, my routine for a show is almost always the same. Before that, I was still in denial that I am also a singer and not a drummer who sings. So for these past few months, my ritual is slightly different. I’ve always warmed up with paradiddles on my drum chair to have as little rebound as possible. Single strokes and doubles. Now, for warming up my voice I start off with just normal scales. First on “a”, “e”, “o”, from normal volume to loud volume to soft volume. This singing warm up is still new but I feel there is some slight improvement.

It’s cool that you cite there’s plenty of healthy conflict in the band. People who haven’t been in bands can’t always empathise with how painful it can be to have a song and with it the ‘vision’, and to have it open to all manner of interpretations and alterations. So what causes conflict for you as band members? Is it the need to see your respective visions through to completion at any cost? And how do you feel having wider audiences pass judgement on your work, be it good or bad?

PM: Well, I have been in other bands too, and most of the time it was within one genre - punk rock - or with one ‘leader’ of the band that wrote most of the music. I’m not saying that is easy, but that is different to what Brutus is to me. We all try to write in some way. Stefanie is more into notes and rhythm, Stijn into melody, I am into structures and catchy-ness. It’s not like one person wants to push his or her vision, it’s not like that; it’s more a constant search to push the limits of what we want and like. Being good friends makes that even harder. You can pitch an idea, but you also want your friend to feel good about that idea. It sounds complicated, but we’re just a normal band, haha.

Final question, where on the spectrum does your music lie between pain and ecstasy?

Collective: Close to the avocado and the fluffy sweater.

Brutus is out now via Hassle Records. For more information on the band, including upcoming tour dates, please visit their official website.