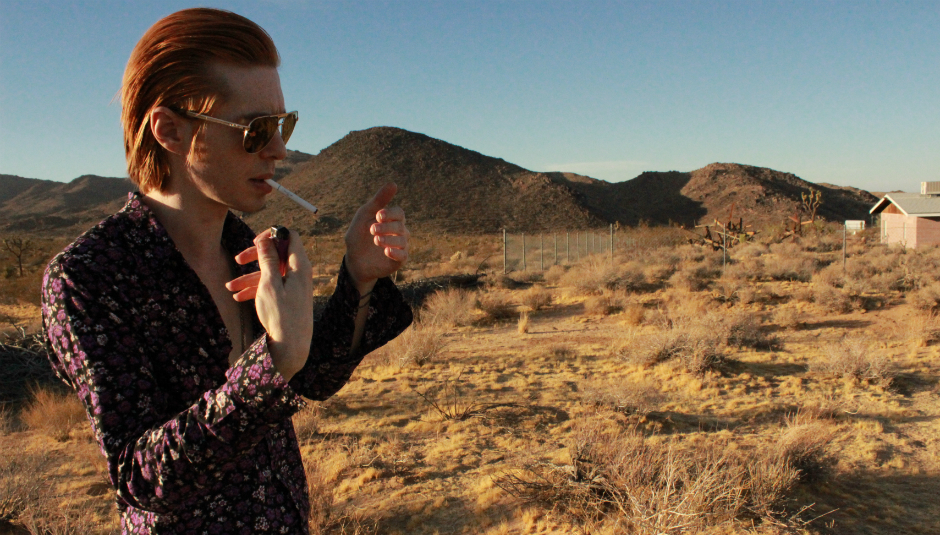 This year I am going to be releasing an unprecedented amount - by my standards -of music and films. About 40 new songs have been recorded over the course of 2016 and are now still evolving in 2017. The collection is titled HOLY WAR and is a break from the band format that I have used in the past. Although some of the same spirit is evident as marked in earlier work, HOLY WAR pushes my music into much more extreme and innovative territory. Every step towards this outcome has been natural, a reaction towards changes in my life and in the world we all live in now.

First, I quietly broke up my band The Icarus Line due to several fateful circumstances. My longtime collaborator, band member, and best friend, Alvin DeGuzman, was stricken with a very serious form of cancer. This shook me and the rest of the group to the core. The disease robbed him of his ability to walk on the eve of a tour supporting Scott Weiland.

These dates seemed doomed from the start, but the band tried to fulfill its commitments even though it felt like we were wrong for the bill and in rehearsals we felt horribly incomplete without Alvin; it felt like a sin to be performing without him.

On the few shows we did play, I witnessed a great performer killing himself for a few bucks that weren’t being spent to his benefit. I also saw how the modern rock community functioned – the audience came anticipating performers failure as much as their success. Perhaps even more so.

It made a deep impression on me. It made it painfully clear that I and my art didn’t belong, a hard realization for someone who had already dedicated a good portion of his life music rooted in rock n roll.

Over those few evenings, I realized that what I was witnessing wasn’t rock n roll at all but a pageantry of convention being exchanged for the few dollars that kept the tank trundling onward. It had become a cage you willing entered in order to sell a couple t shirts...if you’re lucky.

I was drawn to making music because of its immediacy and freedom of expression and the opportunity to move the artform forward. That was the true romance of it. The crucial thing was to make a truthful and contemporary statement, not how popular it might make you. But then interpersonal politics became the main focus and the art started to fade into the background. I never compromised my musical vision, but that trajectory in those circumstances became my burden And it put me into a personal crisis.

Without fanfare, I disbanded the group. Then I paced around my yard, chain smoking for a month.

For the last few years, I had been compiling beats at home when everyone else was asleep. This had nothing to do with blazing a new career path and everything with being happy, making music. Then when I heard Bowie had passed I decided to try singing to them.

I brought a beat into the studio and went free on it. Light bulbs lit up in my head. Incorporating my love for black music was always a tricky prospect in my group. There were rules. On my own, there were no rules. I soon formulated the goal to make music that could be performed solo.

The HOLY WAR body of work doesn’t utilize the conventions of mainstream rock but to me, it holds much in common with the rock & roll music that I love.

I have decided to use elements of modern pop, even its clichés, to build this new house. These are sounds you might hear on the radio filtered through an art-punk consciousness. These are the conventions of the Establishment hijacked so rock & roll can be art again.

I spent a good deal of time making a record with Annie Hardy in my studio; she had life-shattering circumstances all reflected in that music. In between the sessions with her, HOLY WAR was taking shape: Heavy and Beautiful; Noise and Melody… conjured in my laundry room with samples, found sounds and software. Conventional instruments mostly collected dust.

It’s been a bitch to connect with a part of myself that was waiting to express itself for a very long time. It’s been a fucked up year or two, and distilling that into music that I would be able to share with people hasn’t been easy. My pal, Ariel Pink came to the studio one day and genuinely seemed to enjoy my new music, then said it reminded him of Beyonce! Sure, why the fuck not!

This collection will be released over the course of the year in various formats and volumes. Film, music and custom lighters. HOLY WAR is a whole new chapter in my life and the first where I will perform under my Christian name: Joe Cardamone.

Joe Cardamone will be performing at the Old Blue Last on the 16 March. 'Out Of Road' is available now as a free download from his offical website.

Fierce Panda: Please Look After This ...