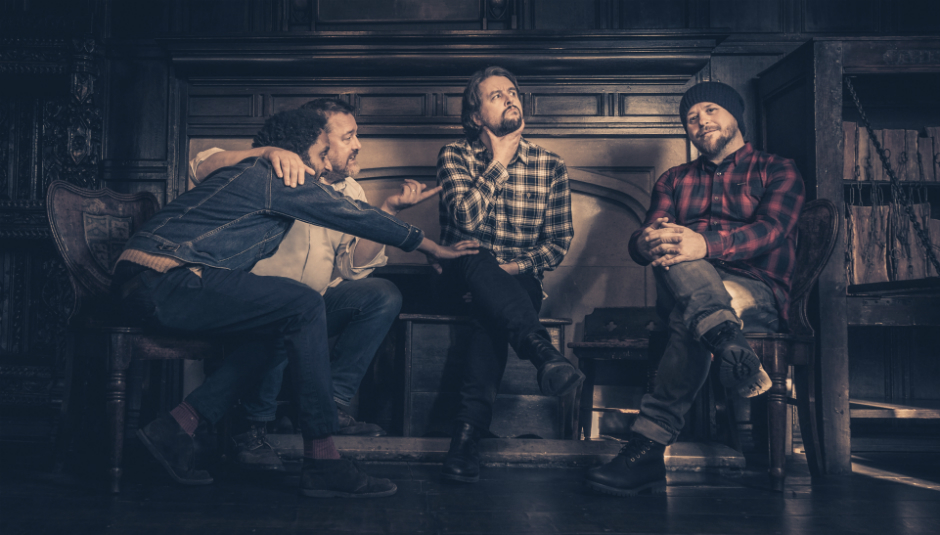 Elbow have never wanted much for instrumental diversity but their seventh record, Little Fictions, feels like a different beast altogether from anything that’s preceded it in the band’s catalogue. The departure of drummer Richard Jupp has, funnily enough, resulted in arguably their most beat-heavy record to date as they strove to compensate for his absence, with producer Craig Potter and bassist Pete Turner returning to their roots to mine the same sort of territory as they did on their debut, Asleep In The Back, when a love of trip hop and DJ Shadow were major influences. Elsewhere, the title track simmers minimally towards an explosive landscape change at the midpoint, whereafter wave after wave of feedback, reverb, and loops conspire to summon up a veritable maelstrom of sound. After twenty-five years in the same band, the individual members have long since settled down into set roles; that’s especially true of Craig Potter, who reprises his role behind the desk on Little Fictions for the fourth record running. With the album riding high at the top of the UK album chart, Craig, his guitarist brother Mark and Turner run us through their individual rigs, incorporating everything from £50 guitars to bags full of firewood. 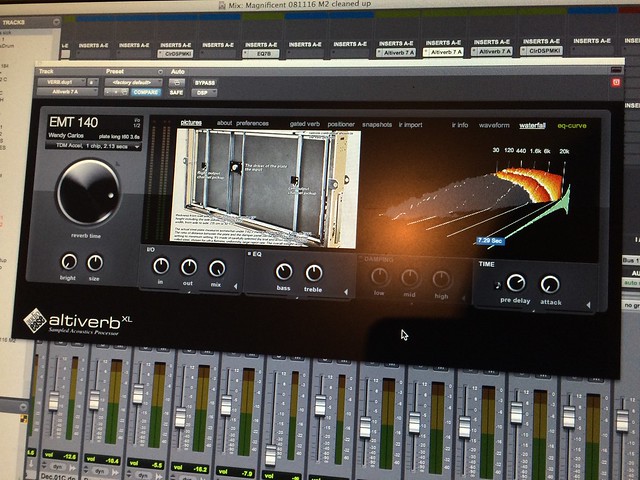 One of my go-to bits of gear when mixing is the Altiverb EMT 140 Wendy Carlos plate reverb. It's by no means the only verb I use, but if I'm not trying to sit the various elements in a room that others are sat in, then this is pretty much what I get up first. I'll often use the pre-delay that comes with the plugin, or put my own delay in front of it. If I want something with a little more movement, I'll chuck a tape delay before the Altiverb. It's a really lovely reverb. We’ve also used Altiverb to make an impulse response of the big room at Blueprint, which has come in handy now and again as we have used that room quite a bit over the years.

We used a pair of Coles 4038 ribbon mics in a Blumlein (crossed) pair for most of the drum recordings – either over the drummer’s head, or out in front of the kit (which gives a very different sound, and we used this mic position for the songs when we wanted a bit more room sound on the kit). Danny Evans, our studio engineer, used these mics in this position a lot for Guy’s solo album and showed me this technique when Alex Reeves , who played on Guy’s album himself, came in to record. The 4038s have a warmth which was perfect for the kit sound we were looking for, and set up as a Blumlein pair, they give an amazing stereo image, picking up the elements of the kit in a very natural and balanced way. Normally the mics in a Blumlein would be set up at ninety degrees to each other, but by altering the angle between the two mics, it’s also possible to affect the stereo width of the recording. 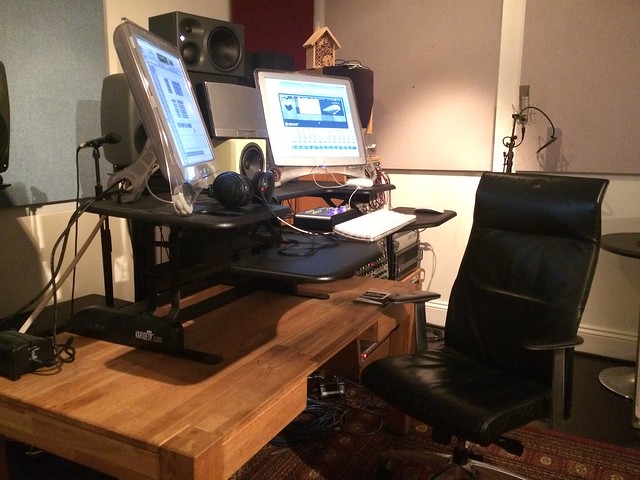 I heard about this via a couple of friends on Facebook who have bad backs, and recommended this as a way of being able to mix for long periods without ending up in massive pain – something I’ve got plenty of experience with! It’s a desk that you can lift up so you can stand and mix as well as lay flat for sit-down mixing. It enabled me to walk rather than crawl out of the studio on many occasions whilst making the album – but there is a downside that I hadn’t thought about. You’re supposed to take a decent amount of breaks when mixing, and sitting down meant I had to do that, but with this, I can mix for a lot longer on each stretch. Then again, the last mixing session on Little Fictions turned into a twenty-two hour overnight marathon, so it probably saved me from a fair amount of physical pain. It also means I can do a little dance when the mix is going well. That’s how I know we’re getting there, when the little dance starts coming in.

My workhorse guitar. It’s the first guitar I always plug in when I’m looking for a sound. I’ve played it for so many years that I know what I can get out of it most of the time. I’ve had this one for about eight years. The first Elbow album it’s on is Leaders Of The Free World, and it’s been on every subsequent album.

It’s a reissue of the one that George Harrison used to play which I got as we were coming to the end of recording The Take Off And Landing of Everything. It’s such a lovely guitar. Aside from tone it has this wonderful dampening system operated by levers, and it gives you a great muted sound.

You hear this at the beginning of ‘Kindling’. I played the riff that we then looped to create the track, but forgot to tune it. So when we came back to the track, it made everything that little bit more fun. We tried to retune it in mixing but it lost all of the character, so in the end we decided to go with the original recording and live with it. If you’re being really precise you might hear it but the vibe of the tune was what we needed. That’s something that applies throughout the album, really.

A whole band favourite. It’s a £50 guitar but it has such a soft, balanced, lovely tone. On ‘Gentle Storm’, everyone thinks that keyboards are playing the chords, but it’s actually this alongside the piano and bass. It’s often the first guitar that gets picked up by us to start coming up with stuff.

Most definitely a studio amp. You wouldn’t dare take it on the road and even if I wanted to, Danny Evans wouldn’t let me! You need to service it every two months, but it’s worth it. It’s an amazing amp and the spring reverbs are brilliant - I’ve never found a plugin or pedal that comes close to the sound. You get hiss and fizz because it’s an old amp, which drives Craig up the wall. He likes stuff clean and pure, but I like that bit of dirt in the sound. When we were recording he’d ask whether I had another amp because of the noise, but I held my ground. It has a great tremelo on it as well.

The reliable one. That ability to link channels to mix a clean sound and an overdrive is a real bonus. All through recording I wanted to avoid using pedals where I could use the amps direct, and the sound from this features all over the new album. It just sounds better than a pedal sound, end of!

This is the amp I use with The Plumedores, my blues band. It’s really fucking loud in the studio, so it definitely has its moments. It has two channels, clean and drive, and the drive channel gives you an instant warm overdrive - which is precisely what I like.

I used it a fair bit on ‘Little Fictions’ (the track). The mayhem and craziness at the end of the song came from a wild sample that Craig found, along with me playing. I used this and a piece of hoover tubing, and the idea was to play randomly which is the most difficult thing you can do. I remember Les Dawson playing the piano badly, and later on you realise just how hard it is to actually do that! A friend said the end of the track sounds like galloping horses, and that’s something like what we were trying to get. A lot of sound creation went on in the album and the end of that track is the most obvious example of it. Everything is random on there.

We’re now working out how to do all of it live, which is obviously a new challenge. We don’t often record as a whole band, so rehearsals are where we really hear the songs from the whole band for the first time. In a way, the songs are still being written- we never think anything is finished, so if we come up with something that works, the songs change. The versions on the album are versions, but all of our songs are always evolving. 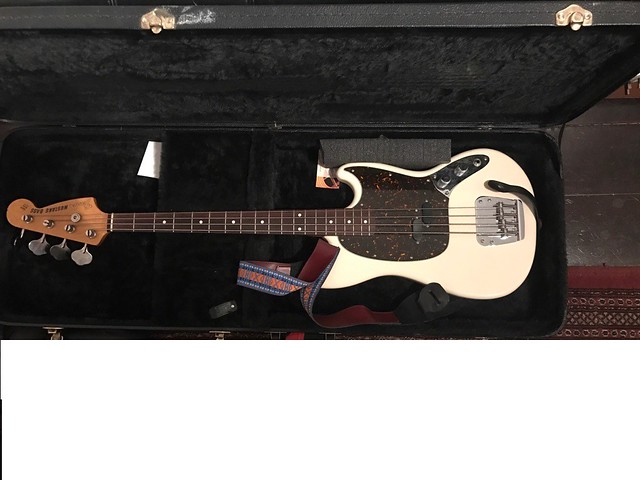 I bought this off Nathan Sudders of The Whip, who also played with Guy on Courting The Squall. It’s on every track on Little Fictions. It’s a really nice, short-scale bass – totally playable. This was the first time I’d used it: on previous albums, the bass you hear is a Fender Jazz. It worked brilliantly for ‘Magnificent (She Says)’, really delivering the sound we all wanted on the bottom end of that tune. It helps that it looks cool as well. I’d like to work it into more of the older stuff and see how it delivers live on those tracks.

A really, really old amplifier. I’m not sure who it belongs to. I found it at Blueprint, hooked up to it, started playing, and really liked the sound. It’s still there so I guess it must be one of the crew’s – I haven’t actually tried to find out. It’s battered and knackered-looking but I love the tone on it, and it fits with the Mustang beautifully. Even though it’s this ugly brown thing, its very naffness somehow makes it cool. It has this flabby, loose sound that matched with what we were looking for on the album, and I got a great clicky tone from it on the track ‘Little Fictions’. Not one for the road – I don’t think it’d survive – but a definite keeper for studio work.

A Bag Of Kindling

We started the album by going off to Scotland for a couple of weeks to throw around some ideas and get back in tune with each other. Before that, Guy had been doing his solo album, Craig had been producing, Mark had been doing stuff with The Plumedores and I’d been writing solo stuff. It was January and the house was freezing, so we had fires going all the time. I dropped a bag of kindling by the fire and we all liked the sound, so we started messing around with it and it became the rhythm backing for the track that ends the album. All through the record we played around with sounds and samples, and that was the first one that we laid down. It’s a nice thing, really; by the time the album was finished, the very start of the work had become the thing that ended it.

Little Fictions is out now via Polydor. For more information on the band, including upcoming tour dates, please visit their official website.