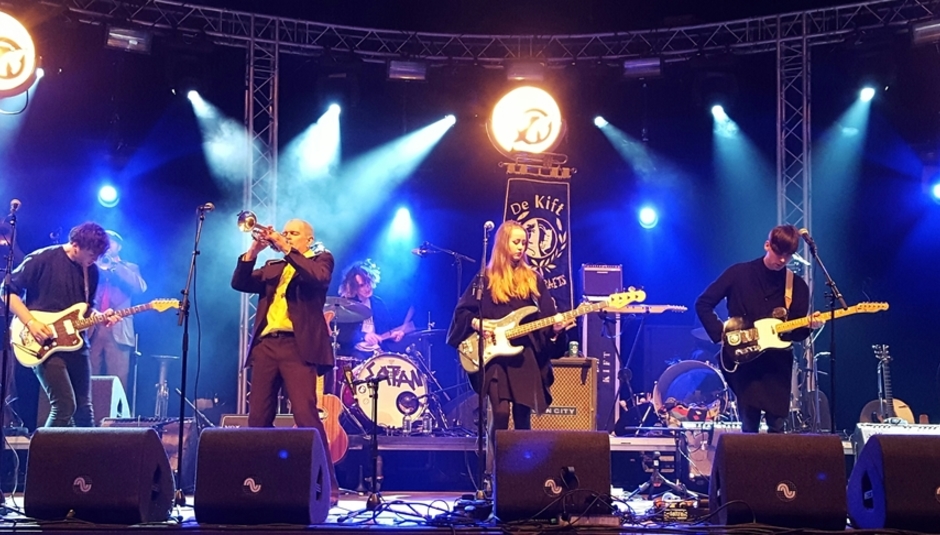 Make no mistake, Eurosonic Noorderslag is the finest new music showcase event on the planet right now. While it might not possess as many big names and therefore be hyped in the same way as South By Southwest or The Great Escape, it isn't as industry heavy either, and most venues are easily accessible at all times unlike the former where block circling queues seem to be the order of the day and night. What's more, the vibe is far more friendly with every delegate from all over Europe bigging up each other's artists irrespective of association. Competition isn't the name of the game here, or one-upmanship, and DiS is in its element mingling with various representatives from the Dutch, Austrian, Portuguese, and Belgian music export groups respectively.

Now in its 31st year, the 2017 edition of Eurosonic Noorderslag hosted an incredible 382 artists from over 30 countries across its three days. Not to mention its sister fringe event Altersonic, which added dozens more performances across its participating venues in a similar vein to Brighton's Alternative Escape.

The festival takes place in Groningen, a city which can boast two of the largest universities in the Netherlands. As a result, students form over 25% of its population, which is partly responsible for the city being a long-standing cultural hive of activity. Split into two parts, the Eurosonic event showcases international acts from Wednesday (11th January) to Friday (13th), while Noorderslag takes place on the Saturday (14th), predominantly showcasing Dutch artists. Although the quality can be a veritable mixed bag, the better end of the scale can sometimes become exceptional, as many acts demonstrated this year.

Having arrived late on Wednesday due to a rail strike (solidarity!) that saw no trains leaving Amsterdam's Schiphol airport before 5pm, DiS arrives at the Grand Theatre (grand in name, grand in stature) just in time for Anna Meredith's set. Having won the 2016 Scottish Album Of The Year award with debut record Varmints the theatre is unsurprisingly packed to the rafters, and in a set where visuals are as important as the sounds, it soon gets off to a heady start. Unfortunately, the constant patter from a group of agents standing nearby discussing their marketing strategy for Clean Bandit (who've just scored the lowest-selling Christmas number one of all time, trivia fans) becomes increasingly off-putting and solace is sought elsewhere.

Namely in the intimate confines of De Spieghel, which quickly becomes our favourite venue of the festival. Hosting bands on two floors, its the larger downstairs room that becomes Drowned In Sound's home for the evening as first Goat Girl then Amber Arcades both strike a blow for female fronted guitar bands. The former's lo-fi punk rock mixes the sassiness of Thee Headcoatees with Fat White Family's nonchalance while the latter, who we first saw in this very same venue exactly twelve months ago, show why in Annelotte De Graaf they possess one of the finest songwriters/arrangers on the planet right now. Amber Arcades also give us two new as-yet-untitled songs as well. The first, tentatively called 'Rock Song' for the purpose of the setlist, is more upbeat in a similar vein to 'Come With Me' or 'Fading Lines' off their debut, while the other, or 'Backlight Haze' as its known this evening, is a waltzing lullaby that owes more to Stereolab or Beach House and as a result, is arguably the more thought-provoking of the two.

The next day, having sat through a day of conferences, meetings, and interviews, the evening's music provides an amiable respite from far too much business talk. Communions have packed a large crowd into the tiny Huis De Beurs venue, and while their radio-friendly take on post-punk ticks all the right boxes prefixed by the word "nice", we're a little unsure whether the world is ready for a Danish version of The Killers or Bastille just yet. Over the way in Vrijdag, Declan McKenna has been described as the new Ed Sheeran, which probably explains why half of Eurosonic is here to see him. We endure one song before going on our merry way once more.

Once again, DiS heads to De Spieghel stopping only to snack out on several delicious Eierbals, the speciality dish of Groningen. Inside, Italian trio Sonars' blend of ambient electro-pop and delicate shoegaze provides a soothing respite from the driving sleet outdoors, while Berlin-based three-piece Tau, the brainchild of former Dead Skeletons collaborator Shaun Mulrooney, take us back to 1967 via South America and Goa with their transcendental psychedelia.

However, it's the seven-headed beast known as Teksti-TV 666 that own the evening, if not the entire festival, with their juggernaut assault on all things loud. Hailing from Helsinki and its surrounding areas and counting no fewer than five guitarists in their line-up (yes, FIVE!), their heavy onslaught of punk rock riffs and reverb-laden shoegaze driven along by motorik rhythms is somewhat akin to Can or My Bloody Valentine playing elongated versions of Ramones or Black Flag songsm, and as great as that sounds, they are a revelation. Every song is sung in Finnish, which only adds to their couldn't-give-a-fuck attitud,e and by the end of the set most of the band are lost in a sea of audience members' flailing arms or teetering above our heads. Beat that.

Friday's daytime affair sees DiS take a tour into Groningen's "old town" courtesy of our friends from Leiden who've visited for the day, while also checking into the excellent Plato Records and its neighboring cafe Coffee Company where numerous Eurosonic participating artists are playing shortened sets.

Sightseeing done for the day, it's left to Siv Jakobsen over in the cosy confines of USVA's salubrious hall to send shivers down the collective spines of those in attendance. Although still relatively unknown outside of her hometown of Asker, the Norwegian songstress possesses enough charm and poise to permeate both the rock and folk markets, while her delicate cover of Britney Spears' 'Toxic' needs to be heard to be believed.

Over on the Eurosonic Air stage, the nearest this festival gets to an outdoor venue and therefore bloody freezing, Rats On Rafts semi-improvised collaboration with veteran art punks De Kift is another incendiary highlight. Which soon makes us forget about the icy temperatures as goosebumps are obtained by other means. Fusing post-punk, jazz, krautrock, and psychedelia, their menagerie of sounds and styles is as eclectic as it gets for a relentless forty minutes.

De Drie Gezusters can count itself as being one of the largest multi-floor bars in Groningen, so it's a perfect setting for arguably Altersonic's key performers. Hosting four stages, DiS takes a trip around all four for the next couple of hours before being suitably impressed by Rotterdam's Black Horse Society and Home Counties psych-gazers Echotape in the process. Having misread the schedule, or maybe just decided De Spieghel was the place to hang out once more, our plans to see Austrian outfit Farewell Dear Ghost inexplicably fall by the wayside and we end up in the middle of a set by a band called Cocaine Piss instead, who win the award for silliest band name of the festival and whose music isn't really up to much either.

Saturday can mean only one thing: Noorderslag. And as with last year's event, this showcase of the cream of new Dutch music is completely sold out, meaning most of the stages in the grand De Oosterport building are difficult to access unless one is willing to queue for long spells. Nevertheless, we do manage to catch the whole of Kim Janssen's set and we're glad we did because it reminds us why he's been held in such high regard by his fellow musicians for so long. Having just finished recording an album with contributions from Eiríkur Orri Ólafsson of Sigur Ros and The National collaborator Marla Hansen, he and his eleven piece band play a grandiose set that the likes of Matt Berninger and Sufjan Stevens would be proud of.

Canshaker Pi are also a revelation, having just finished recording their debut album with Pavement's Stephen Malkmus. This Amsterdam four-piece sound like they could have been around in the halcyon days of 1992 when Dinosaur Jr, Pixies, and the aforementioned Pavement ruled the roost, yet ultimately their presence and persona screams "NOW!!!" in bold, exclamation mark littered type.

Elsewhere, it would probably be fair to say Noorderslag was something of a very hit and miss affair, with hotly tipped Amsterdam-based Norwegian outfit Klangstof disappointing the most, their affected electronica coming on like a three-way collision between Travis, The xx, and Alt-J. It's left to Utrecht's 45AcidBabies to provide a thrillingly engaging climax to the weekend's festivities, their incessant melting point of punk, funk and pop that's part Die Antwoord and part Skinny Lister.

As the evening and weekend draws to a close, it's time to grab one final Eierbal and reflect on the previous four days. Groningen, you have been fun...

The Proper Ornaments' Track By Track ...