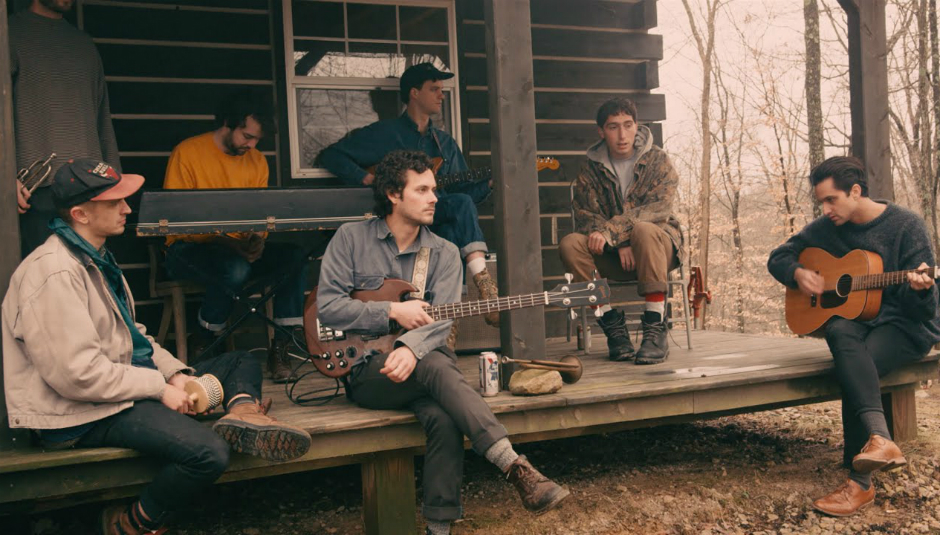 Whitney have been everywhere this year, or at least that’s how it feels. With over 200 shows played in support of debut album Light Upon The Lake, it was hard to look at a festival poster in 2016 without seeing them somewhere two-thirds of the way down.

Then again, maybe it just feels like they’ve been everywhere because in my case they have; in my ears, my brain and on my lips when I’ve been harping on about them at festivals. In a year that I’m gonna say is average-at-best for albums, with a dearth of artists dropping fully formed bodies of work that sound like theirs alone, Whitney feel like - with a nod to Car Seat Headrest - this year’s sleeper indie hit.

When debut single 'No Woman' dropped in February, it resonated instantly; its smokey, mournful country tones reminiscent of Townes Van Zandt, The Band and perfect for those bedeviled by the mid-winter blues.

I saw them shortly after at the Green Door Store - only knowing 'No Woman', and with no idea what they were about - and instantly knew it was soppy, bromancey band-love. Six of them were dotted across this little stage, bobbing, drinking tins, and trading licks. It looked a gang of buddies jamming together, twisting out apple pie country jams that charred holes in your chest one minute and had you dancing the next.

If you’re familiar with the band you’ll likely know that two of those friends are Julian Elrich and Max Kakacek; both were previously in cult glam-punk heroes Smith Westerns, whilst Elhrich also played the drums in Unknown Mortal Orchestra. When the Smith Westerns were still together Elrich moved into the Chicago flat that Kakacek shared with Smith Westerns’ lead singer Cullen Omori and slept on their living room floor. Eventually the band broke up, Omori move out and Elrich upgraded to the bedroom.

The story goes that Erich and Kakacek then both broke up with their girlfriends and, faced with the prospect of a baltic Chicago winter, batted down the hatches and spirited up the songs that were to become their debut album Light Upon The Lake. As with all band myths, there’s no doubt no more to the story, but that’s the bones of Whitney’s tale and, yes, it’s a fine one.

When the album dropped in June it was met with largely favorable reviews; an 8.3 in Pitchfork memorably described it thus: “This is the Corona of rock records, as Whitney consistently walk that fine line between identifiable and platitudinal.”

I thought the writer nailed it at the time and I’d say the same today. It then goes on:

“Take the chorus from most recent single 'No Matter Where We Go': “I can take you out / I wanna drive all around with you with the windows down / And we can run all night.” It’s so generically wistful that it could provoke an eyeball, but it’s delivered with such gentle earnestness that it’s improbably touching.”

These sentiments instantly reminded me of Heartbreaker-era Ryan Adams. For those fortunate enough to know Adams’ solo debut: remember the woo-woos and show-off parenthesis of ‘To Be Young (Is To Be Sad, Is To Be High)’? The homesick yearning of ‘Oh My Sweet Carolina’? The plucky angst and further show-off parenthesis of ‘Damn Sam (I Love A Woman That Rains’)? There’s a youthful, slightly knowing vulnerability to it all, that made Adams so very appealing, and it’s something that Whitney - all aged between 24 and 27 - have nailed.

Where they go now will be interesting.They’ve been on the road for so long with a relatively lean set of songs, you’d hope next summer’s festival tour - they’re already announced for Primavera and Field Day - would have some new tracks. Also, and this is more of a quandary than a criticism: where do you go with a sound that’s so stylized and unique? That combination of sweetly nasal falsettos, thick country licks, and sunrise trumpets isn’t for everyone. Fortunately, it is for me; a friend recently described their music as like warm gold, and that feels about right.

I’ve seen them three times year, each time in a different stage of the band chrysalis. From their new band coyness at the Green Door Store to a grizzled posse at The Haunt in November, where Elrich was noticeably struggling; his voice straining and crackling whenever he hit those formerly-buttery high notes. At one point he asked the crowd if they had a tissue, and when someone through him a pack he reassured us all it was “because I’ve got the sniffles, not ‘cos I’ve been taking coke.”

To be fair, the rest of Whitney look a bit pale and sniffle-stricken too, carrying the air of a band who have spent the last eight months passing round colds (and no doubt lots of spiffs) in that illness percolator we call a tour bus.

In between these two shows, though, I caught them at End Of The Road, and it was one of those shows you’re worried you build up too much. Beforehand, my friend Joe and I - Joe is my ‘Whitney friend’. You know how you have certain mates that you bonded over with a band? Well, Whitney is our band - had been kicking up excitement dust for weeks about their Friday afternoon set.

We both knew we were in danger of over-egging it, that they would disappoint in the face of perhaps unreasonably high expectations, but they played the most perfectly joyful set. They were clearly pumped to be there, and bounced off the energy from a crowd that were happy to be told this many times. Elrich’s voice never wavered, and as the final chords of ‘No Woman’ ran out, the people I was with turned to each other and breathlessly ruminated on whether Whitney were, in fact, our favourite band in the world right now. Now, I’m not going to admit that I wasn’t quite drunk and possibly a little high, but in that time and place I meant it. And looking back, four months later, I’m not sure I’d change my mind.