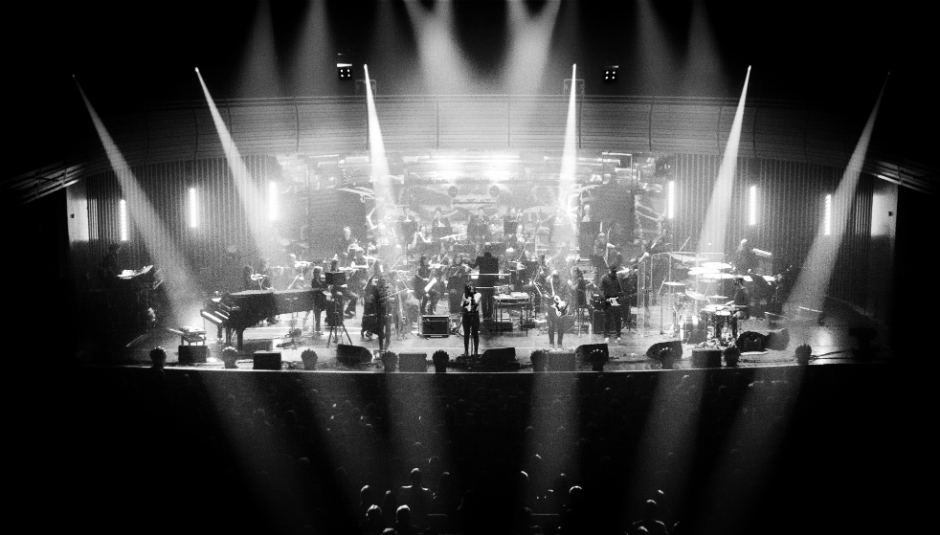 It’s a pointed fact that live albums are a tricky business, if not a flat-out risky one. Orchestral live albums? Urgh. Overblown and highfalutin, they’re too often the errant result of deliriously daft backstage ideas after a band enjoys their rider a little too much, too often. With thin ideas bloated by commercial success, they’re the foie gras of rock. Think Metallica, ELP, and Yes; indulgent doesn’t begin to cover it. In tight times, amidst a forensic focus on social media “reach”, streaming figures, and brand synergy, what sort of act would think that such a baroque and involved treatment of their songs would be a good idea? Step forward Lanterns On The Lake.

Or should that be shuffle? One of the UK’s best purveyors of widescreen dream-pop – and for whom widespread success remains bafflingly elusive – their thoughtful, ornate music reached another apotheosis with last year’s excellent Beings, their third. It also goes hand-in-hand with a low-key, almost apologetic style. So just how did a self-effacing indie band end up blinking into the stage lights at The Sage – a large, purpose-built concert hall and music hub in their native Gateshead – flanked by the august Royal Northern Sinfonia?

“The Sage have been really supportive of us as a local band for a while,” says singer Hazel Wilde. “They put us on in their smaller room in 2011, and we played the main room in 2013 – but I don't think we were quite ready for that. We'd been convinced to do it, and on the day I felt really unconfident about playing, so I drank a bottle of wine and took some beta blockers to ease the nerves. Suffice to say I felt pretty detached from the whole experience. The people at the venue were keen to hear Beings before we'd put it out, so Simon [Raymonde] at Bella Union passed it on to them, then conversations began.”

Like all worthy artistic endeavours, such a new project brought a broad sense of personal challenge, so did that previous bad experience cloud the preparations? “It felt weird at first,” Wilde admits. “I also think that, like a lot of people in bands, we feel like we’re just winging it, like we’re frauds. No-one wants to get caught out – going into that situation makes you feel exposed. We come from such different worlds to the orchestra players: there was us, this shy, obscure indie band coming in to work with such a renowned orchestra.

Where Wilde does herself and, by extension, the band’s material down – albeit inadvertently via that all-pervading thoughtful mentality again – Is that Lanterns On The Lake’s music is actually perfectly suited to being taken in just such a bold direction. This is serious, literate pop music for serious times: beautifully austere, inventive but direct, and politically and personally charged. At its best, it’s freighted with importance.

Despite feeling overawed and knowing that the imposter syndrome needed to be faced, the collaboration found its feet as the band began work on scoring with Fiona Brice, an acclaimed violinist, arranger and composer who has also worked with John Grant, Midlake, and Vashti Bunyan. “She totally got what we were about and was really open to all our ideas. She was keen to explore them and make them happen,” says Wilde. “She really was the bridge between our world and the orchestra's. We were able to push the songs and add all the nuance and intensity that you imagine when you’re writing – all those textures and colours that are in your head come to the fore.”

The end result is a rare thing - a live orchestral album that makes perfect sense on its own terms. In fact, the evening went so well that it was repeated as another special performance at the Bluedot festival in the summer. Rather than being a rote exercise in having standard rock motifs with violins lazily plonked on top, this is instead a fluid and natural extension of the band’s work, realising its sense of ambition in scaling up, but also reinterpreting, an established sound.

The political rallying cry of ‘Faultlines’ is given more urgency, underpinned by the thud of kettle drums, before the floor falls away in a lush finale of brass and strings. The processed vortex of the recorded version of ‘Stepping Down’, the band’s first real foray into electronica, is recast as a whorl of romantic yet threatening strings. The contrast with the album version couldn’t be starker, and it invites new interpretation to a song about the grace found in giving up.

‘Beings’, a DiS-exclusive glimpse of the live album, has a glassy, castaway calm set by mordant piano that gives way to a song that kicks and convulses, roiling with rich orchestration and monolithic slabs of guitar. Wilde fights against the tumult, matching the struggle implicit in the lyric which hints at society’s fractured nature embodied by a doomed romance. As the song shudders to a close it draws 90 seconds of applause from the audience, who have sat in rapt silence throughout.

If the honed discipline of the orchestra rubbed off on the band as the sonic palette was expanded, then the reverse was equally true. The band’s instinctive grasp of dynamics, as well as a palpable push and pull of playing as a tight unit, are both at play, meaning the collaboration feels grounded. This is despite there having been just one full rehearsal on the day before the performance. “You know, sometimes when you hear people play with big string sections it can sound bit too 'nice',” says Wilde. “It wasn't at all too polished – we wanted to keep things feeling raw and real and live. Maybe the lack of rehearsals helped that in a way – it all added to the passion and that 'in the moment' feeling.”

The sweep of ‘I Love You, Sleepyhead’ – a fan favourite taken from the band’s 2011 debut Gracious Tide, Take Me Home – is given an ecstatic headrush of strings and audibly gathers itself before exploding again in a spine-tingling reprise. It’s also testament to the recording that the ambience is captured evocatively, whether it’s ‘Of Dust and Matter’s quietly Gothic menace or new single ‘The Crawl’s tidal guitar, it’s refreshing to hear the slink of fingers on a fretboard as keenly as the sound of an orchestra at full tilt.

But the album doesn’t just document a rare opportunity for a band to realise an ambition, or even simply capture the essence of a moment. It's the sound of a band maturing to meet a new challenge. It’s also affecting, as it’s the sound of the preternaturally self-deprecating finding a voice that’s expressed in a visceral live experience. In a loud world where (self) proclamation is king, it’s a reminder of how the quiet, the thoughtful, and the nuanced can all get lost, to everyone’s detriment.

Despite these virtues, the project almost never happened, which in itself is an indictment of the music industry’s direction of travel. “PRS funding helped us out, and that's why that kind of support and arts funding is really important. The UK is way behind in that area compared to other places like Canada and Scandinavia. You know the old protest song ‘Bread & Roses’? There's a lyric in there that goes ‘Hearts starve as well as bodies / Give us bread, but give us roses’, and I think that sums up that idea perfectly,” says Wilde.

“Because of the current struggle to make a living from music and the way things may go with touring on the Continent following Brexit, I think that for small to mid-sized bands like ours our days are numbered. The only successful bands will either be those from more privileged backgrounds who can afford to keep plugging away, solo artists who are more likely to be able to make a go at it because their setup allows them to keep costs down, or those artists that follow a certain sellable formula that labels feel safe to invest in.”

So are projects like this – even bands like Lanterns On The Lake – no longer viable? “This upcoming tour is likely to be our last for a while,” says Wilde. “Labels understandably can't afford to put loads of money into bands like they used to, not unless they're sure it's going to pay off. This makes them less likely to take risks and more likely to invest in something they've seen work – hence you get a bunch of artists all occupying the same kind of space.

“Britain has a history of bands and artists from all backgrounds and approaches that have come along, changed things, and enriched our culture. I don't see how that can happen in the future unless there is a massive change in the business model. Bands just can't put all their time into writing, recording, and touring when they have bills to pay and they're working full-time. They can only take it so far. I think we'd all benefit from having more variety making it into the mainstream.”

It’s a sad and worrying appraisal, but one that’s difficult to argue with. It also makes this live album a statement as much as an artistic endeavour – it’s one that celebrates music that evolves from both a label and region that nurtures and fosters talent that might not always be in tight lock-step with the mainstream. Let’s hope this is just the sort of ambitious British musical collaboration that doesn’t become a thing of the past - this is diversity that’s worth celebrating, and it’s as distant from being a vanity project as is imaginable. Wilde’s stunning solo performance of ‘Green and Gold’ in the encore also sums up the quiet power that lies at the core of Lanterns On The Lake’s songs, with the prescient lyric “You learn fear is just a fleeting thing” ringing true given the project’s challenges. But these were overcome. “There were no bottles of wine and beta blockers this time,” she agrees. “It just felt right – right time, right songs.”

Lanterns On The Lake tour the UK later this month, and the Islington Assembly Hall gig will feature extra brass and string sections. The live album of the Sage show is released on the 25 of November.