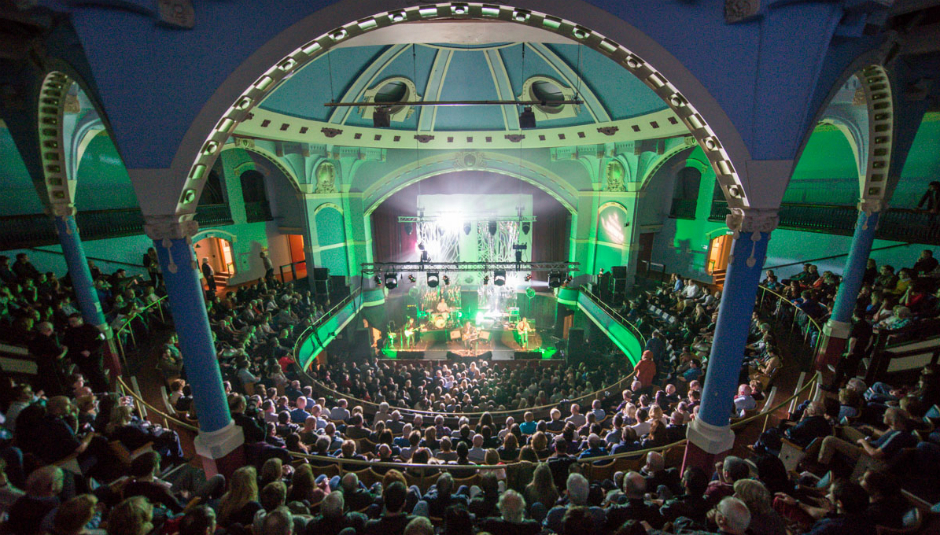 Now entering its eleventh year, Liverpool Music Week is fast becoming an institution in its own right in a city awash with musical heritage, but that’s often overlooked by international touring bands in favour of Manchester, thirty miles down the road. It’s one of the few points in the calendar year that the city’s guaranteed a stellar cast of both big-hitting live names, exciting up-and-comers and the odd special one-off, too; 2016’s lineup, as usual, has pulled out the necessary stops to deliver on all three fronts once again.

In a town still reeling from the loss of one of its best-loved venues, the Kazimier, last year, it’s pleasing to note that the organisers are running the gamut on this year’s locations, abandoning the Camp and Furnace in favour of going city-wide, from the historic Olympia theatre to the recently-renovated North Liverpool Docklands, with everything inbetween ranging from the intimate confines of LEAF and the Arts Club Loft to The Dome at the city’s Grand Central Hall, where things kick off on October 26th with the festival’s opening party. Here, DiS takes a look at the highlights announced so far - as well as what’s still to be revealed.

The legendary director arrives for a short UK jaunt as the self-described ‘Master of Horror’, and it’d take a brave man to argue with him; the man who helmed the likes of The Fog, The Thing and Village of The Damned is an icon of the genre and, not missing a trick, has scheduled his performances right around Halloween time. When else? Having composed the scores to many of his most famous works, Halloween- included, expect to hear a set heavy on terror but that touches on some of his sci-fi work too, particularly Escape From New York and Big Trouble In Little China_. Bringing with him a full live band and fully immersive visuals, these shows are unlikely ever to be repeated, representing a real coup for LMW. He performs in the grandiose surrounding of the Olympia on Friday, October 28th.

The curtain goes up on this year’s festival with the opening party at the Grand Central Dome on Wednesday, October 26th; full details of the kick-off have yet to be announced, but it’s LA’s Warpaint who’ll headline the beautiful old room in the heart of the city. Fresh of the back off the release of third LP Heads Up, the avant-garde four-piece have been revitalised by time spent away working on other projects, and should bring a career-spanning set to Liverpool; they’re an intoxicating live presence wherever they play, so the atmospheric surroundings of the Dome should add something genuinely special to proceedings. Expect an impressive undercard, too, led by local trio All We Are.

In another scoop for the festival, fuzz-rock legends Dinosaur Jr. will play what, by their standards, is an intimate show at the 1300-capacity Arts Club. Out in support of Give A Glimpse of What Yer Not, which met with rave reviews back in July, the band have now been back in their classic iteration of J Mascis out front, Lou Barlow on bass, and Murph behind the kit for longer than they were back when they first started out, before acrimony saw Barlow exit stage left. His return to the fold has reinvigorated the indie icons, with Give A Glimpse and its 2012 predecessor, I Bet On Sky, ranking amongst the great critical triumphs of their career. A word of warning, though – earplugs should be compulsory, with Mascis not a man known for his compromising attitude to the volume dial.

The where and the when are already in place for the festival’s last hurrah; it’ll take place on Friday, November 4th, meaning that actually, ‘Liverpool Music Week’ is a bit of a misnomer, but let’s not split hairs. It’ll be across town at the northern end of the city’s famous docks, the same location that’s hosted Sound City for the past couple of years. The who part of the equation has yet to be revealed, but with closing party alumni including the likes of CHVRCHES and Deerhunter in years gone by, it’s little wonder that the £6 early bird tickets flew out. Expect more on sale when the lineup’s out, and probably have a think about wrapping up warm before you venture down to the waterfront while you’re at it.

Quite why this special collaboration continues to slip under the wider musical radar remains a mystery; back in June, their second full-length record, Treasure House, met with rapturous acclaim from critics. The duo comprises The Horrors’ gangly, hairspray-bothering frontman, Faris Badwan, and Rachel Zeffira, who you suspect is the beating heart of the group’s obsession with pop sounds from a bygone era. She’s a perfect onstage foil for her opposite number, too – it’s as if her lilting soprano has somehow tamed his usually feral presence in front of an audience. They’ll play a tiny show at LEAF on Bold Street on Thursday, November 3rd.

Particularly exciting this year are the slew of Breaking Out shows being put together in collaboration with DIY in tiny rooms across Liverpool. You might very well argue that Amber Arcades, or Annelotte De Graaf when she’s at home, have long since done their breaking out bit, with debut LP Fading Lines going down a storm all the way back in January - not least with a perfect ten out of ten right here on DiS. Home for De Graaf, by the way, is Holland, where she works for the international war crimes tribunal. You can catch her in the tiny Arts Club Loft on Saturday, October 29th – unless, of course, Blair and Bush finally get hauled in at The Hague, in which case she might need to reschedule.

Sometimes I feel as if I’ve missed my way in life and never more so than when I see people being very cool very young. I certainly wasn’t making experimental pop when I was seventeen, which puts me well behind Rosa Walton and Jenny Hollingworth in the queue for much-coveted indie points. The Norwich duo are heading out on the first UK tour proper later this month, with a stop at LMW for a DIY Breaking Out show – again at the Arts Club Loft – on Saturday, October 30th. Expect off-kilter melodies that flit between dreamy and doomy quick enough to have you wondering whether their moniker really is a nod to the old reminder to use commas in direct address, or if actually they’ve given serious consideration to cannibalising their poor old nana.

Liverpool Music Week runs from 26 October to 4 November at venues across the city. For tickets and more information, visit the official website.