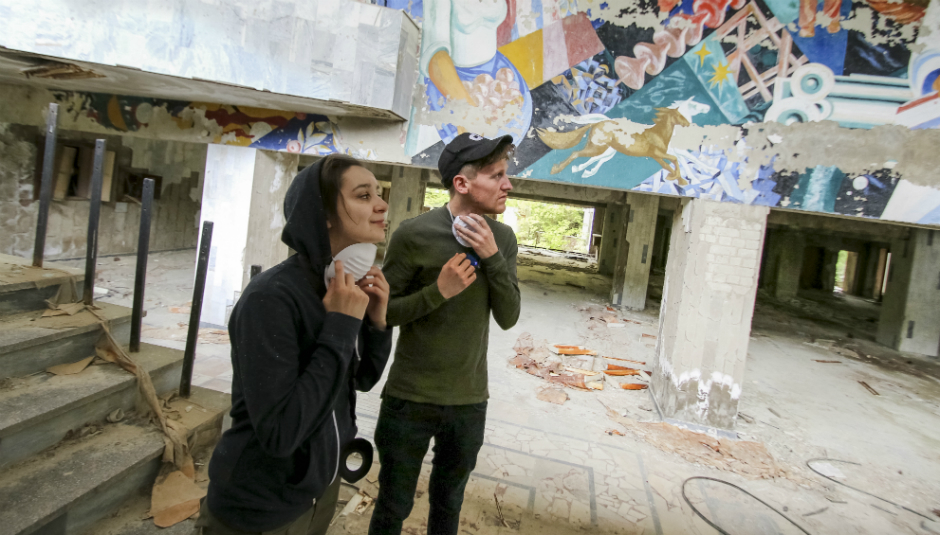 “It’s difficult to get these powerful stories across”: DiS meets Robin Richards

“It’s difficult to get these powerful stories across”: DiS meets Robin Richards

It’s been just over 30 years since the Ukrainian city of Pripyat suffered the devastating consequences of the Chernobyl nuclear disaster. It’s one of only two nuclear meltdowns classified as a maximum level event, the other being the Fukushima Daiichi disaster of 2011. During the incident, 400 times more radioactive material was released from Chernobyl than was dropped in the atomic bombing of Hiroshima. The effects are still being felt in Ukraine and Belarus. Charities such as the Chernobyl Children’s Project, based in Glossop, have been helping young people from the area take recuperative holidays, allowing them to escape the rising dust radiation levels in the summer months.

This was how neo-classical composer Robin Richards, perhaps best known for being the bassist in chamber-pop group Dutch Uncles, came to learn more about the Chernobyl disaster. “Some family friends of mine had looked after children who’d been affected by the Chernobyl disaster. Children from Ukraine and Belarus travelled to my hometown, Stockport, for recuperative holidays,” he explains. From there, Richards began researching more around the disaster and the city. He became particularly fascinated by Pripyat’s amusement park, which was due to open on May Day 1986. Its abandoned Ferris wheel and rust-covered rides have now become a symbol of the devastation, but it did manage to have some use before becoming abandoned. “When they were evacuating the city they opened the park for just a couple of hours, probably just to distract people from what must have been a pretty distressing time,” Richards explains.

“There was that juxtaposition there that inspired me to read more personal testimonies about experiences, not just of the evacuation but also of the liquidation process, so the clean-up process of the reactor and the exclusion zone, a 30km area,” he continues. “I was reading that and looking for inspiration for a new piece of music.” This initial spark is what eventually lead to the creation of Birdsong: Stories From Pripyat, a film by Clara Casian for which Richards has written the evocative score.

Richards met filmmaker Casian almost by chance. While promoting the last Dutch Uncles album O Shudder in early 2015, he’d also been working on scoring Lonesome (a silent film from 1928 by Hungarian director Paul Fejos) for HOME in Manchester. “I’d really enjoyed that process and the idea of scoring any films, not just silent films,” Richards says. “I got invited to an event organised by HOME, which was called Feature Expanded. It was basically a group of directors and visual artists who were just in the process of making their first feature length film.” Casian had developed a project on alternative publishing and censorship for Feature Expanded and, after Richards was also invited to the dinner (“a kind of networking event”) the pair met. “I talked to her about this project and she sounded interesting. I looked at her website and checked out other projects she’d been involved in, which was mostly a mix of found footage and archival footage, creating film collage. I thought she’d be the ideal person to work with.”

Their mutual interest in Pripyat and desire to create a film about the area led them on a four-day research trip to the exclusion zone in May. They spent a couple of days there exploring the city and filming new material to be included within the 40-minute film. “It was an incredible experience. We stayed in Kiev, which is only about an hour and a half drive from Pripyat and Chernobyl.” One of the first things that struck Richards was the way in which the city had become overgrown in its abandoned state. “It is pretty surreal! It’s like nature has just taken over,” he says. “There’s plenty of animals still living in the exclusion zone. People have said they’re thriving there but they’re not necessarily that well. When we went we could only stay there for a couple of hours at a time because the radiation levels were still quite high 30 years on. It’s a crazy place to be!” It wasn’t long before they were taken to the city’s most iconic area. “As soon as we arrived there we were taken to the amusement park, which is obviously the tourist centre of Pripyat. Some photos you see just don’t give you an indication of how big the city is though. We went to areas like the old theatre, the cinema, the music shop. Nature’s taken hold of these areas, but it’s very interesting.”

Casian and Richards were keen to talk to civilians about their experiences of Chernobyl, to try and incorporate their testimony into the film. They were, however, more nervous about approaching liquidators, the people tasked with cleaning up the disaster. “We were kind of concerned that they might just get this all the time,” he explains. “But there were thousands of people involved in this clean-up and so many of them wanted to tell their story. We met four liquidators who told us their experiences and it was quite moving.” While many of the liquidators had similar stories to tell, the lack of proper protection afforded to them was particularly striking to the pair. “They weren’t really told how dangerous and radioactive it was,” Richards says, “and they weren’t given proper protective gear to fend off the radiation. They didn’t have any gas masks or body suits. They were cleaning up these areas sometimes just in their pants! It’s crazy!”

The pair also met local artists and filmmakers, some of whom were equally happy to help. “We met a guy called Volodymyr, who kindly gave us some of his archive footage to work with. He filmed around Chernobyl about five years after the disaster. He’d been there several times and met so many interesting people. He’d lost a lot of friends of the years as well through these experiences.” They also met a young Romanian called Adrian, born in 1986. He’d been blind in one eye since birth after his mother had driven close to the exclusion zone while pregnant. Now a filmmaker, “he was going around making a documentary about other people his age who’d been affected by the disaster.”

Inspired by what he’d seen and heard, Richards began the task of composing the 40-minute score. But, as he says, “it’s difficult to get across some of these powerful stories.” Both he and Casian were careful not to be seeming to take advantage of the people they’d talked to. “Once we were out there, we were getting more footage and seeing how to link old shots with new shots to try and tell these stories without exploiting anyone.” Perhaps as a result, Birdsong is an almost silent film, using occasional subtitles but mostly telling its story purely through the images and music. “It can be powerful enough without an actual voice there,” Richards says.

Since Birdsong is voiceless in the traditional sense, Richards has designed his score with a variety of motifs to represent the main aspects of the stories, not entirely unlike Peter & The Wolf. “Once we were in Pripyat I recorded ambient sounds,” he explains. “I was recording the sounds of the birds, who have recently flocked back to the exclusion zone. I was using those melodies that the birds were singing as the main motifs.” There are also other distinctive motifs used to paint a fuller picture of the disaster: “I’ve used synthesisers to represent nuclear power and radiation, and I’ve used acoustic instruments to represent land, humans and wildlife.” The mix of organic and synthetic sounds can be heard on just one short segment of the score, ‘Liquidators’. Stabbing strings clash with discordant synths at first but soon meld into symbiotic waves, representing the liquidators’ struggle against the force of radiation.

Despite being interested in challenging the idea that music should be in service to visual media, Richards’ soundtrack doesn’t clash with Casian’s images, but instead serves to enhance them. They worked closely together through the whole process to make sure that each element of Birdsong fitted together to tell a cohesive narrative. “I’d write ideas for certain movements of music and then she’d put together footage responding to the music, and the other way round,” he explains. It hasn’t always been easy to make sure their work complements each other, though. “We were at a stage of editing a couple of weeks ago where we felt that it was a bit like a film and a piece of music. We’ve worked hard since to make sure that they do work really well together and that it’s the holistic project we wanted it to be.”

At the time of speaking to Richards, there’s little more than a week to go before the first screening and performance of Birdsong: Stories From Pripyat, but there were still some elements that needed to come together. “The rehearsals with the ensemble start next week, so the last few days we’ve just been sorting out the rest of the film really and making sure there’s no mistakes. The way we’ve worked on the music alongside the film has meant that it’s had the same deadline.” But there’s also another deadline looming for Richards. “I was looking at my calendar recently and we’ve got the same deadline for the new Dutch Uncles album to be finished as well!” he laughs.

It’s been little more than a year and a half since the band released their fourth album O Shudder, yet they’d already been playing new material at their shows last December. These new tracks were faster, and more guitar-driven than the complex synth-and-strings approach of their last record. They’ve never even played three songs from O Shudder live due to the sheer amount of instruments employed. “What we’ve found with O Shudder – which we are still fond of as an album – was because everything was so precise and clinical when recording, it took us months to work out how to play it live,” Richards says. “We were all playing ten things at once to cover how expansive O Shudder was.”

O Shudder was indeed another step away from some of their earlier works. Yet their debut single ‘Face In’ and songs from their second album Cadenza, such as the fast and furious ‘Dressage’, still remain firm favourites at their shows. As a band, they wanted to inject some of the vitality of their earlier works back into their new material. “We just wanted that live energy back,” Richards says. “I think that some people quite like our live shows and there’s some tracks that we still play from our first and second albums that are still highlights. We wanted to make sure these new songs were as strong as they are.” There’s still been a meticulous approach to creating the new record though: “we’ve spent months rehearsing as a band. That way we knew what instruments we didn’t need for when we come to play it live.” And the end result? It’s decided knowledge that it’s “not stripped back, but it is a lot faster, more uptempo.”

Birdsong: Stories From Pripyat will be screened and performed at HOME, Manchester on 30 September, Stockport Plaza on 6 October, and the University of Salford on 7 October.