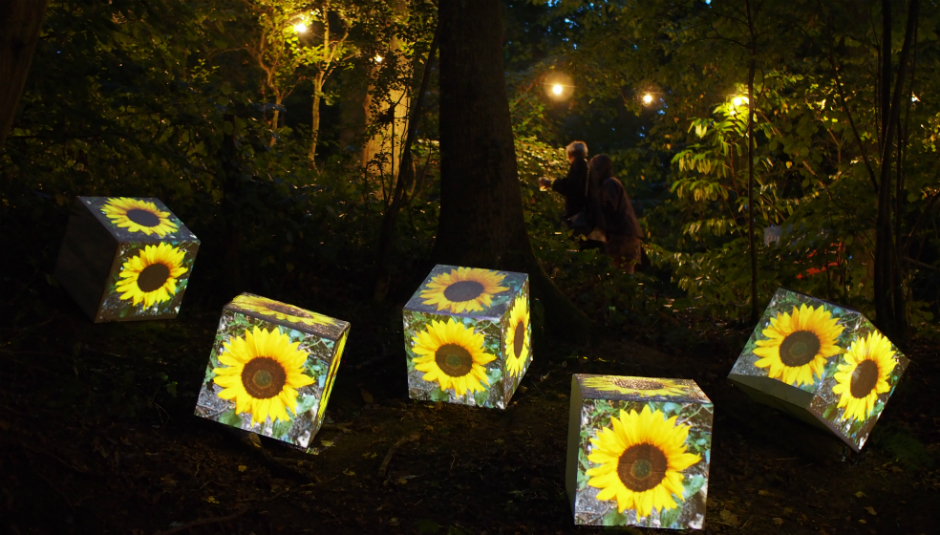 The woods drip with rain-refracted light and autumn leaves. Time Flies. Suns rise and shadows fall, final touches, costumed bodies, stages set and kindling covered… and the minivan driver says ‘Is this it?!’ as he pulls up to the site and tumbles us out onto soggy grass and wood chippings.

In The Woods 2016 came to a woodland near you (if you live an hour south of London in an undisclosed location) at the start of September, just in time for the week of autumn before the climate-change-induced Indian Summer is due to hit. The ticket price is creeping up along with the festival’s popularity, but it's still the same DIY affair we’ve come to love, if a little more polished this time around. If you’ve not been, think Latitude's little sister, a bit prettier, maybe even cleaner, and at least as middle class. And on its tenth birthday, what began as a grassroots get together for friends and family has grown up into a fully-fledged festival.

The secrecy of the line-up and location adds to the anticipation: buying a ticket is putting your trust in The Laurel Collective to deliver a great experience. But this isn’t much of a leap of faith if you’ve been before – indie kids The Laurel Collective and their friends Tim Adam-Smith and Will Brown are a safe pair of hands when it comes to delivering a cracking weekend (no reference to the Prime Minister intended – these guys really are a safe pair of hands). With the aim of spontaneity and as a leafy platform for upcoming and under-discovered talent, the line-up is always eclectic and with a sprinkling of gems to suit most tastes.

But it’s definitely not all about the music; it’s as much the location and the love that’s been put into its prep. As we step from the inauspicious entrance onto the woodland trail we’re reminded of how well the ITW folk move in harmony with the seasons. For their decade celebration, the trees have been draped with lights and lanterns, canopies of flowers, and flashes of fish coasting through the rain. And it’s peopled with cheeky elves and goblins lounging by the trail, there to help you out, show you the way, or startle you with stories of coppice relics as you pass. Was that a bust of Roman Goddess Diana, deity of the hunt? What’s with the constellations of stars shining from the eyes of that giant rabbit head? And how have the beetroots in the sound garden been transformed into a rowdy “beetbox”? It’s a curious world for exploring, even if the rain is getting in down the back of our necks.

But the weekend isn’t all storms and galoshes. In fact, the final smattering of rain gives itself up before the campsite has properly filled. Wellies off, strings of flowers prodded into heads, and it’s time to see some bands…

Benjamin Francis Leftwich kicks thing off. The youthful singer-songwriter’s had a rough few years but the result is a heartfelt, soft yet searing sound, a fragile interplay between voice, guitar, and subtle synth. Watch out for future albums there. But Friday night is really all about The Invisible + Friends’ Prince and Bowie tribute. A festival-within-a-festival, the stage was crammed with musicians, choir, and a whole lot of dancing. It’s a celebration of some of the best music around topped off by outstanding vocalists – we’re looking at you Eska, Rosie Lowe, Sivu – who lead a worthy tribute with the kind of creativity that filled us up to our eyeballs with positive energy, even though it may have been a little short for some tastes.

Friday night also sees the kicking-off of a whole range of fun and games. Because, of course, festivals these days are never just about the music. ITW’s brand of fun sees it host a pub quiz and barn dance on the Friday night, and a spot of yoga in the morning before the dew has a chance to drop. The tea tepee is always up and running – did those guys ever sleep? – pouring out gallons of cafetiere-brewed coffee, limitless rounds of their heartening cakes, and flapjack. You can take in a round of golf or giant connect four, go record shopping, stroll through avenues of freshly planted sunflowers so alive they look fake, listen to the dells thrum with theatre and poetic interlude, or watch the video installations bring the thickets eerily to life.

In fact, ITW could do a lot more to shout about their poets, who don’t appear on the programme but were a brilliant distraction for overcrowded ears. Don your headphones, take a hay bale seat, and let some spoken word wash your hangover away. Chris Redmond is a highlight with irreverent word tomfoolery, while Tom Gill, actor/poet/all-round funny guy, lifts our spirits with his tube station punning.

But back to the music. The great thing about ITW is that, with confident curation and only two stages, no bands overlap. Just ride the tide between stages (with a bar nestled between for en-route refreshment).

The early afternoon saw Willie J Healey and his band coax an amazingly rich sound out for an echoey festival stage. All swagger, on point and alt rock, these guys know they’re talented and aren’t afraid to show it. In a totally different vein, Dreller brings a curious kind of ponderous experimentalism into the woods, a serious change from the ex-Papa vs. Pretty front man’s indie rock of old. It’s dance that’s not quite danceable enough in my books, but with a visual artistry-filled world tour selling out fast, he must be doing something right.

There were a couple of highlights missing from the weekend, though. Mooted to appear but sadly missing from the day are The Big Moon, who are making some pretty big ripples in the music world. But there are plenty of stand-out performances, such as Let's Eat Grandma, who put on a fantastic set. Sounding like a young Coco Rosie and looking like some-thing out of The Ring, this ethereal twosome build up a wall of well-rehearsed sound around our heads. Sometimes dismissed as style over substance, Let’s Eat Grandma have a style that stands out; they’re multi-talented, mood-building artists with the naivety of youth creeping in just enough to bring a smile.

As the sun sets on Saturday, the lights begin to glow, illuminating glitter-splashed faces and sending the chatter up into the canopy. Jennifer Evans/, the little lady in little tiny shorts, has a voice intense and sonorous, her performance mesmerising. She leaps between impish cheek and angular, angry guitars. With deft skills and a drummer to match, her set has a kick like drinking whisky by a bonfire.

And then there were ITW veterans Francobollo who nail it as always with their joyous, rowdy, energy-spewing antics; the singer’s eye shines like a kid’s at Christmas as they flail about the stage. This is still a baby compared with the big behemoth festivals that roll on over days and nights; everyone is gone by Sunday lunchtime. So what better way to wind up a tenth birthday party than with a spectacular un-announced set by The Laurel Collective themselves – their first in four years – a nostalgia-fest from The Cribs, and a boozy bonfire covered in giant candles. The kindling takes, sparks fly up into the night, and all of the fun is had late into the night. ITW, you outdid yourself once again and showed us that spending time close to nature is a very good example of how to live.