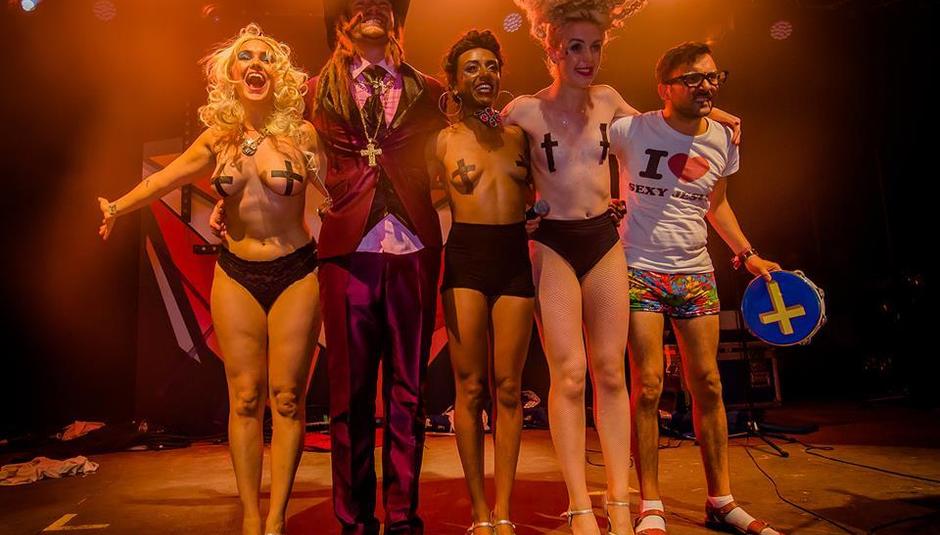 Last weekend, DiS headed to the sleepy rural Cambridgeshire village of Abbots Ripton for the 13th edition of Secret Garden Party. So called becaise it takes place in the gardens of a Georgian farm house and everything about the event itself from what's on, where and when is kept pretty secretive until revellers are on site.

Having heard mixed reports from various people who'd attended Secret Garden Party in the past, I ventured into the unknown apprehensively and returned frankly overjoyed at having witnessed and experienced one of the most enjoyable weekends of the UK festival season.

So without further ado, here's ten reasons why you should lose your inhibitions next year and just go with the flow. You won't regret it.

Yes, as with Bestival, which also started in the summer of 2004 and shares a similar "laissez faire" vibe (more of which later), Secret Garden Party has an annual running theme. This year's being science fiction or The Gardener's Guide To The Galaxy as its been renamed solely for the purpose of this weekend. Which meant woodland stages like our favourite, Where The Wild Things Are heavily decorated in all kinds of scientific space garb. It doesn't get any more spectacular though than the sensational fireworks display across the lake next to the main stage that illuminates Saturday evening. 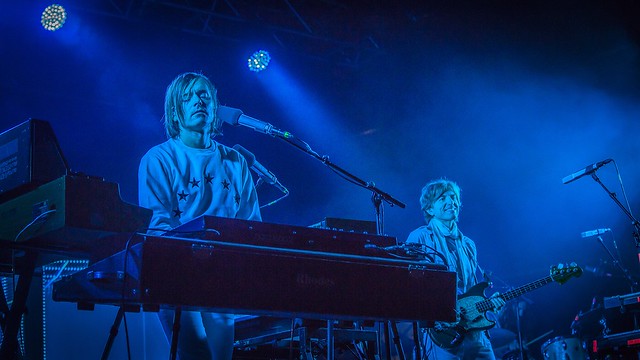 It Isn't Just About The Music

It really isn't. Secret Garden Party is a completely different experience to anything else the UK festival market has to offer. Indeed, at times, the music is little more than an aside. Which probably isn't what the 250+ acts booked across its numerous stages and areas don't want to read. For starters the Spiritual Playground, which can boast naked yoga, kale communion (really!), glitter wrestling and meditation sessions among its many activities. If that's not your bag - and for DiS we were more casual observers than willing participants - then there's always The Forum, which plays host to ten hours worth of spoken word sessions every day, all scietifically themed of course. Followed by a selection of feature films including The Hitchhikers Guide To The Galaxy and The Martian. Failing that, you could always head to one of the Action Camps where enrolment in the Mermaid School or Nubile Venutians is mandatory. Or at least should be. Meanwhile, the Shala Tent specialises in all kinds of creative workshops for a tenner a pop, our favourite of which being Hip Hop Yoga that literally proves opposites can sometimes attract. 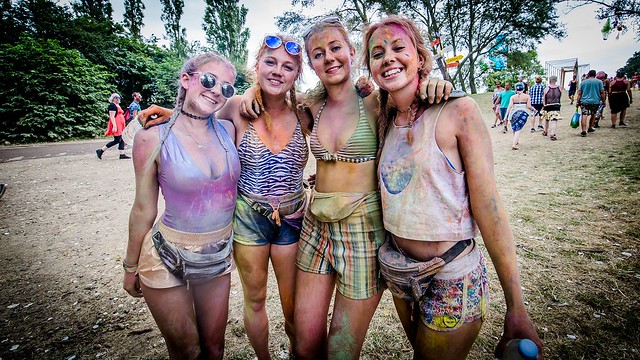 But When it Is, It's Second To None

Drowned In Sound predominantly being a music publication meant watching bands was high on the list of priorities. And it would be fair to say Secret Garden Party delivered on every level, particularly when it came to introducing its audience to new artists. Three of this year's early album of the year contenders Amber Arcades, Money and Fews all delivered incredible sets showcasing their respective long players to full effect. While Nottingham based electronic outfit April Towers and London four-piece Inheaven both played storming shows that can only muster high hopes for when their debuts come out in the none too distant future. Manchester outfit Pins continue to blossom into one of the most energetic post punk bands to grace these shores in a long while and Stealing Sheep's transformation from quirky folk troupe into dancefloor hedonists is all but complete if Friday afternoon's set on the Next Stage is anything to go by. However, it was left to Welsh troubadour Meilyr Jones to steal the show as has been the case at the majority of events he's played this summer. 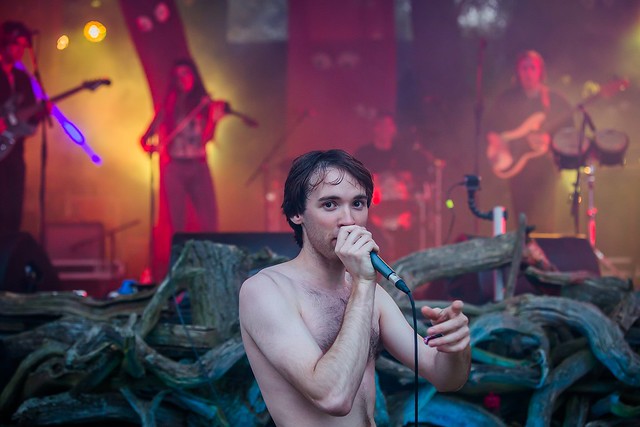 The headline acts also played their part in keeping the party alive. After Saturday evening's glorious fireworks display, Caribou provided the perfect soundtrack, ending on a blistering 'Sun' which kind of summed up the elements somewhat. The previous evening, DJ Shadow wowed all and sundry with a career spanning set on the Next Stage that made us yearn for 1998 all over again. While Air reminded us on Sunday night why they've been held in such high esteem for the past two decades. Particularly the triple whammy of 'Kelly Watch The Stars', 'Sexy Boy' and 'La Femme D'Argent' which closed the set and enveloped the weekend in happy faces and all round good vibes (more of which later).

In amongst the beautiful scenery. And when we say beautiful it really is. Only End Of The Road and maybe Latitude can compare. While last year's event proved a complete washout and probably influenced a few people in deciding whether to return or not, this year's sunfest highlighted Secret Garden Party for what it is. A festival like no other in one of the most idyllic spots in England. Tucked away in the far north east corner of the site was an area called The Lost Woods. Which housed a secret stage which could only be found by encountering various paths and enclosures until its location was found. Also situated in the woods was the Chai Wallahs soundsystem which played host to the likes of Future Dub Project. The Lost Rivers and more and became a hub for those seeking their beats much darker and heavier than the norm. 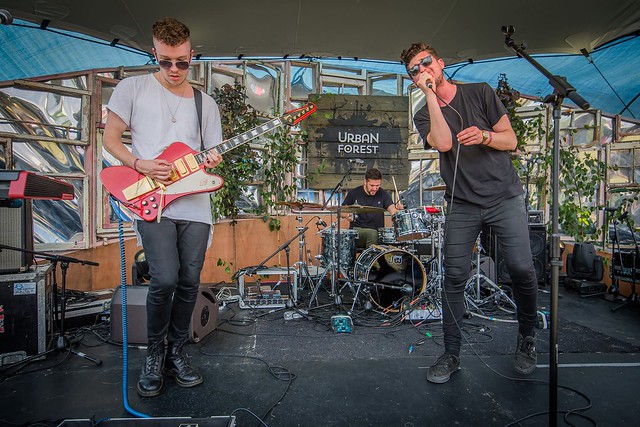 Oh My God! It's The Church

If you've ever wandered around the Shangri-La area of Glastonbury in the early hours. As I'm sure many of you have. It's very likely you'll have come across a collective that go by the name of Oh My God! It's The Church. Essentially the brainchild of Amy Bee Sting and Ben Scott who run the London based interactive theatre company Legs Akimbo. Oh My God! It's The Church are a musical collective that go by the monikers Sister Mary Lou, Sister Mary Faith, Sister Mary Jane, The Reverend Michael Alabama Jackson and Morgan The Organ respectively. Playing two sets here on Saturday in The Kitsch Inn and on The Next Stage, their unashamedly blasphemous show featuring cover versions of Ike And Tina Turner's 'Proud Mary' and The Jackson Sisters 'I Believe In Miracles' goes down a storm both times. As does the "holy communion" session where "blessed" water is turned into absinthe and fed ceremoniously to the baying masses out front. They epitomise the carefree spirit of Secret Garden Party and while not taking themselves too seriously on stage, are a thoroughly professional outfit off it. Go see. 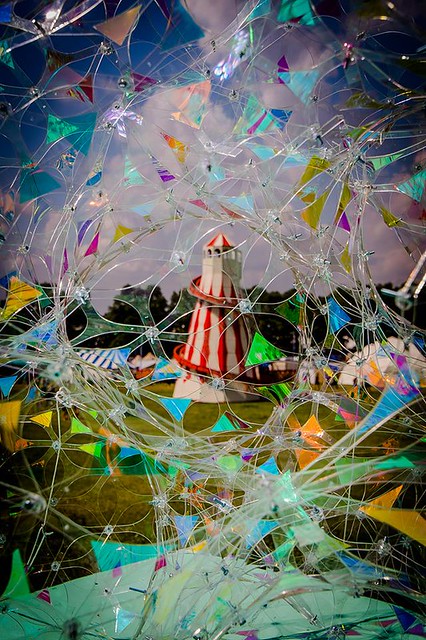 The quality of festival food has risen several notches up the scale in recent years. Gone are the days when a greasy burger accompanied by a bag of semi-frozen chips would be take-it-or-leave-it meal of the day. Nowadays its not uncommon to encounter vendors serving all kinds of dishes from Indian curries to Thai soups, Mexican chillies and beyond. Topping the bill as far as haute cuisine's concerned was the salubrious Milliways Restaurant. Yes, an actual restaurant with candlelit tables and chairs where a main course of Roast Pork Loin, Fennel,Garlic and Spinach Puree would set you back £19.60. But then what else are you going to spend your money on? Warm lager and balloons filled with laughing gas? Exactly. 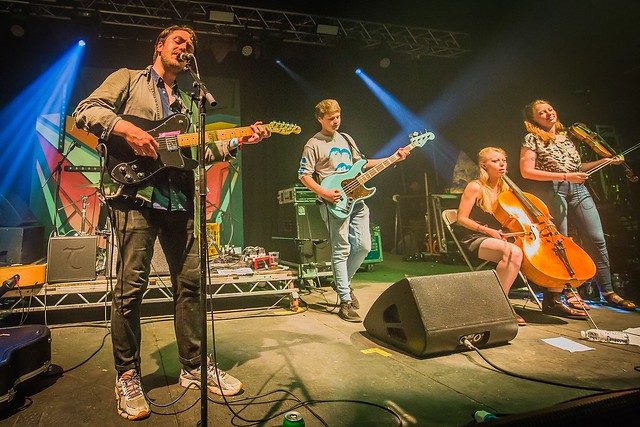 Put a boxing ring in the middle of a field full of 17,000 people and what's going to happen? Easy. A dance-off. Because that's exactly what happened here. With The Dance-Off soundsystem playing a selection of tunes encompassing anything and everything ranging from 1960s Motown classics to seventies funk and soul, early 90s rave and beyond, the concept that shouldn't have worked really did. So, from early afternoon on Friday through to the grand final on Sunday evening, various dance-off battles take place that require maximum audience participation to the point of selecting the eventual winner. It sounds silly and utterly pointless yet DiS is hooked by the end and whatever you think of the concept, beats watching a.n.other indie band stare solemnly at nothing while trying to recreate Coldplay's Parachutes note for note. 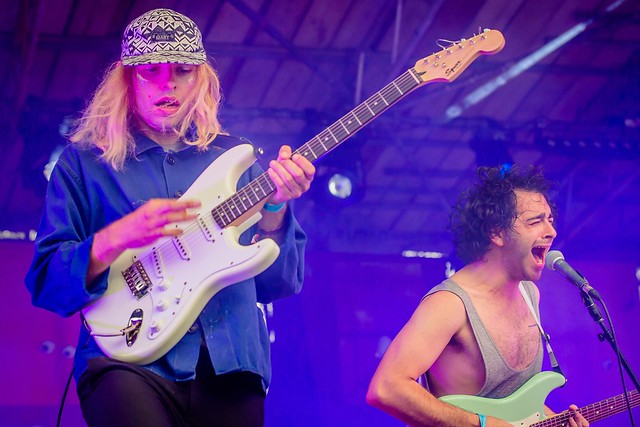 For those of us that remember Reading and Glastonbury from 25 years ago or the now defunct Phoenix Festival not to mention the countless Megadog events and raves at places like Castlemorton, Secret Garden Party offers something of a throwback to those hedonistic, yet community spirited days. Without meaning to sound too pretentious or pompous, there really are no groups of lads on tour intent on spoiling everyone else's fun. Instead, there's a sense of one big happy family all here for the same purpose. New friends and acquaintances are made at random junctures. No one feels excluded or compromised. There are no outsiders. And that is what a festival of this nature should always be about. 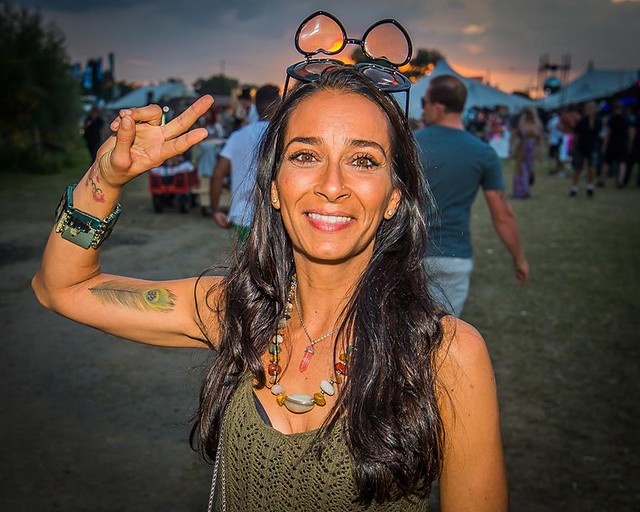 Bathing Under The Sky

Just inside the main entrance to the site is an area known as The Sanctuary. In there surrounding one of the many lakes you will find all kinds of delights serving as treats for those not necessarily at one with mother nature. The Shimmer Shine tent offers a shower and pampering session afterwards for just a fiver. While the Secret Salon takes such necessities one step further if your inclination is to get your hair done at a music festival. What really caught our eyes and imagination though was an area taken over by Bathing Under The Sky, a Cambridge based collective who've been providing ho tub and spa services around festivals for the past four years. With most of their two hour slots already pre-booked before the festival even started, their hot tubs proved to be one of the most popular attractions over the entire weekend, costing as little as £37 per person for the pleasure. 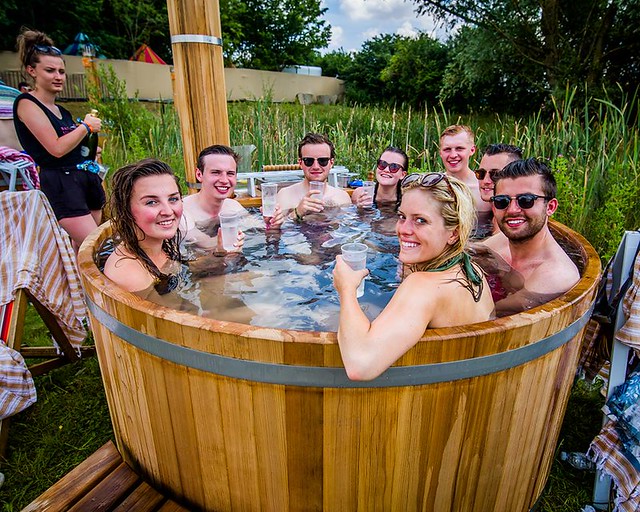 Literally, it doesn't! Even as we leave during the early hours of Monday morning there are still sound systems and impromptu raves popping up all around the site. No doubt fuelled and inspired by the C2H60 24 Hour Bar, which never closes. Secret Garden Party shows no sign of abating even if some of us are flagging by this point and thinking of home and the nice comfy bed awaiting us.

Nevertheless, it goes without saying we wouldn't have it any other way and cannot wait to do it all over again next year. 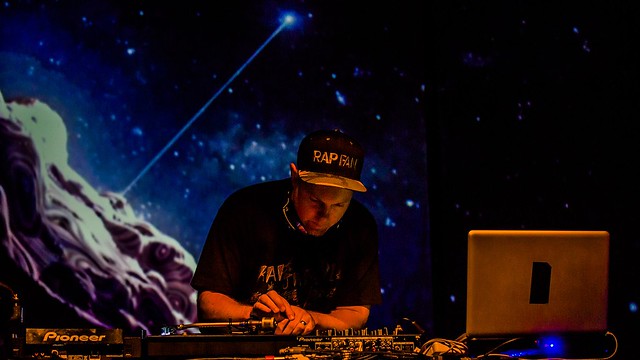 All photos by Shaun Gordon

"There will always be an element of d...